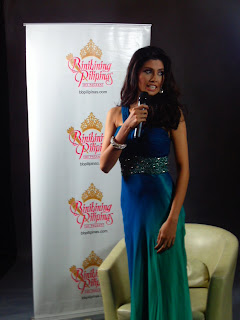 Gearing for Miss U crown
By Earl D.C. Bracamonte


Newly-crowned Bb. Pilipinas-Universe Shamcey Supsup is all set for the Miss Universe pageant in Sao Paulo, Brazil next month. The 24-year-old licensed architect is currently undergoing language crash courses and personality development training together with her royal court.
Print and television media chanced upon a closed-door photo session with Shamcey at the Gateway Suites recently. With her were Bb. Pilipinas-International Diane Necio and runners-up Jenine Togonon and Mary Jean Lastimosa. Miss Universe 2010 runner-up Venus Raj and Bb. Pilipinas-World Czarina 2010 Gatbonton were part of the team that gave the girls expert advice; preparing the titlists for the hurdle ahead.
“I'm currently brushing up on my Portuguese and Spanish as these are the languages spoken in Brazil. I'm also having walking/posing sessions with Venus. I'm doing weight training too. I have to gain weight 'coz I was a little skinny during the local pageant. Luckily, I've gained 7 pounds! After Venus' impressive showing last year, I'm so inspired to do better because I'll be doing this not just for myself and my family but also the whole country,” shared the svelte GenSan lass, during a break in the photo session. The shots will form part of a portfolio that BPCI will send to Brazil.
When asked if she would opt to use an interpreter during the crucial Q&A segment like most Latina candidates, Shamcey was quick in saying that we should be proud of our language. “It's just a medium you use. The content remains the same. Choosing the medium depends on where a contestant is most comfortable.”
Shamcey will fly to Sao Paulo a fortnight before pageant night for the customary pre-pageant activities and elimination rounds. “I'm quite flattered to be compared with equally beautiful titlists from Malaysia and mainland China. They're both very beautiful. The BPCI team is prepping me on how to be more relaxed with the pressures of the forthcoming pageant. I've been raised and taught that to face stress, one simply has to pray and pray with faith.”
Should Shamcey win the Miss Universe crown, she'll be the third Filipina who'll wear the elusive title after the same have been won by Gloria Aspillera Diaz, for the first time, in 1969 and then again in 1973 by Margie Moran.
“The best piece of advice Venus gave me is to be myself and be confident. She said not to overthink as it's a different pageant with a different set of judges. It's always best to think of the Miss Universe as a platform to share our nation's culture and people. Despite this change in my life, my principles remain. They are what define me as a person.”
The Miss Universe pageant will be beamed lived to a nationwide audience on Sept 13th via ABS-CBN's TFC/Kapamilya network. Stay tuned for updates on the telecast schedule.
Labels: beauty binibining pilipinas Filipina pageants