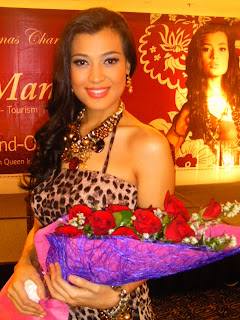 After months of rigorous training in the gym, personality development and public speaking courses, as well as hair, make-up and pasarela sessions, 24-year-old Bb. Pilipinas-Tourism Isabella Manjon is all-set and ready to conquer the international stage in this year’s Miss Tourism Queen International pageant.
Since the pageant’s inception in 1993, the Philippines has had semi-final spots, runner-up positions and one win by Justine Gabionza in 2006. The pageant advocates tourism development and international culture exchange – a fitting choice for Isabella, who’s an ambassador for the Department of Tourism campaign platform.
“My friends campaigned for me through text and on-line; encouraging me to represent the country. This pageant can leave a lasting imprint on Philippine tourism, especially on our efforts on medical tourism,” shared Isabela, who, professionally, is a registered nurse. “All it takes for us to be really big is proper management and constant manpower training.”
Isabela left for China last Dec. 13 to face over a hundred other candidates representing top tourism countries and regions all around the world. The delegates will take part in a charity auction and engage in several preliminary activities that include Talent Presentation, Evening Gown and Disco competitions.
“I know it’s not easy ‘coz you’ll be competing in a cold country and you won’t be spending Christmas with your family for the first time. But you’re a strong woman and I know you’ll make it,” encouraged Bb. Pilipinas 2011 2nd runner-up Mary Jane Lastimosa during the send-off ceremonies.
“I know you’ve put every bit of preparation in the two weeks prior to your departure so you’ll manage beautifully,” well-wished Miss Universe 2011 runner-up Shamcey Supsup.
The Miss Tourism Queen International world finals unfold this Dec. 27 at the Xi’an Quijang International Conference and Exhibition Center in mainland China. Fans and supporters may vote on the Miss Tourism Queen International Web site, www.misstqi.com/vote.php, for the Internet Miss Popularity Award. The candidate with the most number of votes by 5pm on Dec. 27 (Manila time) will automatically advance to the semi-final round.
“This may sound cliché but I believe that one has to try and try again until they succeed. You won’t know the outcome if you don’t give it a try,” intoned Isabela at the end of the intimate colloquy. Like Shamcey, the Binibining Pilipinas pageant last summer was the very first pageant she ever joined.
Labels: beauty contests international pageants pageants tourism