Repertory Philippines (Rep) opens its 46th theater season with “Boeing Boeing,” a farce from a translation by Beverly Cross and Francis Evans, culled from the book written by Marc Camoletti.
What is a man to do when he is in love with three flight attendants? The answer comes easily to Bernard Whitford (David Bianco), a successful Parisian architect, who carries on with three fiancés flying with three different airlines. It’s the 1960s, and the swinging bachelor couldn’t be happier: a flat in Paris and three gorgeous ladies all engaged to him without knowing about each other.
Woe to his long-suffering housekeeper Bertha (Baby Barredo), who reluctantly resets menus and bedroom décor depending on arrivals and departures!
When his old friend Robert (Topper Fabregas) comes to visit and stay, Bernard boasts to his wide-eyed pal how he makes his busy romantic schedule run smoothly by tracking their airline timetables and keeping his fiancés separate using his country house.
But Bernard’s perfect set-up gets bumpy when a new speedier Boeing jet throws off all of his careful planning. Time catches up with him as faster planes are introduced, weather delays occur, and complications arise as the ladies do not respond as he thinks they would.
Soon all three stewardesses are in town simultaneously, and timid Robert is forgetting which lies to tell to whom, and catastrophe looms.
With the girls converging in the same house one night, it becomes exceedingly difficult for Bernard, Bertha and Robert to keep the women separate and the lies told become impossible to reconcile.“Though the milieu of the material was set in the ‘60s, there are still airplanes and air hostesses today so everything’s possible,” enthused Carla Dunureanu who plays, Gretchen, an aggressive and domineering albeit thin-skinned German stewardess from Lufthansa. The two other vixens are Gabriella (Giannina 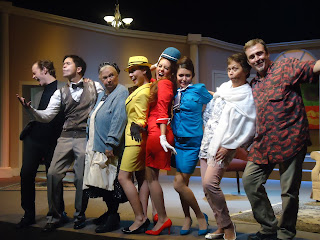 Ocampo), the sentimental and lusty Italian from Alitalia, and Gloria (Jen Bianco), the Southern belle with an upbeat persona from Trans-World Airways (TWA).
Strong turns come from the girls, especially Gretchen who delivers one of her dialogues in a choreographed stunt. But it is Baby Barredo who steals the show and our hearts as well. She pulls the stops in this comic caper. Despite a brief hiatus from the stage, her supposed ‘cameo’ role has turned into a “major character;” a thespian’s resurgence, one might say, and a grand one at that! As there are no small roles in theater (or elsewhere), this only goes to show what a stalwart is like.
As the pre-show voice-over aptly states, “Fasten your seatbelts! It’s going to be a bumpy ride!”
A role originally given to Michael de Mesa, David Bianco found himself portraying the suave swinger when the former got tied up with television work. “It’s a twisted love story of sorts and jumping into the character was relatively easy,” he shared.
A riotous farce that recently enjoyed hit revivals in London and New York, Boeing Boeing starts to enthrall Metro Manila audiences from today until Valentine weekend. “This is a farce! As such, it pokes fun at people on the way they behave and how they handle situations. That’s the fun in this play. However, the material depends much on audience reactions,” intimated play director Miguel Faustmann.
For inquiries and/or ticket reservations, simply call the Rep office through tel. nos. 571-6926 and 571-4941 or email info@repertory.ph. Tickets are also available through Ticketworld at 891-9999 or www.ticketworld.com.ph. Patrons who carry any boarding pass when purchasing the tickets, get a 30% markdown.