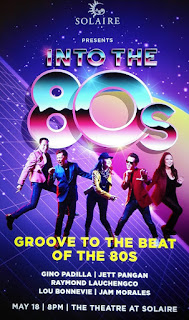 The quintet performed their OPM hits, as well as Billboard chartbusters, dance anthems, and music from the movies. Female stars from the movie "Bagets," Eula Valdez and Yayo Aguila, set the mood for the 80s, reminding everyone of big hair, shoulder pads, and thick eyeliners. 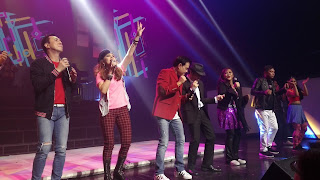 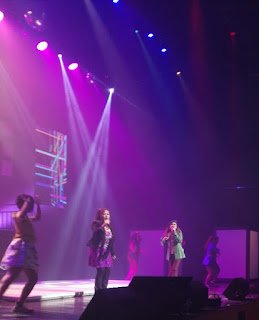 Jett Pangan, lead vocalist of The Dawn, owned the stage with his rendition of Survivor's "Eye of the Tiger" from the Oscar-winning "Rocky" movie while Gino Padilla made smooth dance moves while singing "Ghostbusters." If you still remember, Gino was the Pinoy artist who sang opposite Tina Turner for the Pepsi ad way back in the mid 80s. 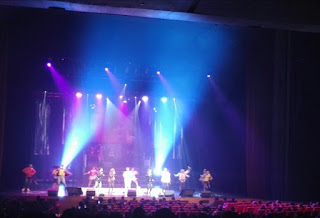 The three gentlemen went light on their feet with their rendition of Kenny Loggins' era-defining dance tune "Footloose." Lou Bonnevie continued the dance moment with Irene Cara's "Flashdance (What A Feeling)." All five singers ended the soundtrack suite with Il Debarge's "Rhythm of the Night." 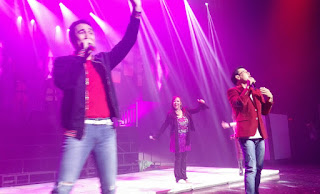 Jojo Alejar of The Tigers, aka Jojo A. All the Way, made a spiel to introduce the 80s club scene. Jett raised the dance fever with Corey Hart's "Sunglasses at Night" and Gino followed through with the Wham's "Wake Me Up Before You Go Go." Lou was all rock glam while essaying Nena's German dance hit "99 Luft Balloons" as Jam went Brit with Sheena Easton's "Telephone." Raymond, on the other hand, nailed the dance suite with Spandau Ballet's "Gold." 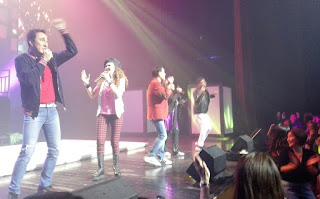 John Robinson, former spinner of The Rumors discotheque, played the night's deejay by introducing the top ten No. 1 hit songs of the 80s, spanning the entire decade from 1980 through 1989, albeit presenting them in reverse order.

The countdown began with Jett performing Chicago's "Look Away" from 1989. Gino then performed "Faith," the song that certified the late George Michael as a solo artist in 1988. Jam then swayed and sang the Bangles' 1987 hit, "Walk Like An Egyptian." Lou and Jet crooned Dionne Warwick's 1986 hit, that featured the voices of Stevie Wonder and Ray Charles, "That's What Friends Are For."

Gino then seduced the spectators with Wham's "Careless Whisper" from 1985 while Jett made a fine reading of Prince's 1984 hit "When Doves Cry." Gino reappeared to mouth The Police's "Every Breath You Take" from 1983 while Jam made a fine act of Olivia Newton John's 1982 megahit, "Physical." Lou smoothly rocked Kim Carnes' 1981 Grammy-winning hit, "Bette Davis Eyes." The two ladies then took turns singing Blondie's 1980 hit "Call Me," from the movie "American Gigolo."

The artists, then, each sang their OPM hits. Jett shared The Dawn's "Envelope Idea" and "Salamat." Lou effortlessly essayed "I Need Your Love" and "Love Me Tonight." Gino sang "Gusto Kita" and the Close-up anthem "Closer You & I" Jam, for her part, crooned her Metropop winning entry, "Smile in Your Heart," as well as "Please Be Careful With My Heart," and "Even If." Raymond beautifully capped the OPM suite with "I Need You Back," "Farewell," and "So It's You."

After the bevy of Pinoy hits, the artists resumed the dance fever with popular tunes. Gino opened the suite with Billy Idol's "Uptown Girl" with Jett following it through with Queen's "Another One Bites The Dust." Jam then lilted Whitney Houston's "Wanna Dance with Somebody" while Raymond did Rick Ashley's "Together Forever." Jett joined Lou to essay "Total Eclipse of the Heart." Lou's soulful rendition of the Bonnie Tyler classic simply brought the house down.

The five artists took centerstage to alternately perform the evening's closing suite Jett started the farewell run with the Industry's "State of the Nation" with Raymond continuing the upbeat energy with Jo Boxer's "Just Got Lucky." Gino escalated the energy to fever pitch with Touch's "(Build Me Up) Buttercup." All three guys then essayed Devo's "Whip It" while the gals did "We Got the Beat" and The Go-Gos' "Head Over Heels."

All five then performed Billy Idol's "Take On Me" as the audience rose to dance to the beat. The dancing continued as the performers sang "Celebration" and "Everybody Have Fun Tonight."

As members of the audience waited for the artists for an after-show meet and greet, snippets from songs in the concert can be heard throughout the lobby, either hummed or sang by the throng. Each one of the songs brought me to another place and time. Sometime in the not-so-distant past when our bodies were lithe and our dancing feet as light as gazelles . . .
Labels: 80s concert Gino Padilla jam morales jett pangan lou bonnevie raymond lauchengco solaire the dawn the theater