The OPM Hitmen, comprised of singers Richard Reynoso, Renz Verano, Chad Borja, and Rannie Raymundo, performed in a pre-Christmas concert at the Music Museum in Greenhills. Simply dubbed "Music for Life," the weekend show was mounted to support the endeavors of the Hemophilia Advocates-Philippines (HAP). 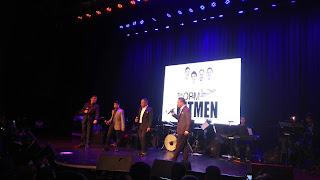 Hemophilia and bleeding disorders are group of inherited medical conditions in which the person's blood does not clot normally. According to the World Federation of Hemophilia (WFH), about one in a thousand people are born with a bleeding disorder.

In the Philippines, there are about 10,000 Filipinos with hemophilia and about a million others with von Willebrand's disease, and other bleeding disorders. When you're injured, your blood normally begins clotting to prevent blood loss, through a process known as coagulation. In people with hemophilia or bleeding disorders, the blood lacks the ability to clot properly, which can result in prolonged bleeding.


There are 13 types of clotting factors, and these work with platelets to help the blood coagulate. Platelets are small blood cells that form in your bone marrow. People with hemophilia can experience spontaneous bleeds, with no known cause. They also experience internal bleeding and often have painful, swollen joints due to bleeding.

While hemophilia predominantly occurs in males, it can also affect females and they experience more complications resulting from monthly periods. "We are a national organization composed of persons with hemophilia/bleeding disorders duly registered with the Philippine Securities and Exchange Commission as a non-stock, non-profit organization. 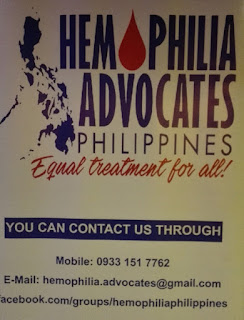 Symptoms of hemophilia include nosebleeds, bruising (especially a large, lumpy bruise), bleeding for no known reason, blood in the urine or stool, bleeding that does not stop after getting a cut/incision, having a tooth extracted, having an injury to the mouth, or having surgery; bleeding that does not stop after circumcision, bleeding into a joint that can cause tightness, swelling, and pain, as well as heavy or prolonged menstruation.

For more information on other HAP programs and activities, simply call their landline no. 02-82984737 or visit their office at Room 313, Anita Building, Quezon Avenue corner Timog Avenue in Quezon City. You may also want to check out their Web site, www.hemophilia.ph.

For support/donations, kindly deposit to the Hemophilia Advocates-Philippines through BDO Current Account No. 001348027123.