A gastronomic experience satiated dinners in Metro Manila, as well as in the cities of Cebu and Davao, when over sixty restaurants participated in the  recently-concluded 'Australian Grassfed Beef on the Menu's (AGBM) trade promotion. 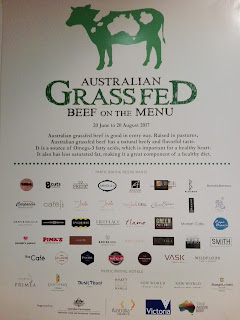 Food trail Nos. 4 and 7 brought us around noted foodstops in Makati City.

Carpaccio Ristorante Italiano's Milanese chef Maurizio Gibillini's take on the Tartare alla Piemontese was culled from Piamonte of northern Italy which doused raw beef with olive oil, vinegar, garlic, and a little parsley. His grilled main courses of rib eye, striploin, and tenderloin steaks paired well with the red wine he served. "Normally, in Italy, food is served simply with no bottled sauces. Italian cuisine is not what's on the menu but the chef wearing the toque and the ingredients used in preparing the dishes; like truffles on top of a pasta dish or perhaps scampi, not shrimps!"

His Casio pepe pasta dish had the right dashes of Picorini chesse. And the Penne tonno side dish was simply divine.

The first AGBM experience was, initially, offered to Manila diners only in 2015; but this year, it has been expanded to include foodstops outside of the NCR. Australian ambassador to the Philippines, Her Excellency Amanda Gorely, had invited diners to experience the different ways Aussie Grassfed Beef is prepared in customized menus by the participating restaurants: from steaks to meat pies and burgers, as well as pasta dishes served in a la carte and buffet menus.

Australia is the leading source of grassfed beef, as 97 per cent of its cattle are grassfed. Aussie grassfed beef is considered the healthiest beef meat as it is naturally low in fat and cholesterol, while offering a high level of Omega-3 fatty acids known to lower blood pressure and reduce the risk of certain cancers.

The other establishments we visited, that were part of the trails, were Chef Jessie Rockwell Club, Discovery Primea Flame, Smith and Butcher Grill Room, and Dusit Thani's The Pantry.