Turning hurts of the past into empowering music
By Earl D.C. Bracamonte

Louis Xavier was a 220-pound teenager who was called fat and ugly repeatedly; the reason why he almost quit school because of the bullying he received from both classmates and teachers. It took two long years to shed off the unwanted weight and slowly gain confidence in himself again. Today, the model-singer has beautifully sculpted his 5'8" frame with a lighter weight of 145 pounds! 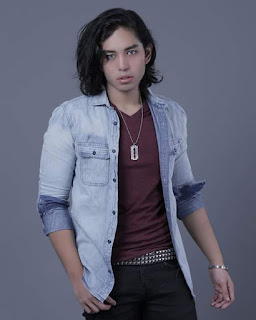 "There was a time I became bulimic and anorexic because I was desperate to lose weight.  From my rotund frame, I got a 24" waistline. I went to the gym even when I fasted," shared the 22-year-old who confessed to being enamored with the Goth style since he was a kid and digs out the films of Tim Burton and the Transylvania folklore.
Christened Gio Aragon, the budding singer-songwriter picked Louis Xavier as his screen name because he loved France's King Louis XV's fave dessert that was named after the monarch. Thus his monicker: Louis after the French King, and XaVier from the Roman numeral attached to the king's name.

Gio has a sweet tooth and could easily bake sans rival, cream puffs, or macaroons for you. After high school, he took up a 15-month chef's certificate course at the Endurun College. "This is where my musical odyssey began. There was this beautiful piano in the student's lounge that I kept tinkering on. Since I had no formal music education, I was practicing my ear to pick up the tunes. After a while, it became easier to play melodies by ear and get comfortable with the piano keys.

"When I turned 18, I finished writing a rock ballad, Sacred Wine, as a gift to myself. It was my toast to 'all of our crimes.' At the start of 2017, I wrote a pop song, Keep Holding On, as my take-off from the rock genre, and which I dedicated, initially, to the bombing victims of Syria and Marawi.

"Later on, I rewrote the song as an ode to the International Refugee Day; which the organizers gladly included in their album compilation for the event. The lyrics of the songs empowers bullied kids, then and now. It is an anthem against violence towards children in general."

As an initiative, Gio wrote the aforementioned song and arranged the same until it eventually became part of the global campaign for refugees and displaced children.
"I want to be their voice in their strife, through my songs. If I can talk to my much younger self now, I would tell him that you'll grow up to be a better person one day. No one can bully you now.

"If ever I get to visit a displaced children's camp, I would gladly sing for them and make desserts so they get to forget their strife, even for a while. I'm planning to do a fundraising concert sometime in 2018. The proceeds I plan to share with the Wish Foundation, Unicef, and some other planned charity beneficiary."

Gio is the middle child in a brood of three, with an older sister Camille (26) and a younger brother Brandon (11). He has appeared in such TVCs as Goldilocks, Nestea, Kawasaki, Globe, and Sprite.