"Forgive and Forget" could very well be the title of an '80s romantic movie. But in real life, that's the best resolve one should muster when being hurt by someone. I've seen people hold on to their hatred that it ate up their wellness and well-being. And I've seen many others who have decided to forgive those who have  wronged them and moved on to better lives. The world is truly round. And when the Almighty closes a door, He will surely open a window!

Such is the case of Marvin Fernandez, the former Duty Free cashier who got a mouthful from an irate customer after faring in an altercation regarding a credit card transaction.

"I kneeled down to Boyet Fajardo, the angry customer, to stop the ruckus because people were now flocking to my station. After that fateful incident, it was a good thing that my contract with Duty Free was ending and, luckily, found a new job thereafter. My few, remaining working days at the Duty Free counter weren't that serene because clients sought me not as a station for payment but as somebody from a YouTube video that was captured in the aforementioned incident.

"I had moved on from the Duty Free incident a long time since, and never mentioned it to my new employers. If you know you're right, just go for it. It is the people's perceptions that changes the picture. Nobody got harmed by doing what's right.

"After the first hearing, I dropped out from the case that was filed by my former employer. I realized I had it in me to forgive, it even surprised me. The next time I met Boyet, I accepted his sincere apologies. Strangely, a friendship formed. Through time, with constant communication, our friendship grew deeper," reminisced Marvin, the second child of an all-male brood.

Unfortunately, despite Marvin leaving the case, it still went on because libel is a criminal offense. And even if private parties drop from the litigation, it remains a people's case. That's why all criminal cases are labeled "People of the Philippines" versus "an offender," because it seeks to redress a wrong and set an example to future errants of the law.

The Marvin Fernandez now is a far cry from the thin counter staff when the Duty Free incident happened. He now sports a longer hair, is called by another name, Marian, and dons dresses to work. It could be said that with this new outlook in life, he has moved on from the hurts of the past.

"My current job is all about inventory control - from filling up delivery requests to pulling out of inventories from store outlets. While my former Duty Free job required me to interact with different clients, being in customer service, my new post has limited interaction with outsiders as I am mostly confined inside the showroom. Best of all, I am enjoying the camaraderie of my co-workers now; something that can't be said of my former post," enthused Marian.

When the case was finally decided in Boyet's favor, after a nine-year battle, the two friends were together celebrating. 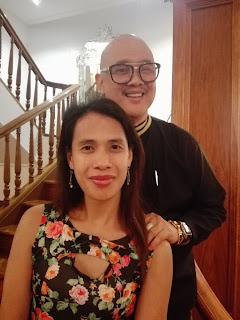 "The dismissal/acquittal had a humbling effect on me. It was an eye-opener. When I received the summons for the case, I thought it was karma; but then I realized it was part of my journey. The litigation was destined to happen to make me a better person. I asked forgiveness from Marian (Marvin's assumed name now) because I wanted to rectify my mistake.

"Hearing the gospels regularly has strengthened my faith. Now, I can control my temper, unlike before. If the same scenario (from the Duty Free brouhaha) would happen again, I would simply turn my back and not create a scene.

"God has better plans for me, and with patience, one day I'll know what he really wants me to do. Or, perhaps it is being a voice for persons with disabilities (PWDs). Invest in humility and God will bless you. Before, I was selfish and always thought of what I could get out of every deal. Unlike now, it's all for welfare. The Almighty has opened new and better horizons for me.

With the case dismissal, both Marian and Boyet have high hopes that the YouTube video of the Duty Free incident will be taken down from the site for good.
Labels: boyet fajardo case dismissal duty free friendship libel Marian Vhine Fernandez scandal