Following its Golden Year anniversary, PETA stages, once more, the iconic Filipino phenomenon Rak of Aegis for 77 new shows comprising its sixth run. Featuring songs from the popular '90s rock band Aegis, the play tells the story of Aileen, a young girl with a big voice who dreams of having her video uploaded on YouTube to become viral and be eventually discovered by the likes of Oprah and Ellen Degeneres. While Aileen's motives at first remain shallow, she later reveals that it is because she wants the world to know of her barangay's condition: submerged in floodwaters for almost three months, with their livelihood and health all slowly drifting off with the murky waters. 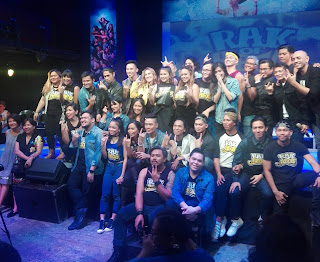 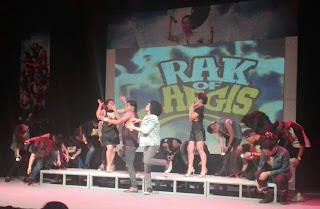 "Rak is basically a story of a community who got flooded. We've set the show in water for more teeth and content. It's the most jologs of the jologs approach to presenting a story, and it has worked. The gold mine of every production is the cast and from the beginning, it was important that we made the 'water' remain fresh.

"So to make the waters fresh this season, we went on an online search. And fresh off from the boat are nine talent search winners who are now part of the cast. We feature some Aegis songs that are not so popular. The new actors, and their interactions with the older cast members is what makes for a fresh take on this timeless material. As the Rak motto goes, nobody is left behind," intoned director Maribel Legarda. 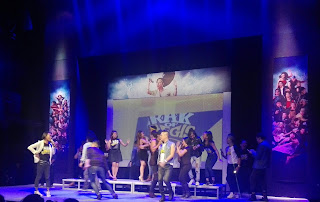 The number of people involved in Rak have expanded through the years, evolving into a large community of artists that now consider themselves family. "Rak has been running for such a long time that Brgy. Venezia has become a real expanding barangay. In the beginning, there were just 14 people and a few alternates. Now, when they all come together, there are more than 40 artists. It really is, now, a community that keeps on growing," declared Legarda. 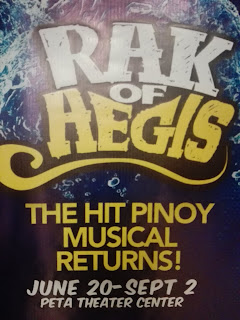 The musical runs from June 20 until September 2 at the PETA Theater Center, with shows on Wednesdays to Fridays (8 pm) and Saturdays to Sundays (3 pm and 8 pm). For inquiries and ticket reservations, simply get in touch with PETA's marketing and public relations office through tel. no. 725-6244 or TicketWorld via www.ticketworld.com.ph or 891-9999.
Labels: aegis Hu Got Talent musical PETA rak of aegis Rakstar rock search sixth season