Catriona Magnayon Gray bested 93 other hopefuls at the close of the Miss Universe coronation rites held at the Impact Arena Muang Thong Thani in Bangkok, Thailand. A shoo-in since winning the Binibining Pilipinas early this year, the 24-year-old model-singer has consistently stayed on top of the prediction charts; including an impressive showing at the contest's preliminaries, and most especially in the final Q and A.

When asked by host Steve Harvey, "What is the most important lesson you've learned in your life and how would you apply it to your time as Miss Universe?", Catriona quickly responded by saying, "I work a lot in the slums of Tondo, Manila and the life there is very . . . It's poor and it's very sad. I've always taught myself to look for the beauty in it; to look for the beauty in the faces of children and be grateful.

"I would bring this aspect as a Miss Universe to see situations with a silver lining and to assess where I could give something - where I could provide something - as a spokesperson. If I could also teach people to be grateful, we could have an amazing world where negativity could not grow and foster; and children would have a smile on their faces." 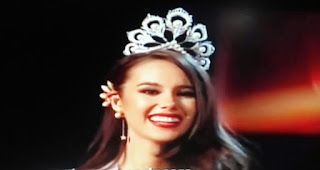 Gray's court is comprised of Tamaryn Green (South Africa) and Stefany Gutierrez (Venezuela) as first runner-up and second runner-up respectively. Laos, on the other hand, won the Best National Costume.

A tender moment took place, after the announcement of the Top 20 semi-finalists, when the Miss Universe Organization gave due recognition to Spain's delegate, Angela Ponce, as the first transgender woman to have competed in the pageant. 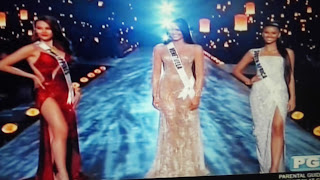 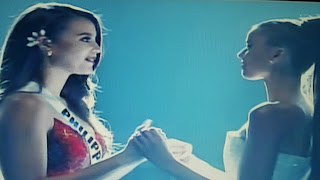 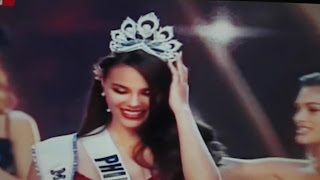 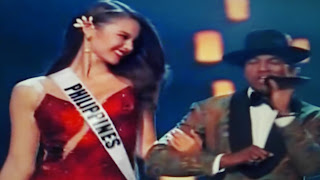