Jamming with The Company
By Earl D.C. Bracamonte

With their concert, simply dubbed "Throwback," scheduled on the first day of December at The Theater in Solaire, The Company sang "Love is Love is Love" early on in the show to spread some Yuletide cheer. 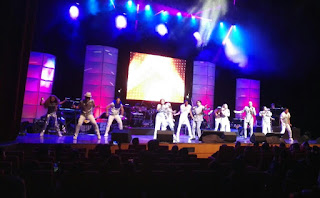 The quintet, comprised of Sweet Plantado-Tiongson, Moy Ortiz, Annie Quintos, OJ Mariano, and Cecille Bautista, tossed us back to the yesteryears, albeit not chronologically, with the songs that have touched the hearts of many for the last six decades. What gave away a particular era, aside from the songs, were the fabulously concocted costumes executed by designers Ivarluski Aseron, Francis Libiran, and Maxi Cinco. 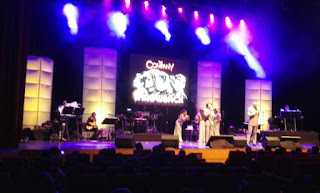 The group opened the show with current hits by splicing Jess Glynne's "Hold my Hand" with Justin Timberlake's "Can't Stop the Feeling" while gyrating to the fast beat with the Whiplash Dance Co.

They went on singing to a bevy of tunes that gave an overview to the passing of time. They began with the Gregorian chant "Salve Regina" and was followed through with a string of hits that included Paul Robeson's "Old Man River," Johnny Cash's "I Will Walk the Line," Ritchie Valens' "La Bamba," Ben King's "Stand by Me," The Beatles' "Hold Your Hand," Aretha Franklin's "Respect," Jackson 5's "ABC," Queen's "Bohemian Rhapsody," Kool and the Gang's "Celebration," Michael Jackson's "Thriller," MC Hammer's "Can't Touch This," Destiny Child's "Say My Name," Backstreet Boys' "I Want it That Way," Katy Perry's "I Kissed A Girl," Black Eyed Peas' "I Gotta Feeling," Justin Bieber's "Baby," Psy's "Gangnam Style," Miley Cyrus' "Wrecking Ball," and Disney's "Let It Go" from 'Frozen.'

Evoking the spirit of the '90s, The Company donned on some Versace prints while doing a mash-up of Lady Gaga's "Paparazzi" and Madonna's "Vogue" before bringing the sound to the new millennium with a medley of Corrs' hits like "Breathless," "Radio," and "So Young."

Halfway through the show, the group sang their hit songs to an appreciative audience; who were singing along to "Pakisabi Na Lang," "Now That I Found You," "Muntik Na Kitang Minahal," and "Everlasting Love." 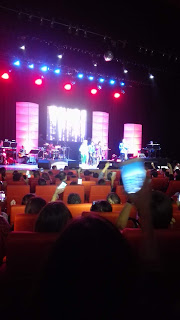 The nostalgia continued with the '60s and a string of Beatles music - "Let It Be," "Come Together," "We Can Work it Out," "Baby You Can Drive My Car," "Twist and Shout," "I Saw You Standing There," and "Get Back." The group also brought the passion of the 'Flower Power' era with ditties like Dusty Springfield's "The Look of Love" and a homage to colored artists with such hits as Stevie Wonder's "Signed, Sealed, Delivered," Martha and the Vandellas' "Dancing in the Streets," and Sly and the Family Stone's " Dance to the Music." 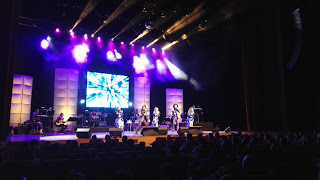 In between the decade music presentation, comedian Jon Santos regaled the crowd with an amusing soliloquy, first as Cher, and afterwards as Diana Ross.

The dance party ensued with the '80s disco vibe. The quintet did a mash-up of the Pointer Sisters' "Jump" with Jessie J.'s "Bang Bang," which she collaborated with Arianna Grande and Nicki Minaj. The beat continued with Philip Oakey and Giorgio Moroder's "Electric Dreams," Eurythmics' "Sweet Dreams," and Robin Gibbs' "Boys Do Fall in Love." Then turned things mellow with a duet from Kylie Minogue and Jason Donovan, "Especially for You." 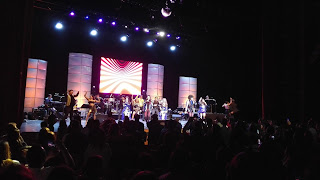 The group saved the best for last with the decade they most harkened to - the 70s. Prior to doing a medley of hits from bands and singing groups, they paid homage to the era's diva - Diana Ross - by belting out two of her upbeat songs "I'm Coming Out" and " Upside Down."

Memories flooded back with such hits as Band of Gold's "Love Songs Are Back Again," The Stylistics' Let's Put it All Together" and "You Make Me Feel Brand New," Chocolate Factory's "Becha By Golly Wow," Blue Magic's "Sideshow," Peaches and Herbs' "Reunited," and The Artistics' "I'm Gonna Miss You." 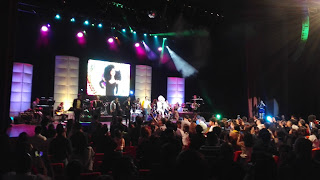 The group signaled the evening's close with a splice of Vance Joy's "We're Going Home" and Donna Summer's "Last Dance" before doing an Earth, Wind and Fire medley of "Sing a Song," "September," and "Boogie Wonderland."

During the encore, Jon Santos discarded the wigs and costumes and jammed with The Company as they all sang a mash-up of The Trammps' "Disco Inferno," The Advisors' "Yugyugan Na," and Madonna's "Music" -with the crowd, and the Whiplash Dance Co., joining in the dance frenzy.

Directed by Floy Quintos, with musical direction from Beth Martin, "Throwback" was aptly described by Moy Ortiz when he said that, "Looking back is the best way to move forward . . ."