Through the creative campaign "Acting on HIV," The Philippine Educational Theater Association (PETA), the Red Whistle, and Love Yourself joined forces for a massive HIV advocacy to increase awareness and curb stigma. 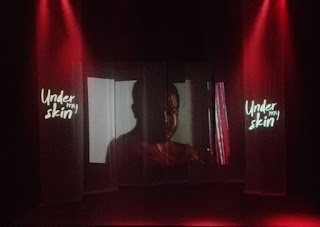 Love Yourself Inc. started with six guys in 2011 with support from GlobalFund. Today, 14 clinics give framework as community-based organizations. They are also into Mental Health ventures and TransHealth Clinic programs. Their recent nationwide testing, KYS (Know Your Status) and Play, decreased to 5% from a high of 12-15%. "There's more to be done. Collectively, each one of us has his/her contribution to this initiative," said president Benedict Bernabe. 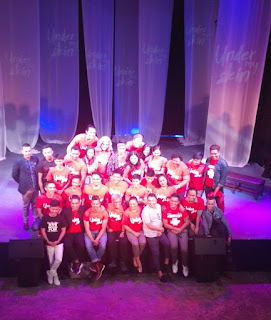 "If you want to change people's minds, you first have to change people's hearts. Behavioral change is through the heart and not the mind. We need plurality of voices, as well as different types of messages and messengers," opined president Benedict Bernardo.

Now on its 12th Year, the head shots may be seen on various social media platforms through the hashtag #HSCUnderMySkin and on Project Headshots Clinic's media platforms @headshotclinic on Facebook and Instagram.

"Acting on HIV is an integrated set of activities with the play "Under My Skin" as core project under the campaign. We've tackled the HIV crisis before in the Mekong Project with Thailand, Cambodia, Myanmar, and Vietnam. However, the rise is alarming. As of June 2019, there are 35 diagnosed cases per day and half of these come from the 25-34 age bracket, and an equally sizable number from the 15-24 age bracket.

"PETA is hopeful the play corrects misconceptions. Together with our other partners (Unilab, Phinma, UNAIDS), let's fight the apathy and end the stigma," intimated executive director Beng Cabangon, during an intimate media luncheon the day after World AIDS Day in early December 2019. 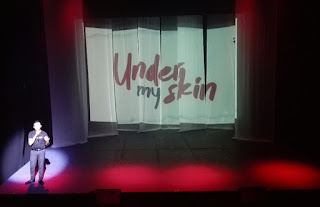 UNAIDS reports cite the Philippines as the No. 1 country with the fastest growing HIV epidemic in the world, with an estimate of 70,000 cases by the end of 2018 alone. According to the HIV/AIDS & Art Registry of the Philippines under the Department of Health, there are 35 newly diagnosed cases of HIV everyday as of June 2019. It's an alarming spike from the data of 2008 that reported only one case per day, and the ages affected are now becoming even younger. To combat this global epidemic, UNAIDS established 90-90-90: a new target for HIV treatment by 2020 wherein 90% of people living with HIV will know their status; 90% of all people with diagnosed HIV infection will receive sustained antiretroviral therapy; and 90% of all people receiving antiretroviral therapy will have viral suppression.

"We are the fastest growing country in the world. Thus, "Communication Make the Difference" as our theme is very relevant. CSOs role is essential in all HIV campaigns and an integral part of government implementation.

"World AIDS Day highlights the contribution of communities towards all our efforts, most especially those coming from the network of people living with AIDS. The AIDS Law in the Philippines is a multi-sectoral approach and the government still needs the mechanism to support the CSOs.

"The good thing is that pre-exposure prophylaxis is now available for negative persons with risky sexual behaviors. We are also embarking on a comprehensive sex education program for those within the 15-24 age group because they are the sector at risk. Add to that is the U=U campaign. When all act together, it's when we can stop HIV from spreading," declared Dr. Louie Ocampo of UNAIDS. 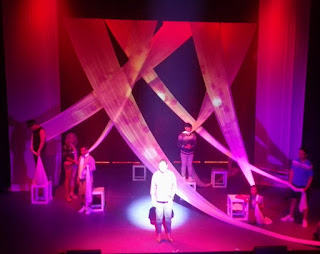 Under My Skin, written by Rody Vera, is an anthology from a compilation of true stories about Filipinos living with HIV that were gathered from their friends and relatives, HIV advocates, existing studies on HIV, doctors, and health practitioners.

Directed by Melvin Lee, the story revolves around Dr. Gemma Almonte (Cherry Pie Picache, alternating with Roselyn Perez), an epidemiologist at the Department of Health studying the spread of HIV in the Philippines who re-worded the existence of 'gay' people into 'men who have sex with men' as the local government had been subtly denying the existence of their sexuality.

Her research had shown that there was a 90% spike in the number of HIV cases among men who had sex with men, along with a steady rise of mother-to-child transmissions.

"The spectrum of age and gender affected by HIV demystifies preconceived notions. The play is used as platform for sex/sexuality, HIV, as well as issues considered taboo to be talked about. We've approached LGUs and schools to spread the awareness. The play is pegged at PG-16," enthused play director Melvin Lee.

The rate of HIV-related cases is progressively increasing in the Philippines - abetted by the stigma, lack of resources, prevailing misconceptions, ignorance from several government and religious institutions, and the absence of an effective strategy.

In the play, Dr. Gemma's prediction of the future is bleak and her only hope is a change in public perception, an increase in compassion, and a society, afflicted not with ignorance and prejudice but, filled with compassion and understanding.

"We will conduct talkbacks after every show because any campaign begins with awareness and education. PETA also used social media to further this campaign. Fear happens when we don't know what's happening," intoned artistic director Maribel Legarda.

For show buying inquiries, simply get in touch with tel. no. 8725-6244 or via petatheater@gmail.com, and for tickets at TicketWorld at www.ticketworld.com.ph and 8891-9999. Under My Skin, which closes PETA' s 52nd Theater Season, will run from Feb. 7 to March 22 with shows on Fridays (8pm) and Saturdays/Sundays (3pm and 8pm).