Art Mecca of the Philippines
By Earl D.C. Bracamonte, J.D.

Situated between the northern tip of scenic Laguna de Bay and the undulating foothills of Rizal's province is the lovely town of Angono. It is known, more, as a locale with a unique cultural life and history; with its citizens having achieved much in the fields of visual arts (painting and sculpture), music, and native artistic pursuits. 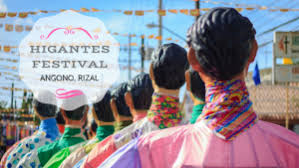 Angono's joyous fiesta celebration, in honor of St. Clement, whose image is resplendent in papal vestments, is celebrated annually from Nov. 21 to 24, where residents from all walks of life participate with their uniquely designed costumes. The street parade culminates in a fluvial procession in Laguna de Bay, amid revelries that continue 'til the image is brought back to its sanctuary.

The annual Higantes parade, which Angono is known for, has become a street marvel. In 1988, artist Perdigon Vocalan presented the tradition to the Dept. of Tourism (DoT) for it to become an annual event. As a result, the Angono educational tours aim to increase students' awareness of the rich Filipino cultural heritage in Angono through educational travel. Tourism, which incorporates learning about many aspects of the environment, is one of its campaigns. Thus,learning tours to numerous destinations and/or festivals throughout Angono are organized all year round.

Tour packages are also designed to supplement academic requirements in the different fields of geography, geology, archeology, anthropology, cultural sociology, botany, zoology, history, and pre-history. Comprehensive literature and learning materials related to many aspects of the several destinations are provided to participants.

Included in the itinerary is a visit to the Angono Forest Park, a 1.5-hectare of land nestled near the foot of the Nieves Hills Lakeview Subdivision, situated just a few blocks from the Loyola Retreat House. Profuse with high-rising trees and shrubs, the place is the perfect setting for camping and outdoor recreational activities.

The botanical garden also rents out native huts and picnic grooves to visitors. Cages around the wooded areas hold various bird and fowl species like owls, eagles, falcons, herons, and a few queer-looking kinds yet to be identified. We dropped by before dusk when the birds were fed and watched delightfully how most of them regurgitated an entire large fish in a single swallow! 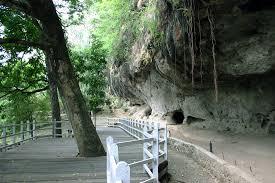 Another remarkable feature of the town's landscape is the enduring Petroglyphs, considered by many as the most fascinating part of the educational tour. Discovered by National Artist and Angono-born and raised acclaimed muralist Carlos 'Botong' Francisco in 1965, this cultural heritage site dates back to circa 3000 B.C. and is the most ancient Filipino, or more aptly, prehistoric Filipino work of art.

The site is famous for its rock engravings of 127 drawings depicting human and animal life. Previous archaeological finds yielded fragments of earthenware, obsidian flakes, and shells. The Petroglyphs site has been included in the World Inventory of Rock Art under the auspices of UNESCO, ICCROM, and ICOMOS. It has been declared as a National Cultural Treasure by virtue of P.D. 260. 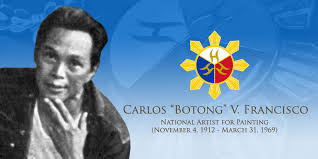 In 1996, the Petroglyphs received its greatest recognition when it was named as one of the 100 most endangered sites in the world under the World Monuments watchlist. The preservation and development of the Petroglyphs is a joint effort among the National Museum of the Philippines, American Express International, the Department of Tourism, and the Antipolo Properties, Inc.

After all the trekking, food sampling is usually the next activity. Part of our tour stopover was the famous Balaw-Balaw restaurant and art gallery, owned by the late Perdigon Vocalan. Aside from serving delectable delicacies, the resto-cum-showroom featured exquisite paintings of bucolic landscapes, figures of myth and folklore, images of religion and faith, and nude women in a number of poses.

The word 'balaw-balaw' refered to the resto's home-made pinkish-red sauce that's concocted from fermented gruel and small shrimps. Don't you mind the smell though. The mixture before fermentation is colored with angkok, an herb that gives off a reddish coloring akin to that of the achuete seed. One of the resto's mouthwatering fare, the minaluto, is a  rice dish topped with pork adobo with heap servings of itlog na pula, tabong, fried chicken meat, steamed okra and eggplant, squid, shrimps and crabs, kangkong, and fried kanduli lining the dish's sides. The kanduli is an endemic fish specie that thrives only in the Laguna de Bay waters.

Also, within the premises of the restaurant is the Ang Nuno Artists Foundation Gallery, a vast showcase of paintings, sculptures, and other art forms conceptualized and made by independent and budding artists from Angono.