A Jazz Club Opens in the City
By Earl D.C. Bracamonte


A burgeoning nightly entertainment has opened its doors to lovers of jazz, Broadway and the blues at the heart of Quezon City's pulsating Timog nightstrip. Christened Ten02 by manager-proprietress Skarlet Brown, vocalist of defunct rock band Pu3ska, the newly-opened nightspot has brought back the days of the big band. On Wednesday nights, the bar is transformed into a cabaret with a Broadway repertoire complemented by two back-up dancers in showgirl get-ups.
Sharing the stage with Skarlet on Broadway nights is Filipino-Aussie stage actor Marcus Rivera, who alternated with Leo Valdez as the Engineer in the Australian production of Miss Saigon. “In an intimate crowd, you create focus by telling a story with the songs you sing.; selling it to the crowd. And it is very important that you interact with the audience, so you'd know if your spiels and repertoire is working” said Marcus, adding that his musical inspirations are drawn from compositions written by Rodgers & Hammerstein, Ira Gershwin and Cole Porter. He dreams of playing the role of Che Guevarra in an Evita production someday.
“Original Pinoy smooth jazz music is a rare treat but we have it here Friday nights, featuring Kiss The Bride ensemble. They're Tony Razon, Vince Lahorra, Joey Puyat, Uli Avante, Otep Concepcion and Kingsley delos Santos. So I urge Pinoy jazz lovers and those who go for club bands to support our very own,” invited Skarlet.
On some nights, Mel Villena plays with the AMP Big Band and on others it's Richie Quirino's jazz group 3YO. Band leader Mel has been reacquainted with other jazz artists as Joey Quirino, Mike Alba, Simon Tan, Mike Guevarra and Tots Tolentino, who hold saxophone classes once every fortnight at Ten02 from 4 in the afternoon 'til 7 in the evening. Thereafter Mel takes over with his musical arranging workshop.
The ambidextrous Skarlet has proven that she doesn't only shine in front of the stage but also in operations, proving to be a jack-of-all-trades sort of handyman: as cook between sets; receptionist who seats guests on full nights; and as sound technician to the requirements of deft musical director Prof. Jun Cadiz, whenever the sound system experiences technical glitches.
“A P150 weekday charge or P250 weekend fee includes a bottle of beer of your choice. It took me some time to sing intimately, just from within, as against singing to a big crowd like what I did during my Pu3ska days. Now, I'm more scared of not justifying what I do than not being accepted for my shift in musical genre. Here, we belt out the soundtrack of your life: songs that I really like. Music is brought down to its most basic; as a form of self-expression where its real purpose is healing,” intoned the gifted vocalist.
Skarlet passed the Miss Saigon auditions held here before and was even informed she already got the part as one of the chorus girls. However, love beckoned. Marriage followed, then child-bearing. “Though my marriage failed, the experience gave me self-maturity that I couldn't possibly earn from singing on the international stage. Although said exposure would have carved my career path differently; bolstering my exposure in relation to music and the industry as a whole,” confessed Skarlet, further revealing that her dream roles include portraying Argentina's former First Lady Evita Peron and showgirl Velma Kelly, a character from the period musical Chicago: the role that gave Catherine Zeta-Jones her Oscar statuette. Thus, Skarlet's interpretation of All That Jazz as well as Funny Honey and Mr. Cellophane from the musical's soundtrack is true to form, vocally. And so are her versions of What I Did For Love (from A Chorus Line), If I Love You (from Carousel), Somewhere (from West Side Story), Someone to Watch Over Me (from Crazy for You), I'll Give My Life For You (from Miss Saigon) and Summertime (from Porgy & Bess). Equally outstanding is her version of the immortal lullaby Ugoy ng Duyan and a soulful take of Liza Minelli's Cabaret.
Tenor Marcus Rivera perfectly blended with her in the duets Sun & Moon/Last Night of the World and the undying kundiman Minamahal Kita. The Miss Saigon alumnus also shone in his renditions of I Dreamed A Dream (from Phantom of the Opera), Broken Vow (from the TV series Meteor Garden) and New York, New York from the musical of the same title.
Skarlet finished recording her new album entitled “The Powder Room Stories,” showcasing 10 original cuts as well as cover versions of the '30s ditty One Way Ticket (To The Blues), the disco-era classic Call Me, the Pinoy hit Babae Ka, and the pop aria I'm In Love With A Dream.
Must-tries in their menu include the gourmet pizzas like their house blend that's topped with shrimp, bacon strips, onion rings, bell peppers and button mushrooms smothered with mozzarella cheese.
Ten02 is open daily from 6 in the evening 'til 3 in the morning. For inquiries, simply call tel. no. 412-7572. 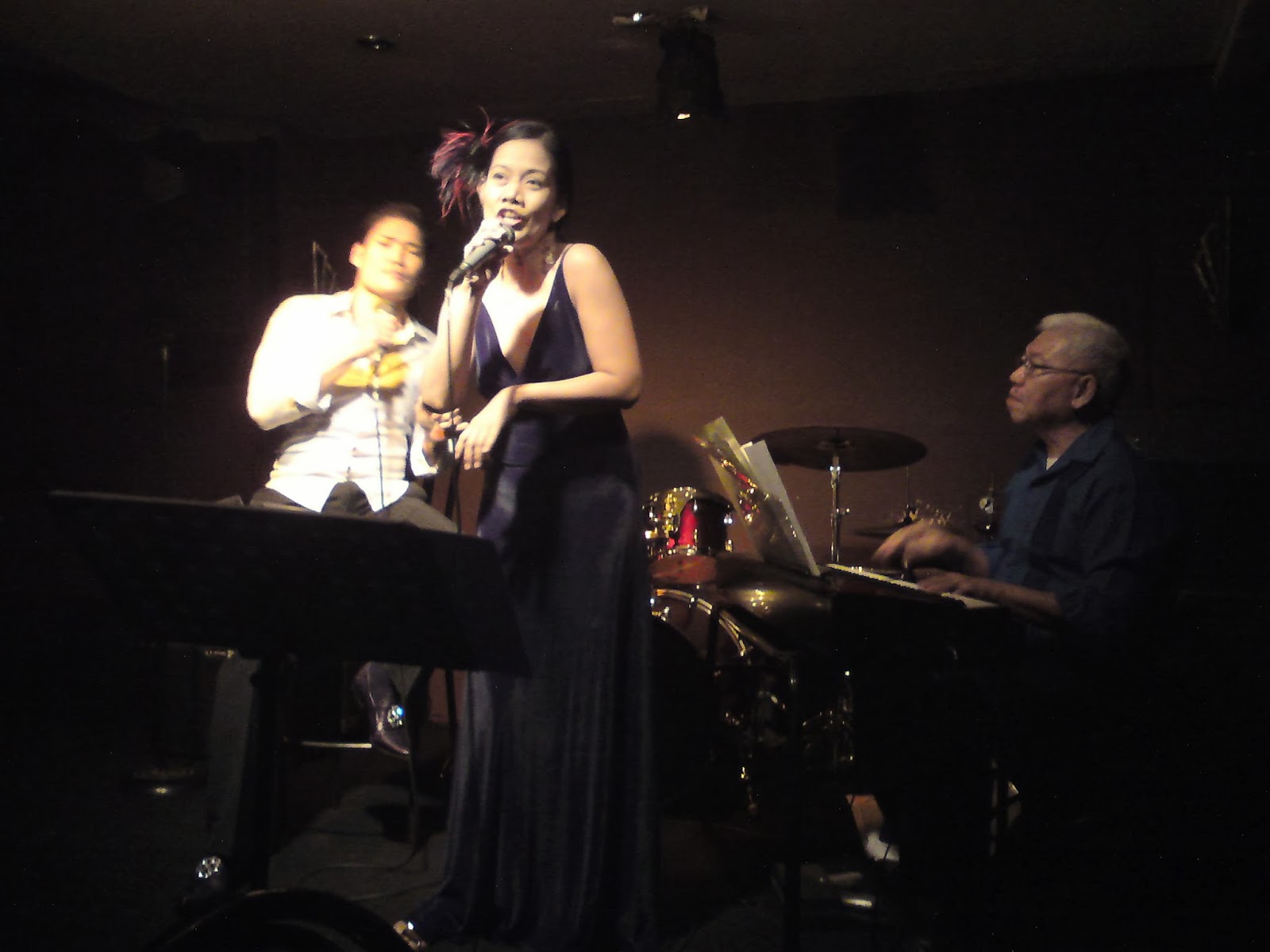