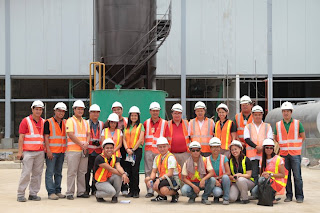 
Misamis Oriental – Coca-Cola Bottlers Phils. formally opens its 11-hectare production plant in the town of Villanueva on Tuesday, June 7th. With a maximum capacity of seven production facilities, the first two are fully operational as of presstime. Each of the working lines produces 300 softdrink bottles per minute. The rest of the production lines will be fully functional by 2013.
Situated in Brgy. Katipunan, the beverage plant is proud of its environment-friendly policies and gender-sensitivity hiring program; wherein 50 percent of its workforce are women. What is also noteworthy is that some of these positions were dominated by the menfolk in years past.
The plant has its own solid waste management facility wherein waste water is treated to become potable water again; maybe not safe enough for drinking but reusable in other water requirements as bottle or machinery washing and the watering of vegetation within its sprawling premises.
The quaint town of Villanueva started industrialization in 1975. It was once a bucolic 6th-class municipality that phenomenally rose to its present-day burgeoning 2nd-class township of 30,000 residents. The town's meteoric rise, observers noted, happened during the tenure of the Uy couple: incumbent mayor Juliet Uy and her husband, who also sat as the town's chief executive for three straight terms before her.
Coca Cola Bottlers' other plants in Mindanao are located in Davao, General Santos and Zamboanga. If Coca-Cola brought economic development to Sta. Rosa, Laguna years ago, then, by analogy, we can say that it will bring in the same economic upliftment, and more, to a thriving locale like Villanueva. These early tell-tale signs of progressive movement can be felt and seen within the community in terms of economic activity and emigration.
“This facility is way bigger than the Sta. Rosa plant in Laguna, so you can just foresee how fast it will bring prosperity to this part of Mindanao,” enthused media relations officer Wally Panganiban, during a media visit to the plant site.
You can check out the real time plant photos through http://oxblue.com/pro.
Labels: advertorial