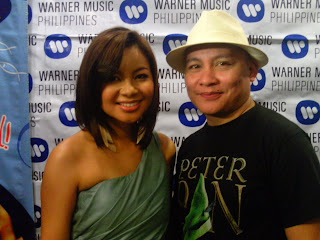 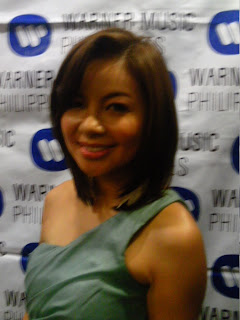 
Sitti, the country's Queen of Bossa Nova, veers away from the genre she pioneered to venture into the easy-listening musical landscape with the release of her latest self-titled album. The petite artist first broke into the local music scene essaying bossa nova tunes in 2006.
“While my preceding album, Contagious, was still bossa nova, the overall feel of it was already different from Cafe Bossa. In our live gigs right now, we don't include Bossa songs anymore. We play a lot of acid jazz, funk, and a lot of pop. Before, the entire repertoire would be Bossa. As an exception though, Para sa Akin would always be on the line-up because people still look for it. If you listen closely, there are still Bossa elemnts in the recording especially in the guitar strains.”
The first single off the album, Wag Mo Na Munang Sabihin, proved to be a revelation for Sitti. “This song is about the inevitable. It's about keeping sense of loss at bay, knowing full well it's just around the corner.”
She took her time in recording this studio album of seven original compositions, three cover versions and five collaborations; working on growing and extending her horizon as an artist. Aside from touring and performing live shows all over the country, she collaborated with other artists like Christian Bautista for his album; while also dabbling on TV and theater work as well as hosting stints.
Her acting experience from her brushes with the stage and the boobtube came in handy for the music video of the album's carrier single Wag Mo Na Munang Sabihin. “It is a very emotional song and nothing like any of the songs I've done before. After all, my leading man in the video is acclaimed actor Sid Lucero.”
The album lets listeners discover the perfect blend of easy-listening and bossa nova with the release of this compilation from Warner Music Phils.
Two of Siti's original compositions are featured therein. Baby I'm In Love was the first song she's ever written, and finally, she gets to record. “This song was written after one of our numerous gigs in Stonehouse way back in 2006. I would say that it was my former bassist Lakshi Ramirez who inspired it as it was his bass lines that kept repeating in my head that led me to writing this song.”
The other one is End It With You, a song written while flying back to the Philippines from New York all by herself in 2009. “The song just came to me. I have no idea if it was from my subconscious but definitely I wasn't thinking of ending anything.” On hindsight, it coulld be said the song was a portent to the break-up that ensued. “I'm single now and loving it. I'm still looking though and in the process of finding someone new.”
Sitti's sessions with fellow music artists feature Ako'y Sa'yo at Ika'y Akin which was written by Jon Bunda in high school and talks about teenage crush and reading comic books. Sang with jazzist Jek Manuel, this classic was made popular by Iaxe, that now bears Sitti's unmistakable mark.
She also sings Sulat with its writer Gary Granada, who wrote it 20 years ago; before there ever was text messages and Facebook. Muli is another collaboration with its songwriter Ramon 'RJ' Jacinto. It's a poignant song that speaks of hope even at the end of a love affair or marriage. “There's always that tinge of regret and at the same time a glimmer of hope that you can be back together again. This was written during the Martail Law years, a time of loneliness.”
Dream Enough, on the other hand, the song written by Kit Hain and Wayne Cohen, is made into a duet featuring crooner Richard Poon. The cuts rounding up the compilation includes To Forget You by Kit Hain as well as Emil Pama's Sana and Sino'ng Mag-aakala.
“Of all the albums I've made, this is the one that means a lot to me. I waited for so long and prayed for this to come my way. I'm very thankful everything fell into place. I couldn't be more happy. Since 2009, I've always wanted to do an album with a lot of original tracks. I hope audiophiles will join me in this new journey as I try new things and sounds at this point in my career.”
Sitti will do a round of mall shows to promote this latest recording. Catch her at any of the following venues: Greenbelt 3 (July 8, Fri 8PM), Ayala Center Cebu (July 22, Fri 6PM), Abrreeza Mall Davao (July 30, Sat 6PM) and Trinoma (Aug 7, Sun 7PM).
Labels: album artist music