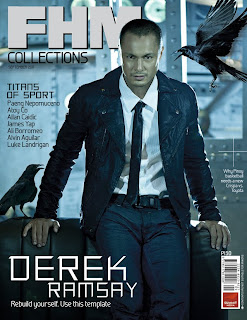 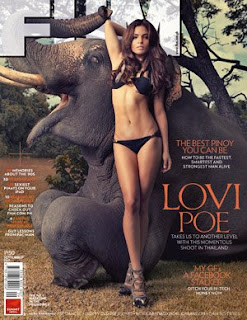 Screen siren Lovi Poe and hunk Derek Ramsey set the pages of FHM’s September issue ablaze with their fabulous photo spreads.
While many stars have made their debut on FHM, only Lovi can claim to have done so with a very special cover shot outside the country. She flew to Thailand for the magazine’s first-ever out-of-the-country cover pictorial.
“We’ve always wanted to do a photo-shoot outside of the Philippines and since the approved concept was the African-like wildlife with elephants, we decided to do it in Thailand,” shared editor-in-chief Allan Madrilejos.
Sharing the cover with Lovi is an elephant that is a star by its own, as this was the trained mammoth that appeared in the Thai martial arts movie Ongbak. “I’m very flattered to be chosen to appear on the cover. And especially like this in Thailand. The timing’s right and the shoot was with an elephant! Best relationship ever,” gushed the sultry actress.
Being the daughter of the late FPJ may put Lovi under the watchful eyes of showbiz critics, but this does not stop her from letting her true personality shine. “I try not to make this business my work so I don’t let it stop me from having fun. You can just have fun and do whatever as long as it’s clean fun. I hang out with my friends and have a few drinks, so whatever you see, is how I really am.
“FHM asked me about two-and-a-half years ago to pose for their cover but I declined. This time around, I changed my mind since they told me I can pick who I want for my creative team. The concept was good and the shoot was to be done abroad. Having enough confidence, but not too much, is what makes a person sexy. How you carry yourself makes a lot of difference too,” added Lovi.
Derek Ramsey shares stellar billing in a flip cover execution for FHM Collections. “Our main theme is about sports and the man on the cover must have both skill and style. Derek has both with being a Frisbee athlete and a showbiz personality,” said managing editor Allan Hernandez.
Despite the theme, Derek chose not to show off his well-sculpted body and instead dons a more edgy look with a black leather jacket, white polo shirt and jeans. In this special issue, he leads the pack of the country’s accomplished athletes who also embody both skill and style. Dubbed by the magazine as ‘prime specimen,’ the roster includes basketball superstars James Yap, Allan Caidic and Atoy Co; world-class bowler Paeng Nepomuceno; and Azkals team captain Aly Borromeo.
“This photo shoot shows a different side of me: fully-clothed and without a hint of flesh. This is like what I used to dress up while attending boarding school in the UK. Although, I grew up walking around without a shirt ‘coz we live in a tropical country. I’m a rugged type of guy. For men to be fashionable, all they need to have is good shoulders because with that, your clothes will look very well on your body,” advised Derek.
FHM September 2011 marks the magazine’s first out-of-the country photo shoot. You can procure a copy of the issue at newsstands, bookstores, supermarkets and convenient stores nationwide. For more of FHM online, simply visit www.FHM.com.ph and become a fan on Facebook through facebook.com/FHM.ph.
Labels: beauty fashion magazine photography