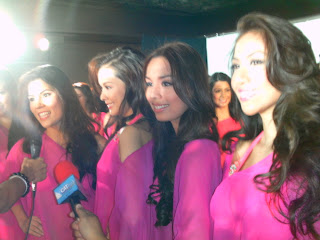 Who will be the pioneer titlist?
By Earl D.C. Bracamonte


After several out-of-town preliminaries, the Miss World Philippines is all set for its maiden pageant slated tomorrow night at the PICC Plenary Hall. Twenty five Filipinas will vie for the honor to be named the pioneer in a contest where the country still has to win in the international finals.
Miss World Philippines began its Philippine provincial search from March through July covering the cities of Naga, Cebu, Pampanga, Davao, Vigan, Zamboanga, Bacolod and Manila. Its last search was held in Los Angeles at the Miss Beauty of the Philippines pageant at the Millennium Biltmore Hotel. The July event attracted Filipinas from the Fil-Am community.
“I invited Filipino fashion designers to be part of the pageant. We have nothing against pageant repeaters. CQGQ won’t discriminate people who want to try again. The candidates can express their opinion, during the Q & A, in their own dialect; where they’re most comfortable. I would also like to thank everybody who took part in our charity fund-raiser. Thank you for sharing your heart with the less fortunate,” intoned Philippine franchise holder Cory Quirino.
Early this week, the pageant held its pre-pageant charity night at the Manila Hotel; inspired by its goal to raise millions for charity. Cory Quirino’s over a decade-long involvement with the PGH Medical Foundation and the Tuloy Street Children Foundation, as well as the Rotary Int’l 3830 chapter, in changing the cause of street children and marginalized women, has found the pageant to be the best platform from which these causes can be better addressed.
Taking inspiration from Miss World’s advocacy ‘beauty with a purpose’ and driven by its core value ‘beauty in giving,’ Miss World Philippines dedicated its charity night proceeds to champion advocacies close to the heart of Miss World. The maiden pageant intends to donate a generous amount to its aforementioned recipients so as to uplift the lives of underprivileged women and children in the country.
The Charity Gala Night included a silent auction of paintings, sculptures and various artwork donated by renowned artists like national artists Arturo Luz and Ramon Orlina; noted sculptor Daniel dela Cruz; L’arc en Ciel artists Connie Quirino, Stella Kim, Miguel Buhay, Mia Herbosa, Pilar Quiros, Ditas Dominguez, Margie Villongco, Carla Kim, Elaine Herbosa and Russian artist Gregory Prototsky.
“No matter what happens in the world, the Miss World pageant would still be relevant. It’s not a perfect world. So we must have people to help in our causes,” enthused reigning Miss World Alexandria Mills, during a short colloquy with print media.
The first Miss World, Sweden’s Kiki Haakonson, was the first and last winner to be actually crowned in a two-piece swimwear. That was 1951 and the competition was introduced as part of the Festival of Britain celebrations. It was the audience it attracted that guaranteed its success to this very day.
Thanks to founder Eric Morley’s PR expertise, the first Miss World pageant welcomed a global audience greater than international events like the World Cup and the Olympic Games. The BBC network televised the pageant from 1959 ‘til 1979 and Thames Television, thereafter, picked up the contract from 1980 to 1988. At its peak, the show claimed an audience viewership of 27.5 million in Britain alone; a figure comparable to that of a royal wedding.
Sixty years on from the first pageant, Miss World still pulls in the crowds and can boast an annual audience of over a billion globally. With Julia Morley as chairman, Miss World continues to break records. With franchises in over 120 countries and fundraising projects topping over $150 million, who knows what the rest of the 21st century will bring for Britain’s most successful international television show.
The first Miss World Philippines winner will receive a luxurious seaside condominium unit at the Sea Residences from corporate sponsor SMDC and a cash prize of P1million from CQ Global Quest.
The crown, a bejeweled set of Swarovski, simulated rubies and zirconia, elaborately designed and created by Beverly Tan, is valued at $15,000 – equivalent to over half a million pesos – is a fine piece of diadem to be worn by the first Miss World Philippines grand winner.
But as the Philippine pageant draws to a close, it also marks the beginning for the newly-crowned winner’s quest for the world title. The crown has long eluded the Philippines since 1951. Thus the beauteous adventure unravels as a challenge to all Pinoys to rally behind this aspirational goal: to win that glorious crown for the country.
At the close of the charity fundraiser, a few corporate awards were given to some lucky candidates. Nicolette Henson was named Ms. Metrodental and Samantha Purvor was chosen as Ms. Manny O. Wines. Gwendolyn Ruais was hailed Ms. Walter Bread while Erina Ann Lightholder was bestowed the honor as Ms. Shimian Clinic. The latter won P200,000 worth of services from the awarding clinic while the other winners each received P50,000 in cash.
The biggest winner for the evening, however, was Rogelie Catacutan who was named Miss Friendship as well as being proclaimed Miss Freego (Best in Talent). Her medley of ribbon dance and zip got the judges nod and a cash prize of P100,000, aside from the P50,000 she won for the amity award.
The closest the country ever got at winning the elusive title was in 1971 when Evangeline Pascual won 1st Runner-up; and then again in 1993 when Sharmaine Ruffa Gutirrez was named 2nd Princess at the glitzy rites held in Sun City, South Africa.
For more information, simply get in touch with the MWP secretariat through tel. no. 780-4789 extension 7171 and mobile # 0910-2382461 or visit their official Web site www.missworldphilippines.com. The coronation rites will be beamed live to a nationwide audience through the GMA Kapuso network.
Labels: beauty Filipina pageants