Garth Garcia is all set to release his self-titled debut album with Subukan Natin Muli as carrier single; a romantic ballad that talks about second chances and a love that is sweeter the second time around. The artist collaborated with Gino Aldeguer on the music and lyrics, and who also shot the music video in the picturesque island of Mindoro.
“II don’t change the modulation of my voice to make it more distinct. I want to bring back the pop meter of the ‘80s where most OPM classics were born,” enthused the talent search veteran.
Prior to being casted in the GMA-7 TV series Munting Heredera, Garth Garcia already made the rounds of several talent searches, including Star in A Million (Season 2, 2007) and Pilipinas Got Talent (Season 1, 2010). Last March, his song, Masaya na Akong Iniwan Mo, was a feature song in the hit drama series Two Wives that enjoyed 24 long weeks on the top ten countdown charts.
“I wrote this song for the Himig Handog songwriting competition. Unfortunately, it did not reach the Top 12 for the finals. Still it became a hit as many listeners related to the song. It remained on the MOR Top Ten for 24 straight weeks, staying in the countdown from random listeners’ requests,” shared Garth during the album launch at The Crowd Bar in Madison Square.
A songwriter, first and foremost, Garth’s first collaboration with rapper Blanktape for You’re The One was an instant hit, landing at the Biga10 of MOR 101.9’s weekly countdown, ranking fourth for eight consecutive weeks. So it came as no surprise when he was awarded as Best New Artist at the ABS-CBN MOR Pinoy Music Awards of 2014, beating more popular artists like Enrique Gil, Richard Yap, Ron Henley and G2B Boys.
“I finished my Management degree after Star in a Million. I then forayed shortly with a boy band called Romboys, comprised of Thirdy Casas from Pinoy Pop Superstar, Dan Lina, Carl Williams and Ron,” he added.
His success was cemented with his second single, Ikaw Ang Mahal, which he wrote and composed. It, too, landed in MOR Exclusives’ Biga10 for twelve consecutive weeks, as well as on the top ten in several other radio stations.
“Most of the songs I write are culled from experience. I also wrote a song for Morisette. It’s a belt out song with high notes more suited for a female voice. I look up to ‘80s artists like Raymond Lauchengco, Marco Sison and Keno as well as contemporary artists JR and Erik Santos,” he continued.
The cuts in his self-titled debut album are Wag Kang OA (featuring vocals of Nicole Parada), Write A Song, Dagat Ka, Lupa Ako (featuring Aikee), Subukan Nating Muli, Magulong Pag-ibig, Masaya na Akong Iniwan Mo (theme song from Two Wives), Ikaw ang Mahal (featuring ‘Lil Twista), Di Inaasahan (with Laarni Lozada) as well as the minus-one of the three latter songs as bonus tracks.
“Di Inaasahan made it as #18 in MYX’s Top 20 countdown. Laarni and I are co-performers in The Crowd Bar twice monthly. It usually falls on Saturdays when we do special shows. One of the cuts in the album, Dagat Ka Lupa Ako was inspired by the popular telenovela Dyesebel. It debuted on Pinas Pride’s Top 10, enjoying heavy airplays on both MYX and MTV Pinoy channels,” he said at the close of the intimate colloquy.


Garth’s self-titled debut album will be out in all record bars on June 20th. 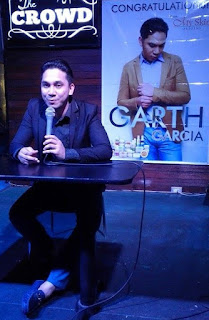 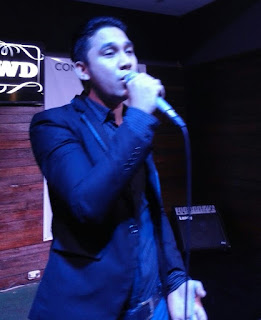 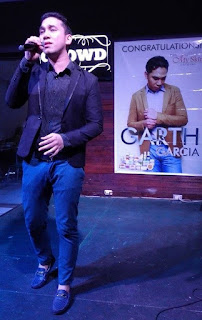