The Theater in Alternative Platform (TAP) celebrates its paper anniversary today with a one-night only performance at the PETA Center, featuring a special show of its most successful production, the Ampalaya Monologues.

“TAP brings theater to where people are, like in bars and bookstores. But we also want to perform in an actual stage. So this time around, we are performing in a real venue,” shared artistic director Mark Ghosn. 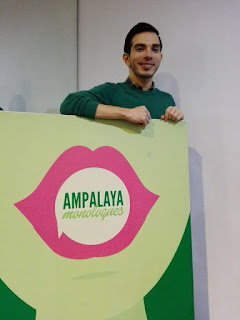 Written by Ghosn, Ampalaya Monologues is an episodic play that features a collection of short soliloquies about love, heartaches, and bitterness. Inspired by Eve Ensler’s Vagina Monologues, the show tells the stories of diverse individuals who’ve tasted the different flavors of bitterness that love has to offer – Hanash ng Soloista, Sa Pagitan ng Tayo Ba at Hindi Na, Panata ng Pusong Bagong Laya, and many more.

Each character’s story on every monologue varies. There’s the bitter queen who got dumped for her own best friend; the boy next door who’s trying to get out of the friend zone; the single lady who is forever a third wheel; the NBSB and her almost-lover; the LDR couple; the womanizer who got cheated on; the guy experiencing his first moving-on moment; and a lot more. No matter what your heart’s tale is, there’s an Ampalaya Monologue ready to pull its string. 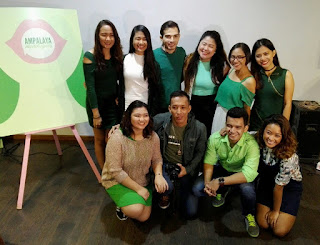 “The theater’s core group all came from Dulaang Perpetual of the University of Perpetual Help. Themes vary for each of our shows like domestic violence, or LGBTQ issues during Pride Month, as well as those where we incorporate live music or dance,” he added.

The playwright confessed he has not been in an official relationship his whole life. But he has known a lot of people who have been in and out of so many relationships that he is, in a way, thankful for it. He is the shoulder to cry on, the go-to person for love quotes and advice, the kind of friend who will listen as you go heal your broken heart. And so one day, he decided to sit in front of a computer and turned the bitter stories into art in a form of soliloquy, and thus, Ampalaya Monologues was born.

“There will be 20 actors in tonight’s show, including best-spoken-word performances.  Our 2nd season will delve on Ampalaya Dialogues. So you get to hear the other side of the story. After all of the bitterness, there is always something positive.

“Our undertakings are inspired by the Sipat Lawin Ensemble. Sixty per cent of our viewers belong to the 18 to 24 age group, the millennials. We will be launching a book soon. It will be a compilation of the monologues,” enthused Mark.

The one-night only show will also feature a performance from 70-year-old thespian Elizabeth Concepcion who will essay Inukit sa mga Tala. 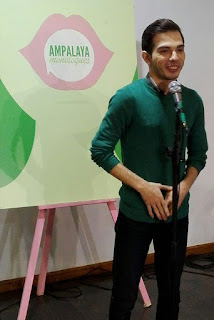