Back-to-back victory parties were held at The Arena, in San Juan last Sunday, and at the San Miguel Corporation headquarters in Mandaluyong City last Monday to honor the thousands of faithful ‘kabarangay’ who stuck with the Gin Kings throughout the title drought. The team last won a championship in 2008.

"I joined the GinMen as coach last year. We are developing a culture of supporting each other. It took a while though, as the team was a bit disjoined at first. Now, the team;s right-minded and headed to the same direction," apprized coach Tim Cone.

Close to 4,000 fans trooped to The Arena to see their favorite Barangay Ginebra San Miguel players, while employees and supporters flocked to the SMC headquarters to also show their gratitude to the team. In both events, the Gin Kings took time to sign autographs and pose for selfies with the fans.

"Before, the team had more defense than offense. Team is now at the forefront and there's no limelight on lone players. We'll continue to complete our winning streak. We have new guys who can get better and who understand the system," coach Tim continued.

"Handling fans expectations was the challenge in this conference. Players just get hungry for affirmation. Their worst games were with big crowds of fans. But that's rectified now. Basketball is a long journey with ups and downs.

"This is a storybook finals. In Game 4, JayJay Helterbrand and Mark Caguioa turned it all around. In my 27 years of coaching, I have the the best coaching staff with Ginebra San Miguel," said coach Tim, at the close of our colloquy. 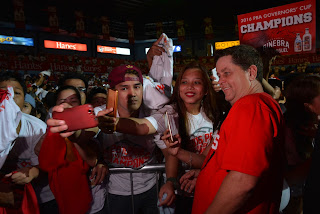