After greeting its foundation day with ritualistic rites at the Fort Santiago, the Philippine Educational Theater Association (PETA) continued its celebration with a two-day musical show. Simply dubbed "Singkuwenta," the 50th anniversary concert was written by Anj Heruela and directed by Melvin Lee, with musical direction by Jeff Hernandez and Myke Salomon. 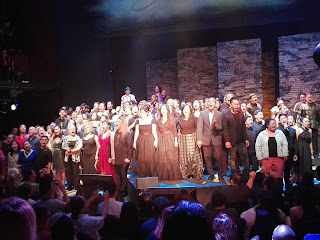 
The concert celebrated the theater's rich history through songs. It also served as a thank you gift to its partners who not only supported PETA through the decades but also shared its vision for the nation and for Philippine theater.


"PETA could not have gone this far if not for the unwavering, and unceasing engagement of our members, staff, alumni, partners from the government, program partners in the schools and LGUs, the embassies, people's organizations, art & cultural institutions, business entities, the media, academe, the religious sector, and our partner communities here and abroad," thanked president CB Garrucho in her keynote speech.


Madame Garrucho also offered Singkuwenta to the public, to whom its vision is dedicated to. "We dedicate Singkuwenta to the Filipino.people, whose history and culture are far too rich and meaningful to forget; and whose stories of bravery, resilience, strength,
compassion, and capacity for sacrifice are far too inspiring to be left untold. These are the people who are all part of the stories we tell. Then, now, and until the next fifty years."
The three-hour extravaganza was narrated by Soxie Topacio, Mae Paner, Dessa Quesada-Palm, Cris Gonzales, Meann Espinosa, and Joel Lamangan.


For more information regarding PETA's 50th theater season, simply get in touch via petatheater@gmail.com, visit their Web site - www.petatheater.com, and/or the official Facebook page, www.fb.com/PETATHEATER. 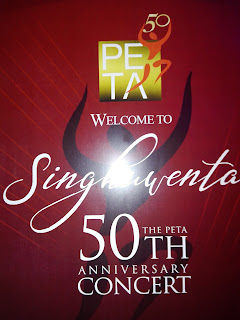