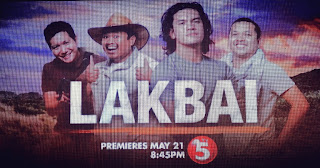 "We are presenting the Philippines in a different light, mingling with people and seeing their culture up close. It is an alternative to your usual Sunday fare," enthused head for network marketing and digital programming Lloyd Manaloto. 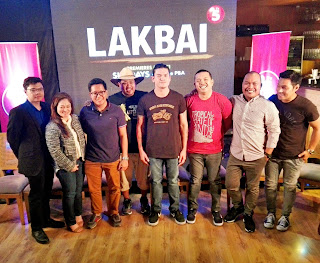 Lakbai, which is a contraction of 'Lakaw ta bai' in the Visayan language, translates to 'Alis tayo kaibigan' in Tagalog. That the show title is a homonym to the Filipino word for travel - lakbay - is very telling. It is a one-of-a-kind show that takes viewers on a tour of some of the most picturesque spots in the country.

"The show is told in a different voice and shot with a different look. We've put up something very exciting that will showcase our amazing culture, history, and the panorama of the islands," remarked TV5 president and chief executive officer Coach Chot Reyes. 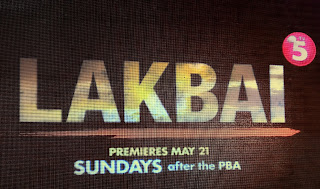 Lackbai is not just another travel program showcasing the Philippines' views and food. The 8-week special is about a group of five guy pals who'll find the best places to have a travel adventure. The show will make the tele-viewers see the archipelago in a whole new light. In every episode, the hosts will explore two locations and participate in local activities that would leave them making a connection with every featured destination.

"We will show places not often visited or not featured in other shows. These are requested sites that are truly interesting places. We have chosen to be in collaboration with the team. You'll see the other side of Baste. Very few TV shows are unscripted and have no formal format to speak of. This is one such show," revealed head for content and acquisition Mell Yazon-Tolentino.

Making his TV show debut is surfer, musician, traveler, advocate, and social media rockstar Sebastian 'Baste' Duterte. This reality adventure show will be presented in both Visayan and Tagalog dialects, with subtitles for easier comprehension. For the first time, viewers will get to discover the adventurous side of Baste and see more of his personality as he interacts with the local people they meet.

"I'm proud to be Bisaya. In our dialect 'bai' means 'friend.' It was my decision to be in this show. I want to try showbusiness but not the movies 'coz I have no talent in acting.

"In this show, I'm just being myself; walang pinag-iba (there's no difference) to how I am in real life. We will be having guests in every episode. I suggested to the network who my co-hosts will be 'coz I'm camera-shy. I'm still based in Davao and TV5 flies me to the locations for the shoot," shared Baste.

Completing the all-male quintet are three of Baste's bosom buddies: Atty. Alexis Lumban, a lawyer by profession yet a jokester at heart; Vince Jul "S'Boy" Malicay, the cool bro who keeps the mood light; and Andrei Apostol, creative guy and designated videographer; together with Bogart the Explorer, who is known for his hilarious adventures as seen in his viral videos.

"My advice to travelers is to pack light. It is easier to move from point to point that way. Lakbai is much fun than my other shows," intimated Bogart the Explorer, in his signature Aussie twang.

Find out what travel destinations the group will go to as viewers join in a vicarious ride with Baste when he and the gang explore the countryside. Make sure you're booked for the Lakbai premiere episode on Sunday, May 21 at 8:45 PM after the PBA tourney on TV5.

"I've always produced travel-related shows because there is so much good stuff we can show. If you travel, what makes it special is not the place you're visiting but the people you travel with," said executive producer Jako de Leon, during the close of the launching program in Aracama Filipino Restaurant at the BGC's Fort Strip.
Labels: #LakbaiONTV5 baste duterte bogart the explorer coach chot reyes kapatid lakbai sboy malicay travel show tv5