Who wouldn't love nuns in sequins, unlikely friendships, and the solidarity of Sisterhood with a happy ending? From it's brightly colored costumes to it's hummable tunes and wholesome message, Sister Act is a family-friendly musical all the way. The big no-nos - sex, drugs, rock 'n roll - play little part in the show (these are nuns, after all) and what violence is seen onstage is largely implied, rather than graphic. 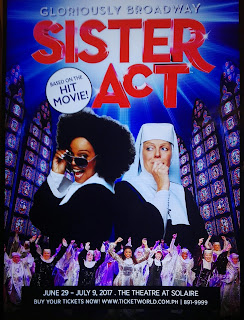 "This is a story about sisterhood, love, and friendship. One of the show's props is a 16-foot Mama Mary figure, aside from 300 other spectacular individual costumes. By the show's end, you all will have spread the love," shared general manager Jo McCrory.

Based on the 1992 film of the same title, Sister Act tells the story of aspiring disco diva Deloris Van Cartier (Dené Hill). Trying to work her way to the top in 1970s Philadelphia, she falls in love with a very tough - and very married - gangster boyfriend named Curtis, and when Deloris witnesses him commit a murder she ends up in hiding on police orders in a convent whose parish has fallen on hard times.

"I'm shy but Delores is the life of the party. I started out in opera before doing theater work. I have appeared in such shows as Dreamgirls, Footloose, Porgy & Bess, La Boheme, Don Giovanni, and The Magic Flute, to name a few," enthused Dené Hill.
"For stamina and staying power, exercise is key! Plus moments of meditation before the show," she added.

Though the sequin-free lifestyle doesn't agree with her, Deloris finds her calling working with the church choir, and breathes new life to the dusty convent while discovering a sisterhood she's never had before.

"We could usually set up for a day but for the Manila run, it took us a day and a half. If we can have any space to move around, we can tell the story just the same," intoned production stage manager Molly Goodwin, during a guided tour around the stage.

The show-stopping Deloris is the heart and soul of this feel-good musical. Her glamorous lifestyle and general fabulousness keeps everyone rooting for her through her journey to the convent, her run-ins with the dour Mother Superior (Rebecca Mason-Wygal) and her inspirational choir numbers; all while evading her boyfriend and the trio of singing gangsters hot on her trail. Modern Broadway ballads make way for rousing all-cast production numbers in the infectious score from eight-time Oscar winner Allan Menken. 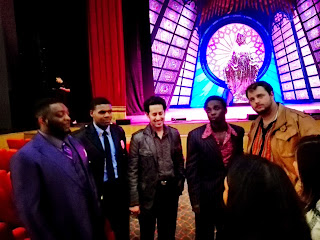 "To hear people laugh and cheer the way they do at Sister Act - a show people think they know but are pleasantly surprised to discover is not what they are expecting - is a magical experience for a producer," says show producer Whoopi Goldberg, who also played the lead role in the 1992 Hollywood blockbuster.

After it's successful two-week Manila run, Sister Act will sail to Guangzhou to regale Chinese fans of the show.