Blackbird is a play written in 2005 by Scottish playwright David Harrower that debuted in Edinburgh. It was inspired by the crimes of sex offender Toby Studebaker and depicts a young woman, Una (Mikki Bradshaw-Volante), meeting a middle-aged man, Ray, aka Peter (Bart Guingona), fifteen years after being sexually-abused by him when she was twelve. 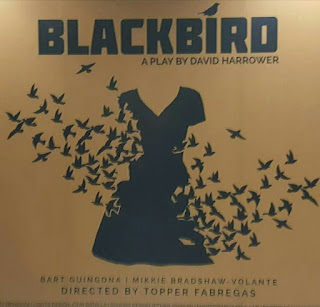 Una, now a 27-year-old woman, comes to visit Ray (who has changed his identity to Peter, a successful 55-year-old career man), at his office. They are clearly not comfortable in each other's company, and we soon find out why. Fifteen years before, when Una was barely a teenager, Ray seduced her over the course of three months and finally took her away to a seaside motel for the weekend.

"It's not the long lines that's hard, but the 'Mamet speak' dialogue delivery. All the emotions you rack up here are all horrible feelings and I had to go through all them on a daily basis. Our characters are standing on platforms of dread, scorn, and anger, especially Una's character.

"Societal mores can contribute damage to what's already there, liking adding insult to injury. This is not the kind of play you direct and act in, at the same time, since there is so little space to draw back into," shared Bart Guingona.

Ray spent several years in prison for statutory rape, and Una was ostracized from her community after the incident. Now, she has found him by accident, and the play delves into their comp!ex feelings for each other. Though clearly, and definitional, sexual abuse has occurred, the play that ensues is also part of a love story - a horrible love story, but a love story just the same.

"When it happened, he was 40 years old - already a formed man. Una, my character, was 12 and what happened formed her persona. Something like this will always stay with you," intoned Mikki Bradshaw-Volante.

Winner of the Olivier Award for Best Play, Blackbird is a deeply complex portrayal of two people whose ruined lives are inextricably intertwined.

"This play is one long scene (90 minutes), and the actors had to find the shapes within; it was their challenge; so all the colors come across. We get the rhythm and structure of the play then allow the actors to let loose afterwards and find their respective  zones and spaces. Plus they had to believe, and show, that they were in love at that time in their lives," opined director Topper Fabregas. 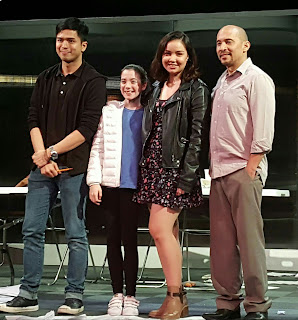 The limited Manila run is currently staged by The Necessary Theater in the Carlos P. Romulo Auditorium at the RCBC Plaza in Makati til the second weekend of September.
Labels: #blackbirdinmanila blackbird olivier awards rcbc plaza the necessary theater