Angelino "Boyet" Fajardo Jr. had to experience blindness for him to see the Light!
Like the apostle Paul who experienced temporary blindness, and become Christianity's staunchest advocate, Boyet, too had to experience loss of vision to see clearly what life truly is.

Enlightenment comes to every one: For some sooner than later; for others, it comes in an instant: suddenly, but clearly! 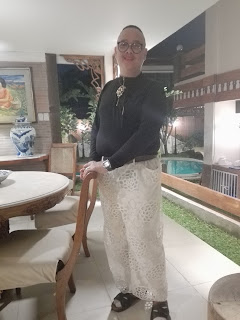 Boyet started his fashion design career at 18, during his sophomore year as a Fine Arts student at the University of Santo Tomas (UST). "I put up a small shop with the help of my mother but nothing came of it. I wanted more in life. I never looked back, I simply moved on. The ploughshares from our carabao that used to till our small farm, were all that remained after my mother sold our only beast of burden to finance my little shop."

The wooden implements adorn the gate of his beautiful Valle Verde home, like a constant reminder to his humble beginnings.

"Luckily, a work grant allowed me to work as an illustrator in Singapore for a made-to-order business. After my Lion City stint, I embarked on a pret-a-porter business around Southeast Asia. Unknown to many, I pioneered the 'Plus Size' clothing for women. Back then, it was simply called 'Extra Large' and were for women from Size 10 to Size 20.

"I chose Singapore over the Middle East, though most of my colleagues preferred the latter destination, because it was the gateway to the rest of Asia as well as Europe. I worked as merchandiser so I could use what I studied for."

His plus-size label, Substance, is continuously reaping the fruits of his pioneering efforts. Early this month, Boyet celebratEd his 37th year in the fashion/retail industry, through an intimate luncheon at the Shang Palace in Makati City.

"I was a product of hard knocks. Me and my colleagues in the business, the other fashion designers, did things slowly but surely. And we did it together. These days, designing has become an 'instant' thing. Anybody with an idea on a sketchpad can call himself a 'designer.'

"Before, all we had was the textile and we did the design. I've always been left-handed because my right hand has been deformed due to a birth defect. Probably because I was a menopausal baby. My mother had me at 47. I am the youngest in a brood of five and was named after my dad, Angelino Sr, who was murdered days before my high school graduation.

"When I returned to Manila, I maintained an atelier in Banawe up until I started filling the racks of department stores. Plus Sizes were a new thing in the Philippines and were mostly shoved towards the back of the racks. Before that, designers had a field day with plump matrons because there were no clothes for them in the department stores. 1993 started the upswing of the Plus Sizes. It was such a huge success that it made me decide to come home for good and leave my equally booming success in Singapore. Since I was like a 'business development officer' in the buying office where I worked, I applied to the Philippine market what I learned in Singapore.

"There is more to life, as well as in my career, than competition. Believe in yourself. If God is within you, everything else will be added unto you."

"The reason why I ended up in the fashion industry is because of my mother, Margarita Cunanan, an accomplished seamstress. She passed on to the afterlife in 2012.

"I ran from home at 16 after graduation and my father's untimely demise. I am a born survivor, palaban ako right from the start. At that young age, I began my career as illustrator with the late Goullee Gorospe; and did the rounds illustrating for other designers like Ben Farrales, Aureo Alonso, and Rose Vale (Ching Santos), who I consider my best employer.

"My inspiration then was to make my mother live a comfortable life. She was suddenly a single parent after my father's sudden death. She has remained to be my driving force 'til now.

"My atelier in Banawe allowed me to network with the Fashion Designers Association of the Philippines (FDAP) until I made a name for myself. I dabbled in made-to-order creations with my mom by my side.

"Unfortunately, success went into my head because I wanted to redeem myself from those who laughed at my misfortunes before. My outburst at a Duty Free counter before may have made a buzz in social media sites but I have reconciled with the store attendant I raised my voice to and has, since then, became a very good friend to him.

"From that point in my life, everything became mechanical and I lost my confidence and that of others. When the people changed how they saw me, I felt the pain. When before I was part of the planning phase of any project, now, I had to make appointments with the many office secretaries that seemed to avoid my calls. It was so painful to know that I was no longer needed."

"Then one day, I became blind. It was such a humbling experience. I called on God like I never did before. My condition was brought about by a cataract issue. I've undergone surgeries for over two years and all were unsuccessful. I was told my case was hopeless and I had no recourse and that only a miracle would save me.

"All of a sudden, I lost everything: Money, family, and friends! Everything became complicated that death would be the sweetest thing. My family sent me to our farm. I thought at first that it would do me well. But I learned it was to get rid of me.
"I attempted suicide twice. First, I looked for the gun that I know was in the house but couldn't find 'coz of my blindness. Next, I went out of the house on a rainy night to be run over by a moving vehicle but was saved by a loyal shop employee who stayed with me in my darkest hours.

"Those were the most trying times of my life. No one was with me. There was no one to turn to except God. I prayed to the Lord for Him to take my life in return for all my excesses in life. Admitting my faults was part of my repentance."

Boyet's road to recovery was a long journey, and one that involved doctors and quacks.

"Being blind necessitated that I go to bed early. To prepare myself to sleep, I listen to a battery-operated radio. One night, I chanced upon Niña Corpuz's 'Magandang Gabi Po Doktor' over DZMM. Their guest, Dr. Minguita Padilla, was talking about a condition very similar to my situation.

"I requested to be patched to the doctor on air but was told to see her at St. Luke's BGC. I was early on the day of my appointment. Then I realized, I've seen all the eye doctors in the Philippines except her. When my turn came, I was simply asked if I had P2,000 with me, which my assistant was lucky to have at hand. I was brought to the Eye Center for laser treatment. My right eye was diagnosed legally blind, while my left eye was diagnosed permanently blind."

"In 10 minutes, I was able to see with my right eye. The reason I was asked if I had P2,000 was because Dr. Mingita thought I was a charity patient; an indigent from the radio program!

"Now, I can read, send text messages, do Facebook. In October 2016, Dr. Padilla operated my permanently blind left eye with corneal transplant. It was very successful, being received by my body well. The procedure was repeated last March and then finally in mid-May. I had a lazy eye condition when my eyes were adjusting it's 20/50 vision. Last June, my cross eyesight was corrected.

"I relate with the travails of Job in the Holy Bible, especially now in the peace of my heart, and its gift of calmness. I am learning much about life. Our abilities must be greater than our disabilities. My advocacies now are centered on inspirational talks with PWDs, giving back to them the insights I've learned, as well as in being an advocate of the Epheta Foundation.

"Now, I visit the Lord everyday in Church, at home in my altar, and in my prayers. Looking for the Church where I was most comfortable, and that I would be at home everyday, and where I could relate the journey of my life took a while of reckoning; until I realized it was the church of my college days, the Blessed National Shrine of Lourdes in Retiro. Since I've already lost my mother and she has passed on, so Mama Mary acts as my mother now. I simply returned to the Church of my youth.

"Seek first the kingdom of God and everything will be added unto you. If everything in you is about God, you'll never go wrong. Love yourself 'coz you'll never be lonely and will always be on the winning side. Everything would start from there. You'll never find it in the wrong place.

"Everything you accumulated will have no value until you share it. Help people who have been loyal to  you. And then you'll see what it's all about. I inspire people that God is within us all, 24/7.

"My life now is all about giving and sharing. The Lord did not get back everything. I got back my sight, my life, my career, and the trust of my former business partners. Marami pa rin syang blessings na tinira, just like what happened in the Book of Job. I had to be blind to see the true vision of sight." 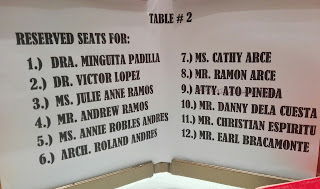