In the line of duty
By Nico Erle Ciriaco

Police stories are tales of crime - a very popular film and television fodder. It is, therefore, normal for themes of these yarns to be filled with policemen tracking down, investigating, and/or solving felonies of all sorts.

Unfortunately, under the present time, policemen are viewed, for the greater part, as the bad guys being pictured by worldwide news on the Philippine crime scene. Our country has suddenly become one police story everyday. Policemen seem to have committed acts that fall under the category of crimes against humanity. 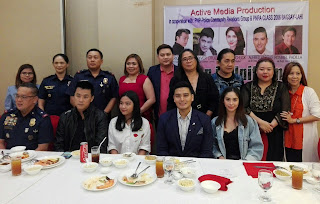 It is in view of the foregoing that the PNP-Police Community Relations Group, together with the PNPA Bagsay-Lahi Class of 2006, is producing a movie entitled "Men In Uniform." The acts of bravery of police officers, their extraordinary courage and professionalism in circumstances of peril, as well as their exemplary performance beyond the call of duty will be brought to the fore in this action-packed docu-drama to be written and directed by Neal Tan.

"The biggest challenge for a project like this is casting. The image of the actors who'll portray the different roles must be credible and believable," declared Tan. Other actors considered for roles in the movie include RK Bagatsing, Dennis Padilla, and Jason Abalos.

Inspired by true stories, the plot will revolve around the exploits of five police personnel. The accounts of these five, among the many men in uniform, who dedicated their lives in the call of duty will encourage the people in bringing back their trust in the police force.

"The movie's storyline will be based on the heroic acts of our men in uniform; in showing the many good sides of the PNP. There are 172,000 active personnel all over the Philippines. Right now, the PNP is in the process of cleaning its ranks.

"Then there's our continued service in Marawi and our involvement in the government's anti-drug campaign. TokHang, which in the Visayan vernacular is a contraction of Toktok Hangyo, and in Tagalog is Katok ng Pagbabago, will be more aggressive in its pleas for change and reforms," declared PC/Supt. Rhodel Orden Sermonia, director of the Police Community Relations Group (PCDG).

Chief Sr. Inspector Rolando Ramos (Alfred Vargas) will be honored, posthumously, for his bravery in leading SPO operatives in a series of buy-busts in different municipalities and provinces in line with the PNP's anti-illegal drugs campaign. Ramos led his team in the sucessful arrest and neutralization of eight drug suspects. He died in the armed encounter with the arrested suspects.

SPO1 Conrado Baldemor (Jeric Raval) has demonstrated extraordinary bravery and dedication to his call of duty when he served as negotiator during a hostage-taking incident that happened inside a public transport bus that saved the lives of a two-year-old child and two female hostages.

PO2 Jumiel Javier (Rayver Cruz) of the PNP's Police Security and Protection Group will also be honored for stopping a robbery on board a moving public transport bus that resulted in the neutralization of three malefactors and saving the lives of the passengers therein.

Supt. David Aragon (Rommel Padilla) heads the Police District Intelligence and Operations Unit. He is behind the neutralization of some of Metro Manila's most notorious carnappers, bank robbers, and motorcycle-riding thief tandems.

SPO1 Melinda Mallari (Empress Schuck) is the chief of the Women and Children's Concern Desk of Bulacan City's police office. She was named as one of the Ten Outstanding Policewomen of the Philippines for bringing to justice hundreds of cases involving abuses toward women and children. 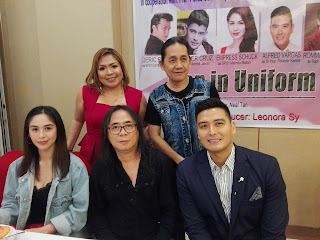 "This movie will dissect how it is to be a policeman, and this includes his family life," intoned the film's co-producer Leonora Casas Sy. Her exposure in posts such as the Criminal Investigation and Detection Group (CIDG) and the PNP's Crime Lab and Regional Internal Affairs, both of Region 1, inspired her to support and aid law enforcers.

"Our policemen may still be heroes in the eyes of a few as I have been a witness to police officers who go above and beyond the call of duty and have devoted their lives to the communities they serve," she added. Currently, Leonora is a Regional Advisory Council member of PNP Region 1.