Of seizures and suicide
By Ed Ciby

PETA presented the Pulitzer Prize-winning drama "Night, Mother" over the weekend to end its 50th theater season. The production is a Filipino adaptation of Marsha Norman's one-act play by Ian Lomongo. 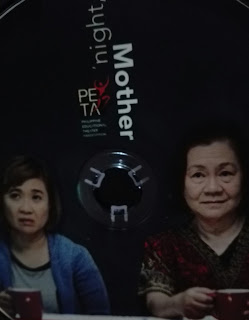 'Night, Mother is a taut and fluid drama by one of America's most talented playwrights. It won the Dramatists Guild's prestigious Hull-Warriner Award, four Tony nominations, the Susan Smith Blackburn Prize, and the Pulitzer Prize in 1983.

It had its world premiere at the American Repertory Theater in Cambridge, Massachusetts in December 1982. It opened on Broadway in March 1983, directed by Tom Moore and starred Anne Pitoniak and Kathy Bates. A film version, featuring Anne Bancroft and Sissy Spacek, was released in 1986. 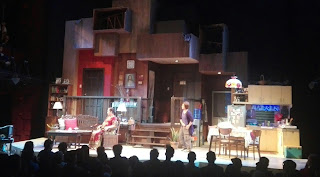 Melvin Lee, who's directing Lamongo's adaptation, said that despite it being written and produced in the early '80s, 'Night, Mother remains to be relevant today as a thought-provoking play that touches on the universal human concerns over family relationships, isolation, alienation, and loneliness. He further noted that the play also talks about issues such as conventional thinking versus new age thinking, and the questioning of the norms of a typical family.

It also brings forth many issues that are rarely talked about, issues that are still considered taboo and shrouded in shame like family dysfunction, mental health, and suicide. It is hoped that this production can serve as a springboard to discuss these sensitive and private issues.

"Thespians Sherry Lara and Eugene Domingo are both stellar performers who embody their roles with luminosity. They discover, probe, and let the scenes come to life through the mastery of their craft. Listen to their banter. Feel their robust exchange of emotions and journey with them as they traverse the world of Thelma and Jessie," remarked Melvin Lee. 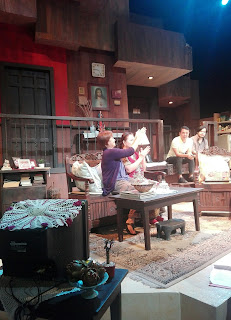 Domingo performs the role of Jessie, a once-married woman suffering from epilepsy who reveals to her mother Thelma (Sherry Lara) of her plans to end her life that very evening. Over the course of 90 minutes, which happens in real time, audiences are made privy to Thelma's desperation in convincing her daughter that life is still worth living for.

The one-and-a-half hour, no intermission, realistic one-act play features the dramaturgy of Eric de la Cruz, the musical score of Vincent de Jesus, the production design of Ben Padero, the costume design of Carlo Tabije, the lighting design of Jonjon Villarreal, the sound design of TJ Ramos, and the technical direction of Barbie Tantioco. The beautifully laid out sets echo Jessie's crumbling state; with some parts of the house's visible interiors slowly giving in to decay.