Asia's Nightingale Lani Misalucha and The Voice Philippines' alumna Morissette Amon pooled their vocal prowesses together in presenting a well-attended, two-night show dubbed as 'A LaniMorissette Musical Journey' at The Theater in Solaire. 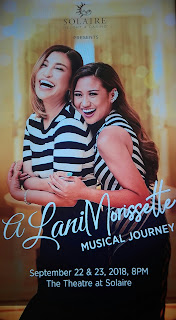 True enough, since the show's title sounded like the name of alternative pop rock princess Alanis Morissette, the duo sang the latter's most enduring hit - Ironic  - from her bestselling debut album 'The Jagged Pill,' after an upbeat song and dance number that opened the show.

Through their spiels and VTRs spliced into the repertoire, the show recounted each of their respective musical journeys. Birit hour commenced with Morissette belting out 'Listen' and her latest single from Star Records, 'Panaginip.'

Lani followed through with a flawless reading of her new song 'Timeless,' showcasing her mettle by riding her perfect pitch in the song's crests and troughs. A seasoned performer, she gave a dramatic, almost theatrical, rendition of 'How Can You Mend a Broken Heart' while recounting her husband's short stint as an overseas contract worker in Saudi Arabia.

This was followed by her Lullaby Suite where she impersonated the voices of Barney and Elmo. She does this, she confessed, whenever she tucks her young grandchildren to bed. Lani even gave a believable 'Louis Armstrong act' with 'What A Wonderful World.' Not a stranger to mimicking other singers' voices, she recalled how this paved the way for her to break into the music industry by first becoming a Multiplex voice guide.

The two singers then went on a 'Multiplex mode' rendition of 'It's All Coming Back To Me Now.' And while on a trip down memory lane, Lani recalled how she become part of the talent searches via the Metropop Songwriting Contest in 1996 by interpreting Jimmy Borja's entry, 'Ang Iibigin Ko'y Ikaw.' She was also quick in pointing out that this was before she had her rhinoplasty.

For her part, Morissette shared a clip of her as a 9-year old contestant singing Alicia Keys' 'If I Ain't Got You.' The two singers then considered what song they'd sing should they join a singing contest now. They chose Judy Garland's ditty from The Wizard of Oz - 'Somewhere Over The Rainbow.'

The ladies came back, resplendent, in red gowns. Morissette began the show's high point with the rock ballad 'The Climb,' followed by Lani belting out 'Healing.' The duo then sang the Mariah Carey-Whitney Houston collaboration  'When You Believe' from the animated feature 'The Prince of Egypt.'

Lani then shared how her classical training came about. She sang the first classical song she learned at eight, 'Ave Maria.' And went on to say how everything went complex from there. She then sang the aria 'Queen of the Night' from Mozart's 'The Magic Flute' which brought the house down.

Morissette then essayed the power rock ballad 'Bohemian Rhapsody.' This is a difficult song to render, mind you. And she gave an excellent rendition. But performing after Lani's rousing aria, the powerful Queen classic just fell flat and unappreciated. I suggest, if this show goes on tour, that Morissette should sing 'Bohemian Rhapsody' before Lani does the Mozart aria. 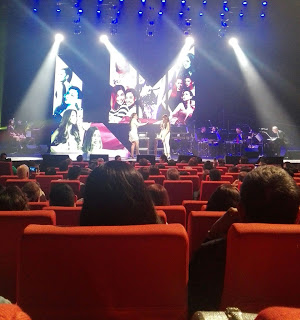 At some point, the two singers were recounting which songs they most usually sang repeatedly in their respective concerts. For Lani, it was Minnie Ripperton's 'Healing' while Morissette's was Mariah Carey's 'Emotion.' They agreed, since they did not want to belt out those songs anymore, that they'd switch places. So Lani sang 'Emotion' as a coloratura soprano and Morissette sang 'Healing' with a whistle tone that she likened to a kettle horn.

They then proceeded in singing their biggest hits. Morissette sang 'Akin Ka Na Lang' and 'Diamante,' while Lani crooned 'Bukas Na Lang Kita Mamahalin' and 'Ikaw Lang Ang Mamahalin.' The duo closed the show with a medley of Aretha Franklin hits - 'A Natural Woman,' 'Respect,' and 'Freeway of Love.'

After a rousing finale, the two chanteuses reappeared for an encore of a bevy of tunes from movie soundtracks ('I Have  Nothing' and 'I Will Always Love You' from The Bodyguard as well as 'My Heart Will Go On' from Titanic), OPM classics ('Narito Ako' and 'Basang-basa sa Ulan'), songs from musicals ('Climb Every Mountain' from The Sound of Music, 'This is the Moment' from Jekyll and Hyde, 'Impossible Dream' from The Man from La Mancha) which the duo tried to sing, hilariously, without hittng the high notes.

Until, exasperated at the effort at trying to control their singing, both belted out 'And I Am Telling You' in true Dreamgirls fashion, mouthing the tune to a crescendo that created the perfect curtain closer. 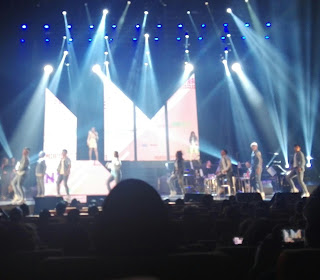 The 'A LaniMorissette Musical Journey' unfolded over the weekend in The Theater at Solaire. Under the musical direction of Louie Ocampo and direction by Carlo Orosa, the two-night show was produced by Solaire Resort & Casino as part of its ongoing OPM Icons series.
Labels: Asia's Nightingale concert icons lani misalucha morissette amon OPM solaire the theater the voice