Band music from the '90s filled The Theater at Solaire on Thanksgiving weekend as members of various bands sang their hit songs to an appreciative audience. The weekend concert, simply dubbed "90s Overload," brought nostalgia and reminiscence from the decade that brought grunge to the mainstream Pinoy music scene. 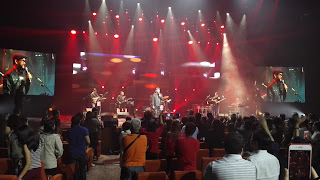 Rockstars and the great bands from the 1990s inspired an entire generation with their music as they easily voiced out the hopes, angst, and struggles of the Gen Y crowd. Rivermaya's lead guitarist Perf de Castro aptly sang the 'theme of the generation' with "Awit Ng Kabataan" while After Image's lead vocalist Wency Cornejo perfectly mouthed the dilemma of times times with "Next in Line," a song he wrote in 1989. Two of his other songs - "Pangarap Ka" and Habang May Buhay" - had the audience jamming on their feet. 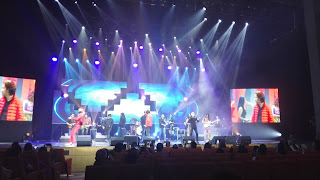 Noel Palomo delivered Siakol's angst-driven ditties with "Bakit Ba?," "Peksman," and "Lakas Tama" as Stephen Lu (shedding off his leather jacket) continued the tirade with Rizal Underground hits like "Sabado Nights" and "Bilanggo," which was penned by Mike Villegas.

The '90s was the time of pagers (remember Pocketbell and Easy call?) and the PLDT phone booths that dotted the entire metropolis. This made it easier for people to communicate, especially for those who went out on dates. Unlike today, with the advent of SMS and personal messages on FB messenger, dating then was more of a commitment once agreed upon. 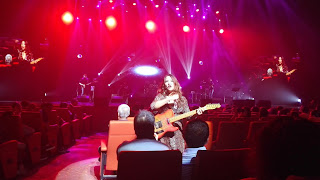 This situation was also reflected in the romantic ballads that came out of that era. Naldy Padilla sang Orient Pearl's "Pagsubok" and "Kasalanan" with Introvoy's drummer Paco Arespacochaga singing his bands' hit songs - "Kailanman," "Di Nako Aasa Pa," and "Line to Heaven while eliciting shrieks from the ladies in the crowd. After all these years, Paco has still retained his heartthrob image. 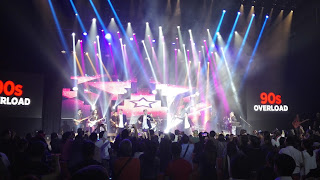 The 1990s was big on massive guitar beats and this showed on most of the compositions of that time. The lady performers of the evening brought this groove back. Cooky Chua of Color it Red essayed the hits songs "Na Naman" and "Paglisan" as Myra Ruaro (aka Skarlet) of Pu3ska mouthed the now-classic "Manila Girl" after doing a cover of No Doubt's "Sunday Morning." For her part, Lei Bautista of Prettier than Pink belted out "Cool Ka Lang" that she named as the 'traffic anthem of the Philippines,' as well as a rousing version of Cranberries' "Zombie."

Despite the love ballads and swinging tunes, rock was the prevalent beat throughout the evening. This was evident in the repertoire of the performers. There's Glenn Jacinto mouthing The Teeth's hits - "Prinsesa" and "Laklak." Ditto Dodong Cruz belting out The Youth's "Multo sa Paningin. Cruz was one of two artists, aside from Lei Bautista, who did covers of foreign acts. He did an excerpt of Madonna's "Crazy for You" while Jek Manuel essayed Nirvana's "Smells Like Teen Spirit." Manuel also crooned First Circle's "Ako'y Sayo at Ika'y Akin Lamang" to the delight of the audience. 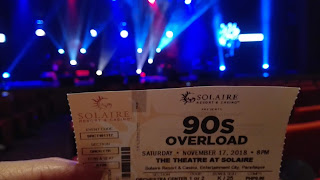 '90s rock music brought its influence to the mainstream music scene and the airwaves, through radio and television, made it possible for the masses to gain access to these tunes. Show annotator Jett Pangan of The Dawn brought the evening to a close with his rendition of "Salamat" that he sang with all the performers on stage.

The night's climax, however, was brought to a plateau when a technical glitch failed to play the Manouvers music on cue. Luckily, Paco Arespacochaga readily offered to play some drum beats for the group so as to cut the anticipation of waiting. After their impromptu dance routine with the drummer, the music blared on and the dancers made their moves; creating a time capsule on the songs from their dance medley.

And as the audience slowly exited from The Theater, hums and lines from the songs performed could still be heard from the throng.
Labels: 90s band concert grunge OPM rock solaire theater