Family, fans, and friends of the late Rico J. Puno gathered at The Theater in Solaire to celebrate the life of an artist whose music helped shape the OPM landscape. Simply dubbed "Music and Laughter: Sana Tatlo Ang Puso Ko," the tribute show featured his two co-performers, two of his best buddies, his son and daughter, as well as two other artists who he had worked closely with in his lifetime. 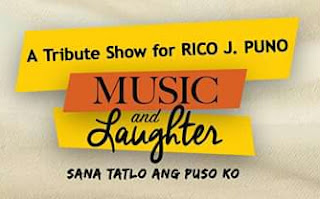 'Music and Laughter' was Rico's show, if not for his passing. His wit and humor would have been perfect for the comedic flair of Giselle Sanchez and Marissa Sanchez. But the show went on as scheduled; salvaged beautifully by the collaboration of the two comediennes, Rico's brood, and his singer pals. 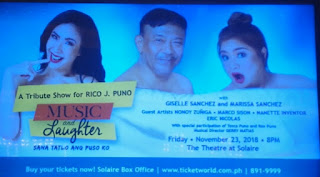 The show opened with Marissa and Giselle singing and dancing to "Copacabana" from Barry Manilow's musical of the same title, complete with Vegas-style backup dancers and choreography. The two ladies then went on a repartee to establish a love triangle with Rico, via the Barbra Streisand and Donna Summer duet "Enough is Enough."

Into this scene enters Eric Nicolas who approximates, with effortless ease, Rico's comedic timing and raspy vocals; even singing a few lines from Rico's hit songs - "Bato sa Buhangin," "Damdamin," and "Alaala," the latter a rewording of Marvin Hamlisch's "The Way We Were," a stance that championed the OPM campaign platform in the '70s. 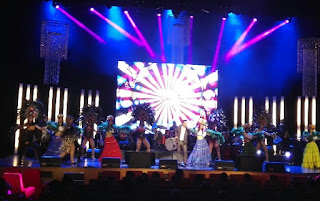 The audience then met Rico's youngest son, Rox, who sang "Together, Forever" as well as "Huling El Bimbo," an Eraseheads original which his dad made a beautiful cover version of, in his lifetime.

Eric then did a series of duets with the ladies - "Magkasuyo" and "Sorry, Pwede Ba?" with Giselle, and ""Magkayakap sa Dilim" with Marissa. In between these songs, however, were loads of ad lib that elicited laughter from an appreciative audience.

Marissa then subjected her pipes to the test with "And I Am Telling You" from the musical 'Dreamgirls' while Giselle regaled the crowd with her rendition of Gloria Gaynor's "I Will Survive" that got interjected with a live banter with male members of the audience.

Rico's daughter, Tosca, then did a duet with her dad with "Kapalaran," in much the same concept as when Natalie Cole sang a duet to his dad Nat's immortal ditty "Unforgettable." She then went on to dedicate George Canseco's "Ikaw" to her father, to the delight of the crowd. 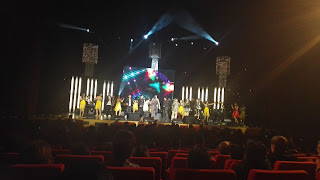 Singer-comedienne Nanette Inventor, who was a long-time back-up vocalist for Rico, sang a moving interpretation of "Buhat." The guy pals then followed suit with Nonoy Zuñiga doing a medley of his hits - "Doon Lang" and "Kumusta Ka" - while Marco Sison got swoons from his classic ballad, "My Love Will See You Through."

The two guys then took turns singing "Lupa," which sounded more like a dirge than a motivation song that night. Rox then joined the two in performing "May Bukas Pa." Centuries earlier, a British poet, Henry Wadsworth Longfellow, wrote the "Psalm of Life." Lines from that thought-provoking poem states that,

"Life is real, life is earnest/ And the grave is not its goal/ Dust though art to dust returnest/ Was not spoken of the soul . . ."

Indeed, men perish and leave this Earth but their memories remain in the hearts and minds of those they had touched in their lifetime. And in Rico's case, it is through his music and laughter.

The show closed, aptly, with the performers singing one of Rico's biggest hits - "Macho Gwapito" - a song that alluded to his many dalliances with the fairer sex. 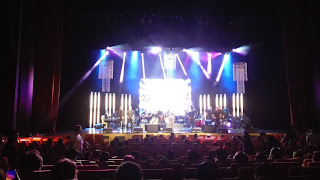 With the many anecdotes shared by his family and friends in their respective spiels, and whenever the audience guffawed to the humor, you could only surmise that Rico is likewise rolling in laughter, close by . . .