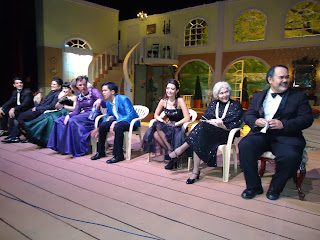 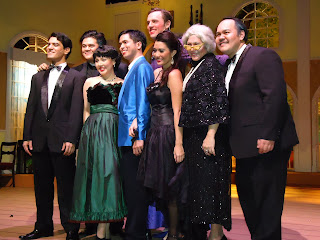 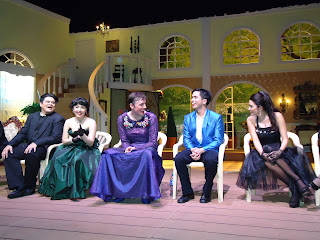 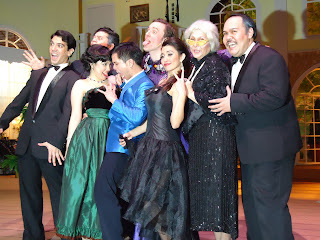 Cross-dressing for the money
By Earl D.C. Bracamonte

“How far would you go for three million dollars?”

Repertory Philippines brightens the Arts (and Love) Month with a comedy from multi-awarded playwright Ken Ludwig – Leading Ladies! Set in York, Pennsylvania circa 1958, this farce centers on two down-on-their-luck Shakespearean actors, Leo Clark (James Stacey) and Jack Gable (Topper Fabregas). The duo discovers through a newspaper ad that Florence (Juno Henares), an ailing elderly woman, has been unable to find Max and Steve, her late sister’s brood who moved away to England as children, in order to include them in her multi-million dollar inheritance.
“I wouldn’t have done this production if I didn’t know I have a good cast. I’m so happy with their work here; they put their backs into it,” shared director Michael Williams, during an intimate media colloquy after the press preview.
The pair then decides to pose as Max and Steve to claim portions of the inheritance money. When they discovered that ‘Max’ and ‘Steve’ are actually sobriquets to ‘Maxine’ and ‘Stephanie,’ they still continue, undaunted, in theater costumes. The duo’s entrance in costume – Leo as Cleopatra and Jack as the winged Titania, Queen of the Fairies (from “A Midsummer Night’s Dream) - is just downright show-stopping. The laughter that breaks the theater’s stillness is worth your money and effort in choosing to watch the play.
“Each of us had different inspirations for our characters. The costume changes are fantastic!” enthused Topper Fabregas.
Now deeply immersed in their sham, Leo falls for Florence’s real niece Meg (Cris Villonco), while Jack swoons (“Give us a hug!”) over Florence’s part-time aide Audrey (Giannina Ocampo). Miraculously, Florence recovers from her condition after the duo settles in. They, nevertheless, decide to keep on: both to try to outlast her failing, yet seemingly-regaining, health and to stay close to the objects of their interest.
“The costumes changes are quite challenging. Apparently, women wear too many accessories,” noted James Stacey on his many changes between men’s and women’s costumes.
Maxine then convinces Meg, who is enamored to Shakespearean plays and an avid fan of Jack and Leo, to put up one of the bard’s productions at Florence’s estate, to give him more of an opportunity to be with her, both as Leo and Maxine. Unbeknownst to the duo, Meg’s fiancé Ducan (Jamie Wilson) grows increasingly suspicious of the “leading ladies,” especially when mute-from-birth Stephanie suddenly regains her speech!
“This is a traditional Rep production with the realistic sets and costume changes. It’s refreshing to work and collaborate with new talent. Better still, it’s gratifying to have the audience at the palm of your hand,” intoned the show’s helmsman.
Directed by Michael Williams, Leading Ladies runs until March 4th at the Onstage Theater in Greenbelt 1. This Ken Ludwig comedy is presented by special arrangement with the Samuel French Inc. For inquiries and/or ticket reservations, simply call Rep through tel. nos. 571-6926 and 571-4941 or log-on to www.repertory.ph. Tickets are also available through TicketWorld’s trunk-line 891-9999 and Web site www.ticketworld.com.ph.
Labels: Philippine production play Repertory Shakespeare theater