Novu creatura fatio - literally meaning "new fashion creation" - is the principle behind revolutionary fashion label Doggficher. After succesfully catching the trained eye of Vogue Italia with his one-of-a-kind accessories that were worn over Randall Solomon's trunk collection during the finale show of the Philippine Fashion Week, there was no stopping Manu Respall from stirring the still waters of the local fashion scene; and ruffling some feathers in the process. 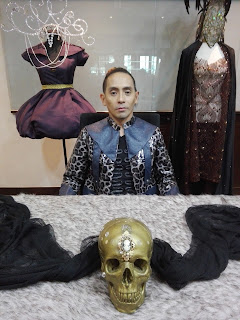 Since then, his works have appeared in fashion editorials of such New York magazines as Pyrexia and Rare. "When my clothes are worn, it's like my babies are born. It's my payback. They're not much use if they stay on display," shared the industrial engineer, who also dabbles in film work. He starred in the critically-acclaimed horror film Yanggaw, a movie helmed by fellow Ilonggo artiste Richard Sommes. 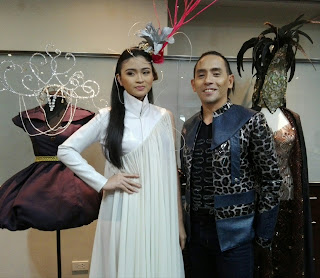 "My creations are post-modern, experimental pieces that push the bounds of established norms. I don't really know how to sew but I create outfits, more like accessories, out of dressing people up. I call it dressery, it's a dress that's also an accessory. They are simply worn over underwear, and voila!, the drama unfolds. 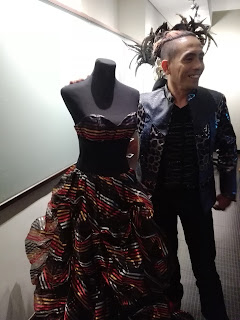 "As an avant garde designer, I make use of very experimental, nature-based, romanticized organic materials like flowers or micro-organism patterns when viewed under the microscope. My creations are for women who are not afraid to show their thoughts to the world. These are the brave souls who make their own statements, beginning with their outfits. I also do pieces for mature women, like the ones worn by actresses Marita Zobel and Tetchie Agbayani during the Philippine Fashion Week show," added Manu, who wants Ellen Adarna and Anne Curtis Smith to don his creations too. 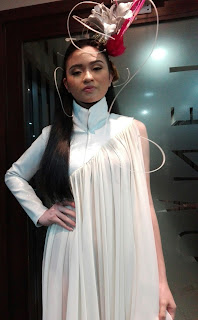 His 'statement outfits' will be worn by host Diana Meneses on the boobtube show The Fiercest of Them All, a reality TV modelling challenge hinged on fantastical elements. "The show is like America's Next Top Model but with a tele-fantasya twist. The models will be given challenges to be overcome with poise. An example is doing ramp modelling on a platform 300 meters over a rushing brook. There will be 16 female contestants who will go through elimation rounds 'til a winner emerges. In fact, to up the ante of the playing field, foreign models were thrown into the competition," added Manu, who seats as the competiton's main juror.

The FOTA finale will also feature the designs of Arnold Galang and John Herrera. Catch the pilot episode with Doggficher muse Diana Meneses on March 5 at 9PM and Sundays thereafter over GMA-7 News TV. 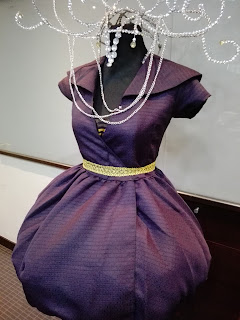 "I just do art. I challenge everyone to come up with real art forms and not just pieces for business and/or consumerism. Form simply follows function," stressed the artiste at the close of an intimate roundtable colloquy.