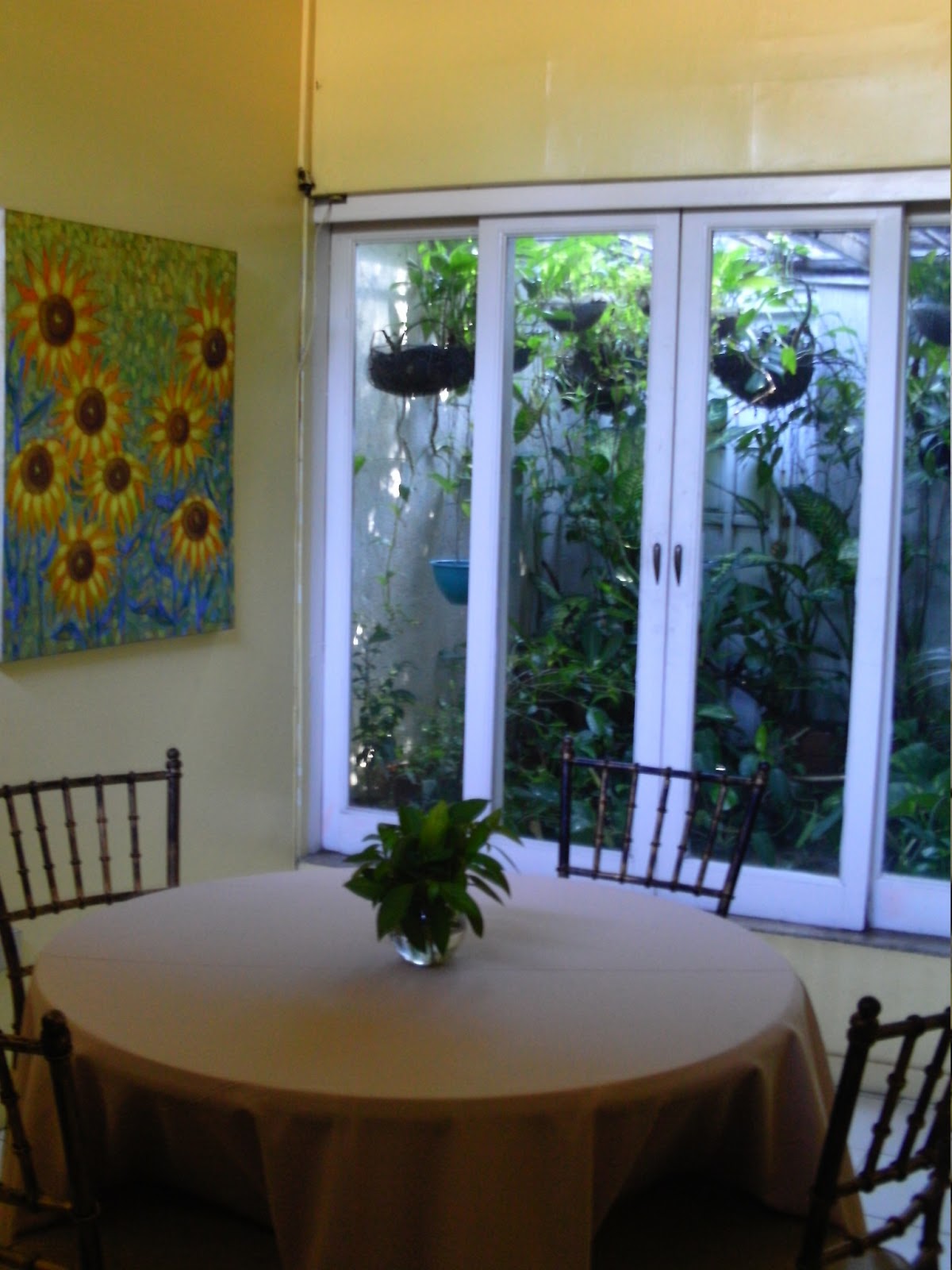 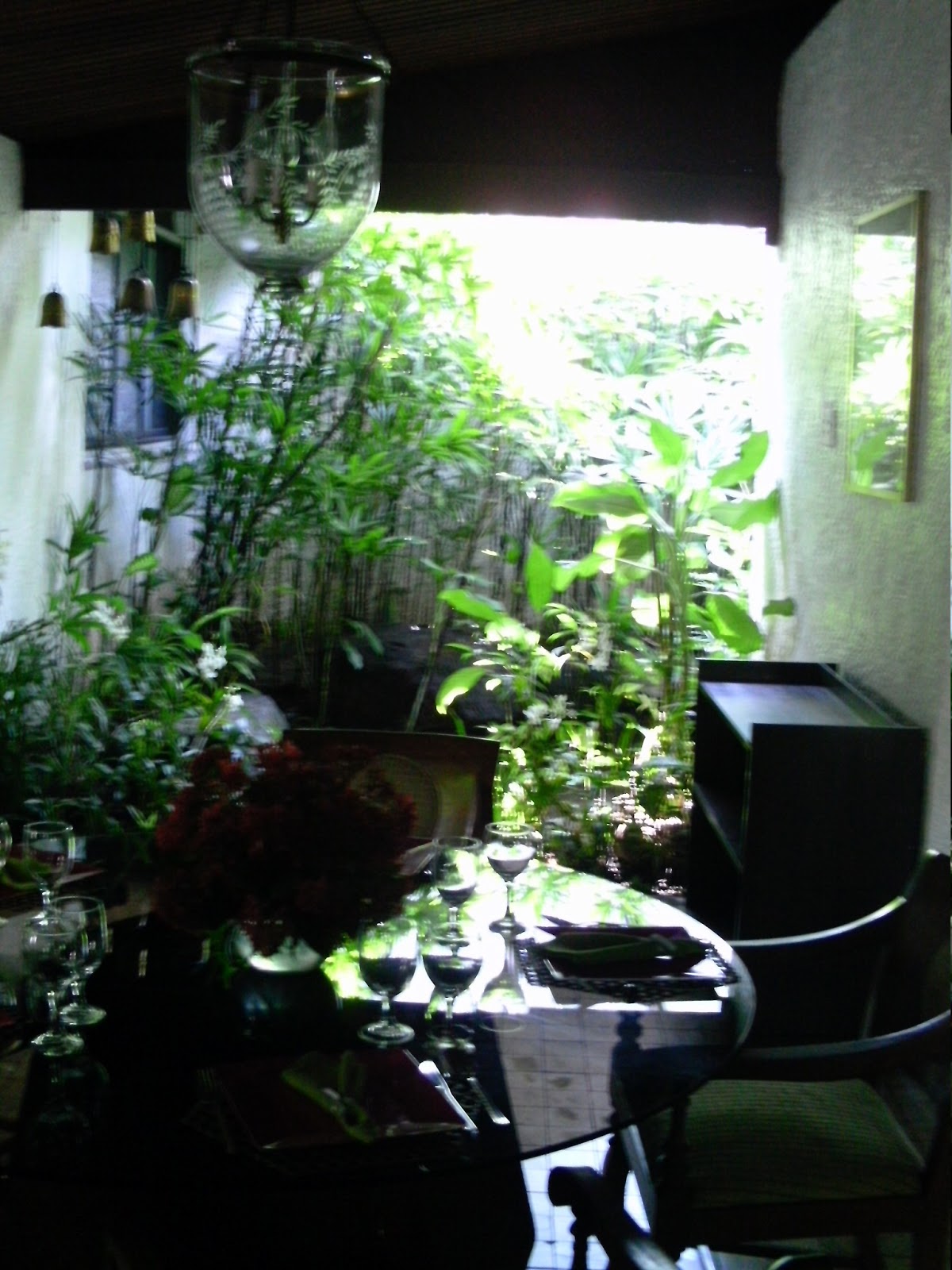 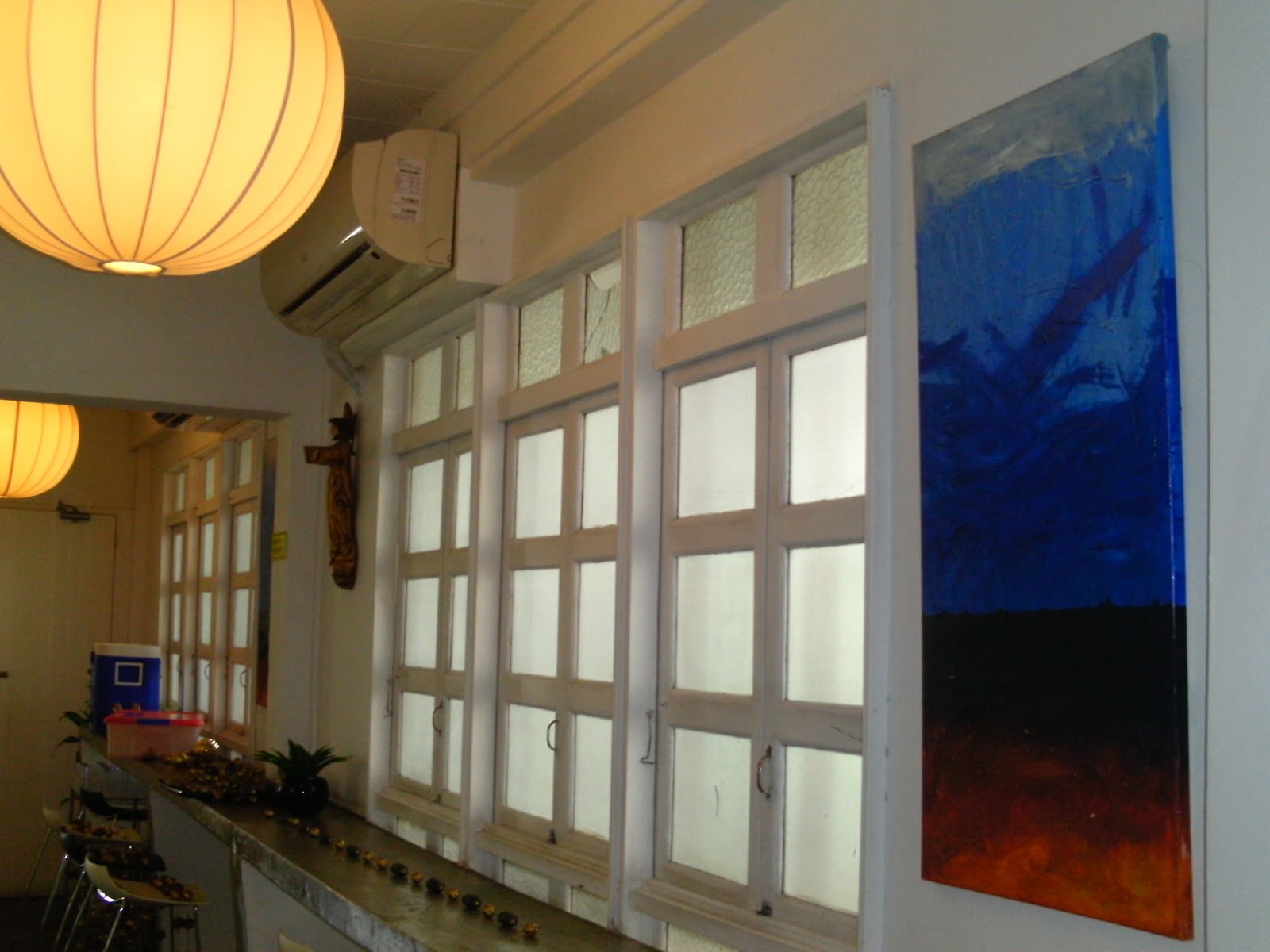 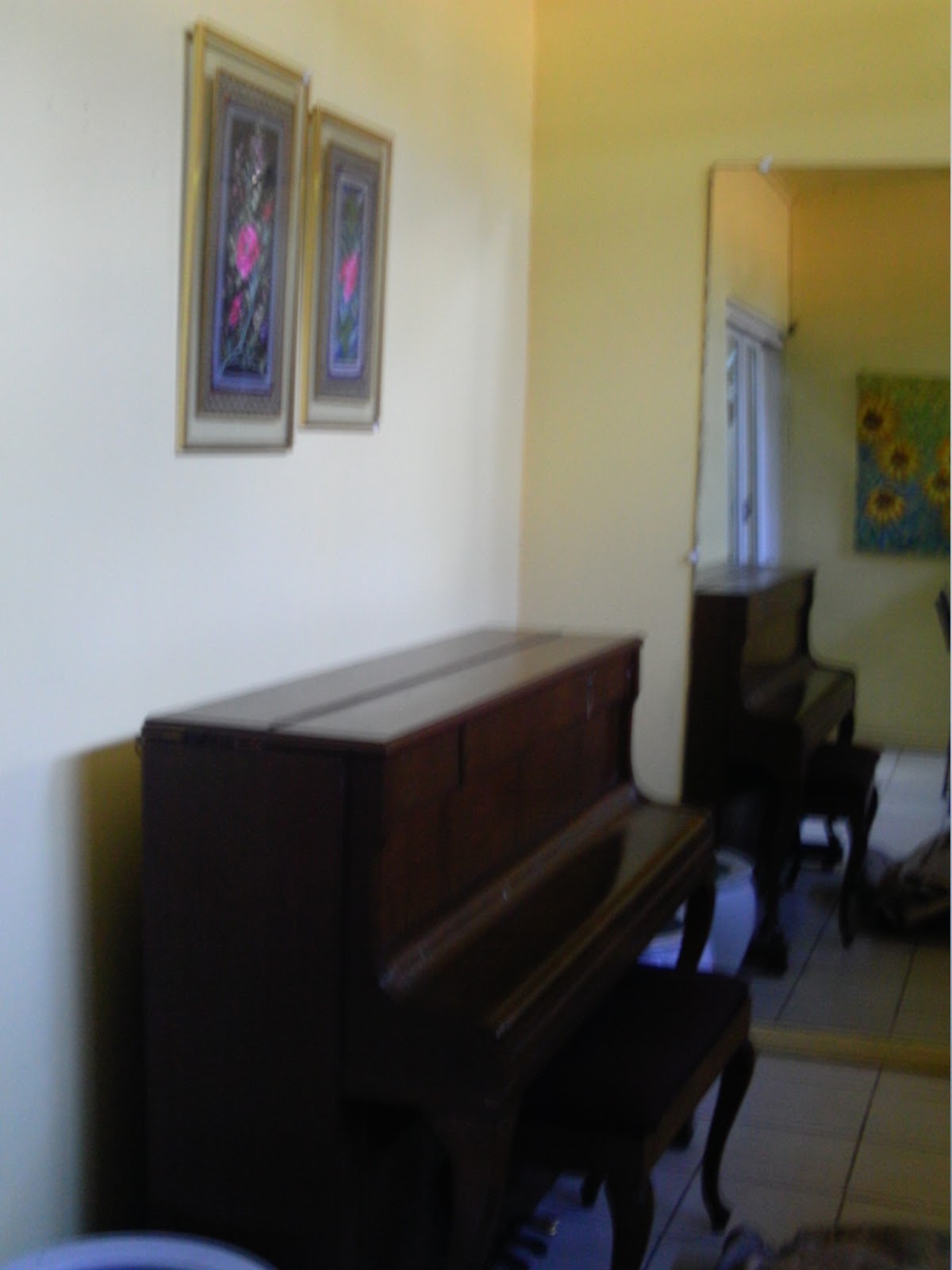 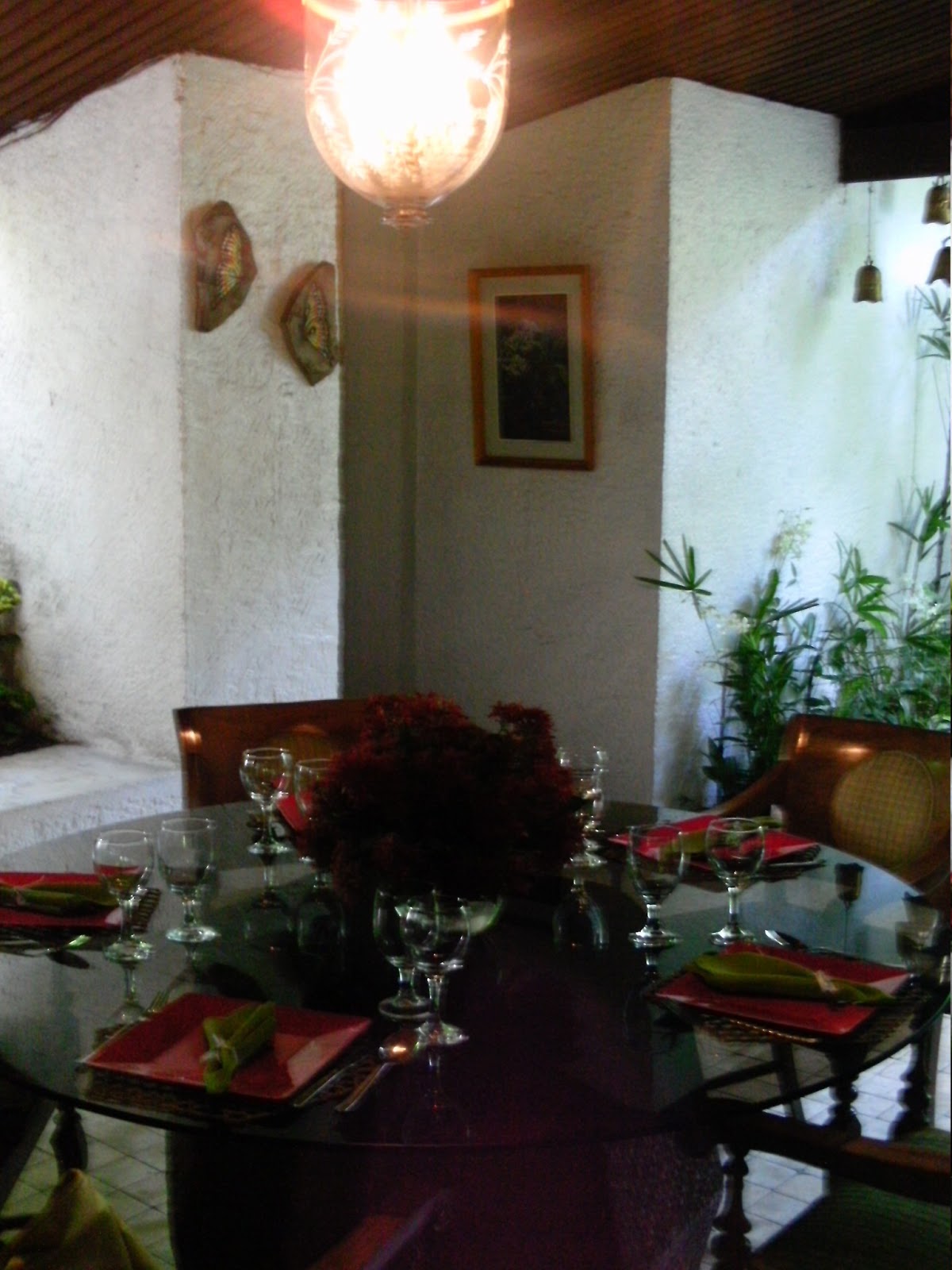 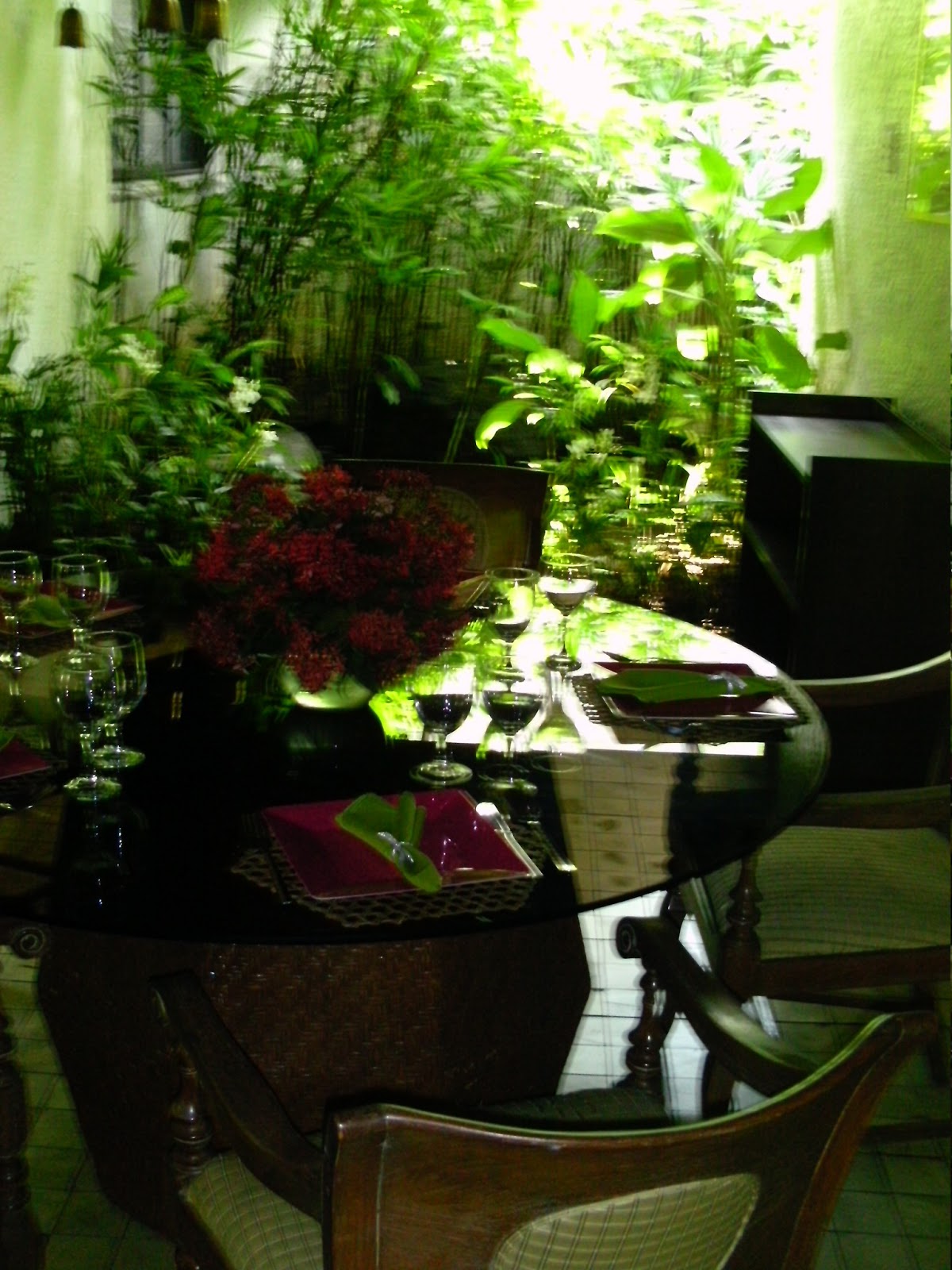 The narrow thoroughfares of Pasay City makes you wish they were made wider especially during heavy downpours and the rush-hour traffic. Passing by these streets would give passers-by the idea that houses within the vicinity must be cramped and compact. However, this notion would be negated outright by one particular dwelling along Zamora Street.
Ensconced in a 3,000-square-meter property of gardens and coi ponds is a hideaway of verdure you'd never think existed in this day and time; where every vacant lot is used commercially down to its last square inch.
Built in 1948, the bungalow residence of National Artist Pablo Antonio at Zamora Street in Pasay City is an enduring model of the stylized Filipino tropical house. Completed in 1950, its massive adobe walls and columns and structured wooden ceiling are balanced by panoramic windows that provide soothing views of the breathtaking greenery surrounding the house. The Antonio residence epitomizes Filipino architecture that is responsive to the climate as well as to the local sensibility for seamless interiors and exterior spaces.
“This house was built 61 years to date. Sweethearts frequent this place; they find it so romantic. They visit it first as a couple and then bring their respective families here afterwards. This is where my atelier is now. We also receive guests here for special events. We can seat 50 covers at night, with some spilling out to the gardens,” enthused fashion designer Malu Antonio-Veloso, eldest and only daughter of the late Antonio couple's brood of five. Her other siblings are Ramon, Chito, Pablo Jr. and their deceased brother Victor.
Guests serve themselves from a buffet spread of delectable dishes that includes their best-selling 'Master Chicken.' The sumptuous fare has Sole Fillet, Pasta with Chorizo Sauce, Black Rice with Mango Cubes, Grilled Tiger Prawns, Leg of Lamb and salad greens. You also get to create your own spring roll using the Malaysian leaf, Cado, with its peculiar crunch and aftertaste. Simply fold the leaf after filling it with minced onion, ginger strips, nuts, cucumber, tomatoes and juan soy. Yummy!
Pablo Severo Antonio Sr., National Artist for Architecture, was born 1902 in Binondo, Manila. He started studying Architecture at the Mapua Institute of Technology, but he finished the course on a scholarship at the University of London in 1927.
“This house has high ceilings so its not stuffy. The garden air cools the house so we have less electricity consumption even in the summer months. The only room that needs air-conditioning when filled is the Yellow Room 'coz it's quite big and seats a number of guests. I originally called this place My Mother's Garden but the DTI informed us that said trade-name is already used by an establishment in Baguio City. So, we settled for Veloso Garden Cafe instead,” Malu informed.
Antonio's buildings are characterized by clean lines, plain surfaces and bold rectangular masses, a departure from the traditionalist and academic style of the period. He founded the League of Architects in 1951 and is considered the foremost modernist architect in the Philippines.
A rundown of his designs would apprise one of his peculiar ingenuity. These structures include the Ideal Theater, Syquia Apartments (circa 1950s), Far Eastern University (FEU) built between 1938-50, Orchid Garden Hotel (circa 1930s), the Felipe Juico Residence in San Francisco del Monte (circa 1950s), the Bel-Air Apartments (1939), one of the tallest Art Deco edifices in the country, and the De La Salle Chapel that was originally completed in 1932, destroyed during World War II, and restored in 1950.
Pablo S. Antonio Sr. received the National Artist distinction in 1976, a year after his demise, for his unique creations and enduring contribution to Philippine architecture and to the developing culture of the nation. Some of his brilliant imprints remain to this day, others have sadly been destroyed, in a state of ruin, and/or demolished. Of his 34 designs, two remain stalwarts: the Manila Polo Club and the White Cross Preventorium.
The former landmark was established in Pasay by then American Governor-General William Cameron Forbes in 1909. Consequently, the Manila Polo Club transferred to McKinley Road at Forbes Park in 1949, where it stands to this day. The sprawling complex was however completed only in 1950 on a 25-acre land and is acclaimed to be one of the most respectable equestrian clubs in the world.
The latter edifice, the Quezon Preventorium, is located along Santolan Road in San Juan, Rizal. It was inaugurated by then Philippine Commonwealth President Manuel L. Quezon on April 19, 1938 as a response to the plague of tuberculosis of which the marginalized populace was most affected during that time. Square in plan with an inner courtyard, it featured an art deco geometries highlighted with a classical relief featuring children in playful gestures; softening the grim picture of the plague.
“It's our parents' love for this house and us their children that wants to let this residential building stay for people to experience in the years to come. Right now, we are completing a book on our father and his architectural exploits. Everybody's welcome here. Simply call for an appointment,” invited Malu.
Like the heroine Mary, from Frances Hodgeon Burnett's classic “The Secret Garden,” daughter Malu Antonio-Veloso enlivens the magic and charm of her mother's garden as well as preserve the architectural legacy of her father that she hopes architecture students, design enthusiasts and the public at large would rediscover time and again.
Interested parties may call the Veloso Garden Cafe through tel. Nos. 232-4573 and 831-8407 or mobile # 0917-6008886.
Labels: architecture art deco cado landmarks league of architects manila polo club modernism national artist pablo antonio quezon preventorium tropical design veloso garden cafe