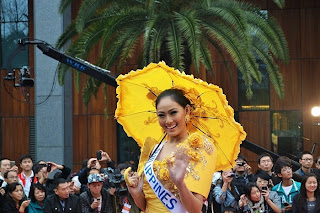 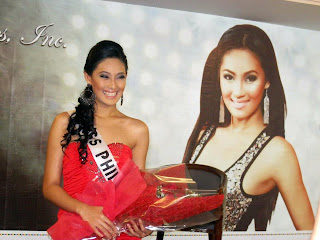 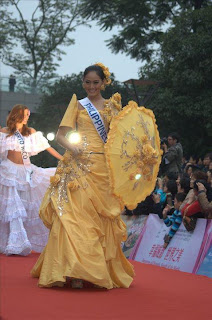 Gearing up for fifth Int’l crown
By Earl D.C. Bracamonte

Members of the tri-media community, together with the Binibining Pilipinas Charities Inc. (BPCI), gave a warm send-off to reigning Bb. Pilipinas-International Dianne Necio recently. Also giving their heart-warming support were the rest of the Bb. Pilipinas 2011 court – Ms. Universe 3rd runner-up Shamcey Supsup, Bb. Pilipinas Tourism Isabella Manjon, runners-up Janine Tugonon and MJ Lastimosa – together with a few past winners.
“I’m so inspired by my family and everybody who believed in me right from the very start. My best weapon is being myself. I constantly remind myself to put all the values I learned into every undertaking big or small. It will simply make you shine above the rest.
“I’m so excited about the entire experience. I’ll definitely enjoy my stay there and do my very best to represent the country. That in itself makes me a winner already,” declared the svelte Nursing coed from Albay, one of the youngest entrants to win the crown, and who’s almost the same age as Melanie Marquez when she bagged the title in 1979.
Dianne had been undergoing rigorous training after she bagged the local crown in April. This included regular workouts at the gym and personality development training with Dale Carnegie. She also took up basic language crash courses in Nippongo, Mandarin and Spanish; languages that she will encounter in the course of the eliminations. Apart from those mentioned, past beauty titlists like Ms. Universe 2010 4th runner-up Venus Raj, who’s a Bicolana like Dianne, and 2008 Bb. Pilipinas International Patricia “Patchot” Fernandez have been preparing her for the rudiments of competition.
“You’ve waited for this moment so long that it’s like you were born for this. So show them who you really are and don’t forget to smile,” advised Patchot, who had the happy task of training Dianne for the international pageant, herself being a finalist in the same competition a few years back.
But personal preparation is what Dianne has been focusing on. In this area, Miss Universe-Philippines 2011 Shamcey Supsup has been of great help. “Shamcey said I shouldn’t be intimidated; that I just believe in myself. She even gave me tips on some of the contestants as she already competed with them in the Miss Universe.”
Dianne left Oct. 20 for Chendu in mainland China where the 2011 Miss International pageant will be held. She’s excited about the flurry of activities that are included in the itinerary, which includes a visit to the panda reserve. She will be spending almost three weeks in China and will compete with the other delegates on November 6th.
“Don’t be pressured and just be yourself. Give all your best and God will bless the rest,” enthused Shamcey.
Dianne is also happy that the competition is held in an Asian country because the locals may be easier to relate to and is closer to home. However, her anticipation is also tinged with a bit of sadness, especially when she recalls her father who passed away almost right after she bagged the Bb. Pilipinas-International title last summer. “Medyo malungkot ako na wala na ang papa ko kasi wala na akong cheering squad leader. Masakit sa loob ko na hindi ko siya makakausap bago ako sumabak sa laban, tulad ng dati. Pero alam ko na he is in a better place now; walang pain, walang sickness, and he will be rooting for me from up there. Kaya lalong meaningful sakin ang pag-suporta ng mga kapwa kong Pinoy. If I win, I’ll dedicate the crown, foremost, to my country and family.”
Her brother Daniel, who was also present during the send-off, simply said that, “Even before everybody cheered for her, it was me first. I’m her No. 1 fan.”
“Offer your performance to the Lord and be inspired by your family. Your victory will make us all proud,” intoned Venus.
So after the ‘major, major’ finish of Venus and the impressive ‘tsunami walk’ that led to Shamcey’s victory, will Dianne bring home the bacon as well? Will the Philippines, yet again, bag the much-coveted international crown?
“After all this is over and if there would be offers in the limelight, I could try. But I’d like to go back to nursing school and finish my studies. Everything just feels so right. So, I’ll release all forms of tension by simply having fun in the pre-pageant activities. I feel so blessed to have been part of all send-offs for the past two years and now it’s my turn to compete. I’m really happy to know that whatever happens, we can rely on the media’s support. Filipinos, in general, are very welcoming. That’s what foreign visitors remember about us,” declared Dianne, before bidding us adieu.
In the past, the title has been won by Gemma Cruz (1964), Aurora Pijuan (1970), Mimelanie Marquez (1979), and Precious Lara Quigaman (2005).
Labels: beauty contests delegates ms. international pageants