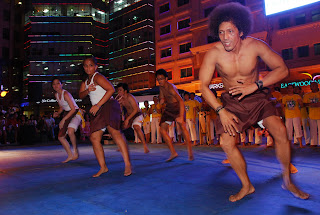 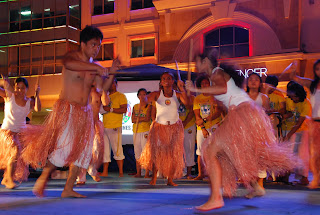 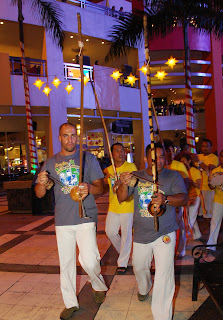 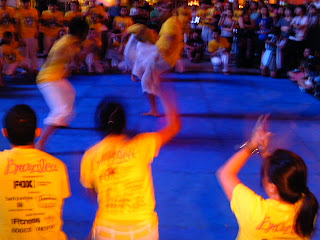 Brazilea, the brand of fashionable flip-flops, supported the efforts of Sinha Bahia de Capoeira as it presented its senior students’ recital of capoeira games and samba performances at the open-air auditorium of the Eastwood Mall in Libis over the weekend. Students from both their Manila and Cebu campuses displayed their skill to a visibly awe-inspired mall crowd. Some shoppers even joined in the capoeira and samba demo lessons while a few lucky mall-goers went home with pairs of Brazilea flip-flops simply by joining in the fun.
The assemblage also coincided with Brasil’s Festa do Mundo 2011, Programa Intercambio Cultural, an annual festival celebrating samba libre and capoeira as art forms. “Capoeira was born in the streets of Brazil. Back in South America, students take their skills to the streets after graduation in a spirit of revelry and fraternity. Festa do Mundo commemorates a week-long celebration of cultural and educational exchanges.
“It takes a year or two of training for a student to be considered a senior. Enthusiasts have started capoeira training as early as 2005 but our school formally conducted classes in 2008 so we are now in our third year,” shared operations head Joseph Pagulayan, whose name in capoeira is “Leao,” a word that literally means “lion.”
Capoeira took shape from the African slaves that were brought by the Portuguese conquistadors unto the Brazilian labor camps. Also considered a martial arts technique, it came about as a means for gaining and fighting for one’s freedom. Once branded as illegal in its early years, capoeira’s graceful movements helped it gain worldwide acceptance.
‘Ginga’ or ‘the swing’ is the basic movement of capoeira. Without it, there’s no capoeira to speak of. The ‘aw’ or the ‘cartwheel’, on the other hand, is the movement that enables the human body to rotate and flex gracefully in all directions.
“‘Capoeira todo mundo’, the motto of this art form, means ‘everyone and everybody.’ So it pretty much says that capoeira is for any age - from kids to adults. The discipline is, however, developed individually. It’s a case to case basis; much like a painting that you work on forever. So no one can claim that they are masters of capoeira. Interested parties can simply visit our school Web site through www.capoeira.com.ph,” Joseph invited.
The Sinha Bahia de Capoeira holds classes every Mondays, Wednesdays and Fridays 8pm at Club 650 in Libis, Eastwood City. For appointments and/or schedules, simply ring them up through mobile # 0915-7695269.
Brazilea’s fun and fashionable flip-flops are available at all leading department stores and sporting goods stores nationwide.
Labels: art capoeira cultural exchange dance festivals school