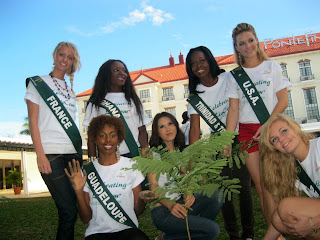 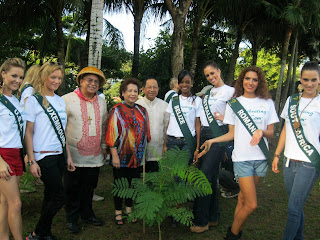 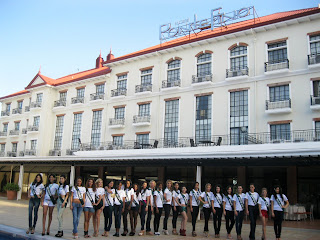 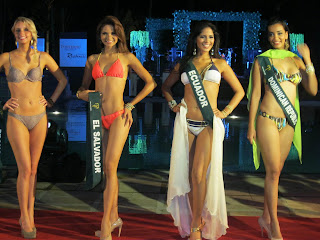 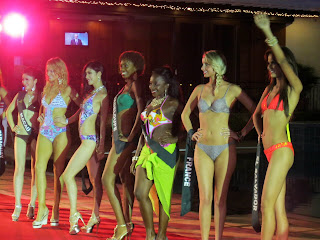 Twenty nine of the 84 delegates in this year’s Miss Earth quest visited the city of Batangas as part of the pageant’s pre-pageant preliminaries. The ladies mesmerized the Batanguenos, and those from nearby locales, as they paraded in their skimpy bikinis, at the newly-refurbished poolside of the Ponte Fino Hotel.
“Ponte Fino came about as a response to the growth of Batangas. It’s an 8.5-hectare prime property in the city’s commercial district; serving as an anchor in serving a fast growing sector. We saw an opportunity to offer convention space to its burgeoning trade and transactions. Aside from the hotel’s 60-room inventory, the second phase of development will launch two 8-storey towers with 105 units of purely residential units while the Residences, right across the hotel, have Victorian townhouses and mix-use shop houses. We will also put up a road that connects straight to SM Mall. The city issued a law now banning plastic and Styrofoam within its bounds. In fact, SM is given a deadline to comply with this directive.
“Batangas is not only a tourist destination but also a good place to retire with its clean & green policies, is close to Metro Manila, the weather’s cooler, schools and employment abound, there’s a bounty of fresh catch and produce including our Barako coffee and we are the jump-off point for the Roll-on, Roll-off (RORO) routes to Southern Philippines.
“Miss Earth candidates will be planting vermilion-colored fire trees around the hotel. These trees offer beautiful foliage in summer,” shared Ms. Fely Ramos, CEO of the realty/estate group.
The continents were well represented by the Miss Earth batch that graced the bustling city over the weekend: North/Central America (USA, Guadeloupe, Belize, US Virgin Islands, Trinidad & Tobago, El Salvador, Dominican Republic, Curacao); South America (Chile, Ecuador, Bolivia, Paraguay); Asia (Japan, Turkey, Macau, Thailand); Europe (Luxembourg, Romania, Slovak Republic, France, Denmark, Belgium, Czech Republic, Scotland, Ireland, Wales); Africa (Ghana, South Africa); and Oceania (Australia).
The Miss Earth’s visit to the city was made possible at the behest of the United States Agency for International Development (USAID) Climate Change and Clean Energy project who supported and sponsored Batangas City in the recently concluded Livable Communities (LIVCOM) Competition, held last Oct 27 ‘til Nov 1 in Songpa, Korea, where Batangas received the Gold Award as one of the most livable communities among the 75 cities who participated. “Batangas City won the gold award for the ‘whole city’ category which showcased the city’s ‘green’ policies and endeavors such as the conduct of greenhouses; as well as the Silver Award in the project category using the city’s recently-passed Environment Code as entry. We brought the Miss Earth candidates here to celebrate the awards and we are proud to partner with Hotel Pontefino for this undertaking. LIVCOM is the only international awards competition endorsed by the United Nations Environmental Program (UNEP) that promotes best practices on local environment management,” declared Divina Chingcuanco, chief of party for USAID’s Climate Change and Clean Energy Project.
“Together with the Miss Earth campaign, the unheard voice of every unborn child for a greener Earth in the future will be heard,” she added.
This year, Miss Earth celebrates the International Year of the Forest. Worldwide efforts to reforest Mother Nature’s denuded forest cover have sparked interest among like-minded peoples and entities all around the globe.
After a tree planting stint, the ladies were regaled with a beautifully presented cultural program at the St. Bridget’s Auditorium; and a fiesta-inspired lunch at the sprawling I & E Training Center refectory where a gustatory spread of local cuisine was proffered.
We then embarked on a guided tour of the Museo Puntong Batangan, with the city’s chief-of-staff Atty. Reginald Dimacuja apprizing us of Batangas’ glorious past. Right upon entry, the lit floors of the ground floor show written portions of written confessions by Filipinos coerced to admit collusion in supporting the insurrection. Written in Spanish, translations to the text are written on the walls right behind it. Scenes of topography, ways of life, means of livelihood, flora & fauna and a historical timeline adorn the walls all over. The folklore that was once “Prinsesa ng Kumintang” now forms part of its colorful history.
From there we were whisked off to the fabulously preserved 1883 Pastor Estate. Atty. Antonio Pastor, great great grandson of the patriarch, and once gobernadocillo of South Luzon, showed us around the property with its collection of impressive, albeit extant, bric-a-brac that, by themselves, told us of the eras that the house saw through. At the center of the spacious sala stood an impressive Bosendorff grand piano that Atty Pastor deftly played; even singing the undying kundiman “Saan Ka Man Naroroon” plus a few classical pieces.
The ladies ran on a very tight and hectic schedule as hours later, they were seen parading in their respective national costumes at the Acacia Hotel in Alabang, Muntinlupa City.
The Miss Earth 2011 coronation rites will unfold this Saturday, Dec. 3rd, at the UP Theatre in Diliman, Quezon City. The pageant’s finals will be beamed live to an international audience thru the StarWorld network and, locally, the following day through ABS-CBN. Check your TV listings and/or broadcast advisories for time(s) of airing. For more information, simply log-on to their We site www.missearth.tv.
Labels: Batangas beauty crusade environment gaiea international pageants miss earth Mother Earth nature portofino swimsuit