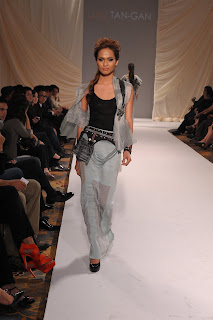 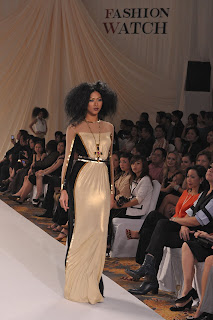 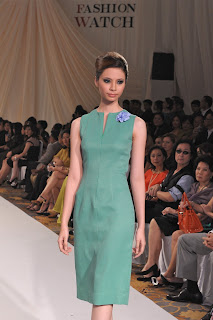 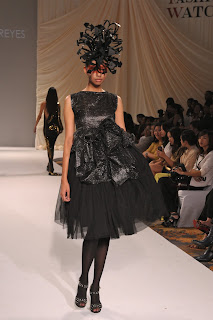 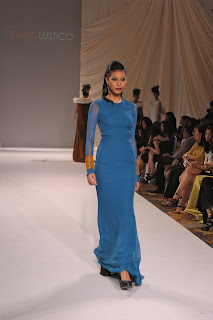 
Twenty one featured designers of the Fashionwatch series presented their forecast of the fashion trends that would dominate the runways as well as the proclivities of fashion plates next year. The projections were presented through an invitational gala at the Rizal Ballroom of Makati Shangri-la.
“A total of twenty one shows, one per week, filled our fashion calendar for the year. 750 creations sashayed through our Lobby Lounge throughout the duration of the fashion series,” enthused Reto Klauser, Shangri-La Makati’s general manager, in his speech.
The preview featured classic cuts as well as come-backing patterns. Ferdi Abuel saw 2012 with sheer body silhouettes and skin-revealing creations featuring lace pants, tiered skirts, and the return of the cummerbund. In the same vein, Ivarluski Aseron also sees the celebration of the female form albeit in a more subtle nuance as shown in peek-a-booed bodices, cut-out patterns, and a fabulous re-definition of the pantsuit. The skin parade takes another affirmation from Alex with his gossamer gowns in white. Men’s fashion for him takes a slightly British vibe with the Mao suit paired with rubber sneakers. OJ Hofer does a Hollywood turn with pink jersey body-huggers that brings to mind Sharon Stone’s scene-stealing scene in the action movie “The Specialist” with Sylvester Stallone. Sexy would really be in next year as Dennis Lustico also came up with sheer serpentinas bearing details as bows and frills.
For his part, JC Buendia goes the classic route with a cream-colored coat-and-tie ensemble while the distaff sported asymmetrical numbers with interesting back details. Francis Libiran sees evenings in all-black numbers with trailed hemlines on latticed bodices. Also on the ebony trail is James Reyes in designs featuring bustle and bouffant skirt with ruched bodices.
Colors too, reminiscent of the Azabache craze in the early 1980s, made a splash on the catwalk. Leading the pack is Ito Curata’s ruffled vermilion number with a tasteful back plunge. Then there’s Joel Escober’s flowing creations in canary yellow. Philip Rodriguez does a royal-hued collection of flimsy floral frocks in varying shades of aubergine: lilac, lavender, and purple.
Arcy Gayatin does a theatrical turn with glamour textiles, sheaths layered over with lace, and an eye-catching peacock plume detail that paired perfectly with a sedate men’s bow-tied suit.
Patrice Ramos-Diaz brings back the palazzo pants while Joji Lloren does an architectural mirage with tent dresses sporting origami pleating. Joey Samson envisions plaid pantsuits while Gian Romano takes costume play (cos-play) and Japanese manga (anime) a notch higher with creations in leather.
High gloss glamour is Jun Escario’s vision with Cleopatra-inspired metallic blocks and models sporting the big, crimped hair of the Flower Power era. Norman Noriega pays homage to Hollywood glamour and the Oscar red-carpet fashion with fully-beaded ermine numbers.
Textile weave is in too with Jerome Lorico’s knitted men’s suiting as well as knitted uneven dresses. Lulu Tan-Gan, on the other hand, plays up the pina/abaca weave with dainty touches of Filipiniana inspirations featuring interesting poncho over-lays as well as tribal cuffs and belts.
“Fashion changes and Fashionwatch is committed to these changes that are altogether new. This fashion series showcase the creativity of various individual works. It is a show of fashion designers for fashion designers; featuring the creations of the best and the brightest,” declared fashion designer par-excellance Inno Sotto.
The Fashionwatch Year-ender show was a fashion forecast show presented by selected members from the Fashion Design Council of the Philippines (FDCP).