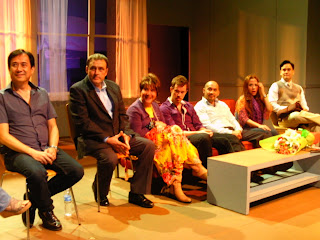 Repertory Philippines opens its 75th theater season with Geoffrey Nauffts’ tragicomedy Next Fall. Directed by Audie Gemora, a born-again Christian of some 25 years, and starred in by Bart Guingona, an avowed atheist; the production is a beautiful celebration of the imperfection of life, the triumph of the human spirit, and the exploration of faith in a modern gay relationship. It is a story that’s hilarious as it is poignant.
“This is a beautifully written piece and I like the honesty of the material. This is how life really is. The Church doesn’t know how to deal with gay relationships and this material gave me an opportunity to shed light on the issue and support life in general. It’s finding faith without judging. Besides, everybody is moved by a love story,” shared director Gemora, a multi-talented artist both in front of and behind the scenes.
While the play takes place between 2000 and 2006 in New York City, the events in the two-act tragicomedy happen in a single day. The present narrative unfolds in a hospital waiting-room where Adam (Bart Guingona), Holly (Leisl Batucan), Brandon (Niccolo Manahan) and Luke’s (David Bianco) biological parents, Butch (Miguel Faustmann) and Arlene (Juno Henares), have gathered after he is hit by a runaway cab.
“This play defends both sides of faith pretty strongly. You’ll sometimes find the boat at one side and then it balances. The story presents the questions worth asking. It made me think about my personal journey, spiritually, many times over; especially that I have to map out the journey of the character I’m playing,” confessed Guingona, himself an accomplished thespian and director.
Interspersed with these chronological scenes are flashback scenes showing how Luke and Adam met, fell in love and constructed a life together with the final flashback occurring on the day before Luke’s mishap.
“It made me realize that life is a more complex than it seems. And that the journeys worth traveling are the ones worth examining. I’m a polar opposite to Audie and I saw his viewpoints all throughout the process in the production from day one,” Guingona added.
Luke is a devout born-again Christian, which creates tension in his relationship with Adam and in his friendships with Brandon and Holly, and leads him to hide both his homosexuality and his relationship with Adam from his equally devout, conservative parents.
“As an actor, I gravitate towards materials that make people think. It is part of my development as an artist,” enthused David Bianco, who plays Adam. In real life, he is happily married to actress-musician Jennifer Blair-Bianco.
In the hospital scenes, Adam, Brandon, Holly and Luke’s parents deal with the fallout from these conflict and secrets, while also struggling to understand what it means to be faithful in the face of the immense unpredictability and fragility of human life.
“Variety is always good for theater. Rep can offer all sorts of stories; so much so if the message is relevant. In this production, we simply present another side of life. Next Fall is the type of play for audiences who think, as the material provokes thought,” stressed associate artistic director Menchu Launchengco-Yulo.
Next Fall was produced on Broadway by Elton John and David Furnish, Barbara Manocherian, Richard Willis, Tom Smedes, Carole L. Haber/Chase Mishkin, Ostar, Anthony Barrile, Michael Palitz, Bob Boyett, James Spry/Catherine Schreiber, Probo Productions, and Roy Furman in association with Naked Angels. It is presented in the Philippines by special arrangement with Creative Artists Agency.
For tickets, inquiries and other information, simply call the Repertory Philippines office through tel. nos. 571-4941 and 571-6926 or email info@repertory.ph. Tickets may also be availed thru Ticketworld (891-9999) box-office or on-line at www.ticketworld.com.ph. The play, Rep’s 409th production to date, runs until Feb. 5th at the Onstage Theater in Greenbelt 1.
Labels: Broadway play Philippine production Repertory theater tragicomedy