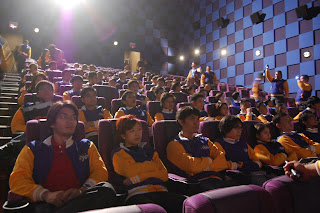 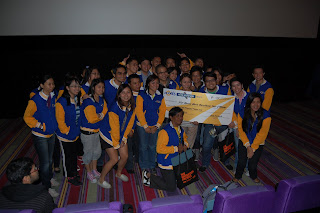 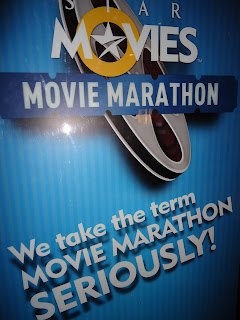 Star Movies continues its search for the most enduring movie buff in the second installment of its Movie Marathon campaign. A hundred movie-loving denizens were randomly picked from a field of more than 50,000 emailed entries that signified their intent to participate.
The movie marathon, which unfolded at the Newport Cinemas inside the sprawling Resorts World Manila, opened at 7am on Jan. 26th with Steven Spielberg’s Oscar-winning movie Schindler’s List. We caught the remaining 35 remaining entrants 14 hours after, watching the tail-end of Bridget Jones’ Diary. They were then requested to remove their jackets and gulp up a bottle of mineral water to get the going much tougher. This is because the rules are plain, simple and non-negotiable: no standing, no sleeping, no bathroom breaks, no SMS and no taking/making calls while the films are being shown. Star Movies’ partner sponsor provided the entrants’ food and beverages. We left when the last film for the evening, Harrison Ford’s adventure flick, “Indiana Jones and the Temple of Doom,” started to roll. Ten marshals went around checking if entrants followed the rules and booted them out of the race the instant they failed to comply. The other screened movies were Jaws (Parts 2 and 3), Paranormal Activity 2, Jaws: The Revenge, and Grease.
Whoever endured the most had the sure chance of taking home P100K, tax-free! Last year, the last 16 remaining entrants agreed to split the prize money among themselves when the clock struck midnight.
So to all who wish to be part in next year’s marathon, start asking yourselves this early: Do you have focus made of steel, an obsession for popcorn, and an undying love for the silver screen? If you said yes to all these then heed Star Movies summons to all movie junkies for the Star Movies Movie Marathon Year 3 in early 2013.
This is the ultimate movie watching that will test your endurance (like holding your pee for more than 15 hours straight sitting down and not dozing off), willpower and absolute dedication to the cinematic experience in which only the toughest and craziest film addicts will survive!
“The Star Movies Movie Marathon was a simple yet out of the box promotion that created a lot of buzz for the channel last year. We are doing it again since the response from our viewers was so good the first time around and of course we want to find out who among them is the craziest and has the most willpower,” shared Jude Turcuato, territory head for Fox Int’l Channels – Philippines.
“In Metro Manila, cable viewership is 35 percent while outside the metro and across the archipelago is less than 10 percent,” he added.
And like that anecdote of a businessmen, who, upon reaching the Dark Continent and seeing barefooted Africans everywhere, sends telegraph to his head office and have thousands of footwear shipped immediately, Fox Philippines also sees potential in an archipelago of people hooked on free TV.
Fox International Channels is the highest rated English Channel; along with HBO, who lords over the movies genre on the boob-tube. As the network with the highest number of programs that include Starworld, National Geographic, Fox News, Channel V, ESPN and Star Sports, Fox enjoys the lion share of the market along with Turner, NBC, Sony (AXN) and HBO amongst others.
Fox offers some 24 channel options on cable television countrywide through its national network of 300 accredited dealers. The Fox International Channels is part of News Corp, the most diversified media/entertainment organization that includes its movie arm 20th Century Fox and Fox Searchlight.
Labels: events marketing campaign movies television