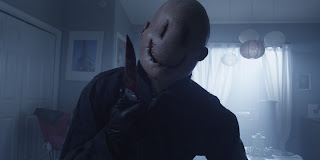 This Valentine weekend, SM Cinema CinExclusive patrons, especially e-PLUS cardholders, gets to enjoy a Back-to-Back Valentine Treat movie package to keep their hearts aflame with the romantic comedy Playing for Keeps and the suspenseful slasher-thriller Smiley.
The latter flick, directed by Michael J. Gallagher and written by Gallagher and Glasgow Phillips, tells the story of a girl named Ashley (Caitlin Gerard), who is now starting a new college life while mourning the recent death of her mentally-challenged mother. She meets some new people there including Binder (Shane Dawson) while at a party and learns about an urban legend of an on-line killer that has the nickname "Smiley." The killer can only be seen on the web and he apparently kills people after they type in "It's all about the lulz"three times. Soon after going that party Ashley and her roommate Proxy (Melanie Papalia) go online to test it out, with horrific results. Soon Ashley becomes extremely paranoid and starts to think she sees Smiley wherever she goes and that he may be chasing her. But how can that be if he is not real? Have they somehow mistakenly released him from the Internet?
Sometimes there are things you want to do, sometimes there are things you have to do and sometimes you just do it for the lulz (colloquial for LOLs – laughing out loud). What once was a cute on-line messenger icon has become the new face of evil.
Meanwhile, making your Valentine date more memorable is a romantic-comedy movie that completes the promotional twin-bill. Playing for Keeps is a family love drama that features an all-star cast led by Gerard Butler, Jessica Biel, Dennis Quaid, Uma Thurman and Catherine Zeta-Jones.
Gerard Butler plays George, a burnt-out professional soccer player who decides to take a break from the professional arena and return to his home town in Virginia. Determined to win back his ex-wife (Jessica Biel) and their son (Noah Lomax), he decides to take the coaching job of their local junior league soccer team. However, with every cougar soccer mom’s eye on his good looks and physique, he has a difficult time focusing on his goals.
e-PLUS Members get a 50% discount on tickets for any of the CinExclusive movies this February. And as an extra treat, they can also enjoy back-to-back screenings of Smiley and Playing for Keeps for the price of one – as a special Valentines offer to SM Cinema’s most loved patrons!
Lovers, families and barkadas will surely enjoy the exciting roster of exclusive movie offerings by SM Cinema’s CinExclusives this February. With SM Cinemas’ premier digital cinemas, exclusive perks and exciting movies, loyal SM Cinema movie goers will be guaranteed unforgettable movie experiences. What better way to celebrate the Love Month than through excellent movie entertainment in the best digital theaters at your favorite SM Cinema!