Highlights Studios Int’l (HSI), in cooperation with World Wildlife & Eco-Registry Foundation, presents this year’s search for Mr. & Miss Ecotourism Philippines. The screening process will play out through an hourly episode for sixteen week on a TV program that will highlight the beautiful people, beautiful places, and beautiful islands of the Philippines.
Dubbed “Manila 2013: Crossing the Greenline,” the show will journey across the archipelago; traversing through our cultural heritage, sampling regional cuisine, as well as search for the finest male and female faces in a national pageant vying for the honor to be named ambassadors of the nation’s environmental platforms.
“I see pageants as a forum for promoting the environmental consciousness campaign. By the third weekend of April, we will have assembled our first batch of qualifiers and continue the screening ‘til the end of May or June. We start shooting the episodes when the newly-elected local government officials start their term in office,” declared Emil Esparrago, managing director of HSI.
The reality TV travelogue and adventure program will cover the nation’s vast cultural landscape while advocating for the preservation and conservation of the country’s diverse habitat. It will also promote health, wellness and the love for Mother Nature by integrating environmental initiatives and pushing for local governments’ development programs.
“This pageant started out as the Mossimo Bikini Summit before it took on the more relevant environmental theme. The swimwear competition will still be part of the search. The pageant will choose the ambassadors who’ll be the spokespersons for the foundation’s continuing advocacy for Mother Nature,” continued Emil, who we learned was a professional wrestler from 1995 through 2005. He is the current coach of the Philippine Wrestling Team.
The pageant seeks to uplift the present status of domestic and local tourism as well as entice other markets to visit, explore, and invest in the various tourism-related projects in the country. The undertaking also seeks to enlighten the Filipino youth on the importance of patriotism and to actively participate in making the Philippines an important ecotourism haven in the world.
“We’d like to encourage tele-viewers to get involved in environmental protection in their own ways. Our stock corporation, Environmental Protection & Conservation Production Inc., visits schools periodically to spearhead reforestation and tree planting activities, and do lectures on waste management and pollution control,” he added.
The Mr. & Ms. Ecotourism 2013 will feature each of the finalist’s places of origin in a delightful and fun-filled reality/documentary film format. Each participating local government unit will showcase different places to see, afford viewers a peek into its delicacies and cuisine, and let spectators experience vicariously the festivities and other important events happening therein.
“All of the 16 regions of the Philippines as well as the 17 component cities and municipalities of Metro Manila will be represented. Except for the final episode that will cover the proclamation & coronation night, all the other episodes will showcase our many ecotourism destinations; highlighting people, places and the environment,” Emil concluded.
The reality TV adventure travelogue will have a complete season of 16 hourly episodes through a weekly nationwide telecast running every Sunday afternoon (4-5pm) from mid-April until September 15 over TV5 network; featuring two major provinces and two minor locales with each episode and highlighting the official candidates in their respective towns and home provinces.
The entire event will culminate with the coronation and proclamation ceremonies of the country’s ambassadors to help in the United Nations continuing environmental awareness campaign. The pageant’s finale will be held in November with all finalists representing the regions of Luzon, Visayas, and Mindanao.
The male & female title holders, their runners-up and special award recipients will each receive cash and valuable prizes packages from the pageant’s sponsors: P150,000 each for the grand winners; P50,000 each for the first runners-up; P20,000 for the second runners-up; and P5,000 each for the three (3) minor award winners.
The on-line screening is going-on. If you are a Filipino citizen, single, between 18-23 years old, good-looking and physically-fit, at least 5’5” for girls and 5’7” for males, and a high school graduate with pleasing personality, then forward your application letter and photos (face close-up and a body-shot in swimwear) to ms2013ecotourism@yahoo.com. For more detailed information, simply get in touch with Highlights Studios Int’l through tel. nos. 415-2972 and/or 448-5762. 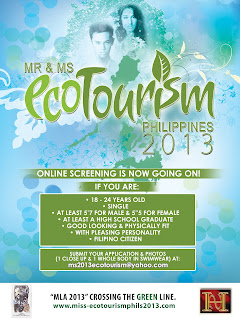