Words of Gratitude
I would like to dedicate this recognition to my mother Lucy Catacutan-Bracamonte, herself an accomplished educator, who taught me to read and write even before my formal schooling began; and to my late father, Asst. Prof. Escolastico Bracamonte, who all his professional life walked the very halls of this august institution and taught many students, including myself; equipping us all with essential skills for modern day living.
He started teaching here right after the Negros Oriental Trade School became the East Visayan School of Arts & Trades, unto the years of the Central Visayas Polytechnic College, and finally, ‘til his retirement from teaching, with the Negros Oriental State University.
Let me take this opportunity, too, to extend my heartfelt and sincerest gratitude to my elementary and high school Alma Mater for bestowing this honor unto me as Outstanding NORSU Alumni in the field of Journalism. 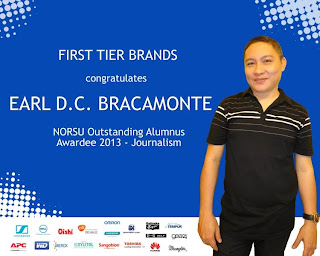 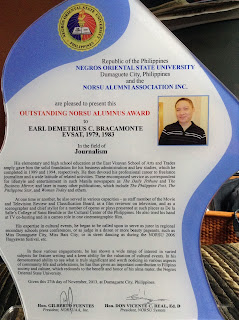 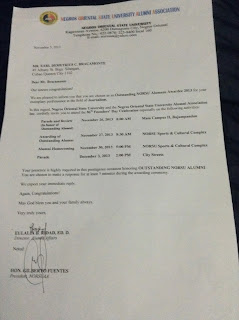 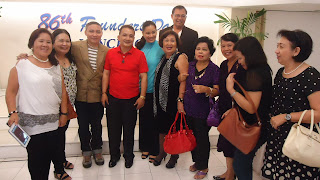 It affirms that being part of all those who are passing through, my efforts and professional pursuits have been recognized as part of the continuum. And for that, I feel magnanimous.

Chosen Career Path
Time and again, it has been said that the pen is mightier than a sword. By just recollecting on the impact of Dr. Jose Rizal’s Noli Me Tangere and El Filibusterismo, we could say it is enough to shape the destiny of a nation. And when you throw in pioneering efforts like the La Solidaridad, then you now look at history, straight in the face.
Lexicons, chief of which is the Merriam-Webster, define journalism as an academic study concerned with the collection and editing of news or the management of a news medium. It is writing designed for publication in a newspaper or magazine.
Journalism, therefore, is writing characterized by a direct presentation of facts or description of events without any attempt at interruption. To an insider, we call that straight news. But it could also be writing designed to appeal to current popular taste or public interest. To this latter definition, any media person worth his salt would recognize as a section or beat under the very broad field of Lifestyle writing.
To the lay person, news and feature story writing can be simply called, interchangeably, as media or press.
These are stories that inform, apprize, entertain, educate and, ultimately, challenge every reader. Keeping abreast with what’s happening around gives one an informed and well thought-of choice. It is a source for weighing the pros and cons before arriving at a sound decision. Lifestyle stories are, simply put, tools for daily living.
To fully understand what lifestyle writing encompasses, let me enumerate some of the fields we cover and write about. Aside from enterprise stories that are culled solely from one’s creative juices, Lifestyle writing includes such fields and disciplines as Arts & Culture, Health & Wellness, Science & Technology, Pageants & Festivals, Stage & Theater, Food & Cuisines, Dance & Performing Arts, Cinema & Film, Architecture & Interior Design, Property/Realty & Homes, Travel & Tourism, People & Places, Music & Live Entertainment, Carriages & Conveyances, Hotels & the Hospitality Industry, Entrepreneurial Efforts, Diplomatic Events, Initiatives and Causes, Campaigns & Crusades, Education & Campuses, as well as History and the Future, and the list goes on and on. What is there now, and will materialize in the future, all these, will surely be covered by Lifestyle writing. In short, it embraces everything happening under the sun. All of these eclectic sources are then chewed by us writers then published for general consumption. And because information is vital to nation-building, it is not surprising that mass media is one of the pillars to any form of government.

Pioneering Exploits
The journey to a thousand miles begins with a single step; and my initial foray into doors of opportunity was possible chiefly because of well-meaning mentors who, because of their wisdom and acumen, saw snatches of raw potential yet to be honed & harnessed.
Permissiveness, while seemingly unneeded in this day and time, was an essential requisite for things to happen in the past. And I thank the late Supt. Ramon D. Gregorio who allowed me to cross over the Girls Trade courses when I decided to pursue Food & Culinary Arts instead of continuing with Electricity under the Boys Trades elective. I am proudly the first one to break the tradition; trailblazing a path that other high school boys, after me, followed. Because I was passionate about food preparation and the science behind it, it was not surprising that I excelled in my new chosen field and became the most proficient; allowing me to compete against other schools in culinary wizardry. Later on, my successful crossover would create a Gender Sensitivity program that allowed both sexes to freely enter into whatever field they want to pursue; no longer restricted to the boys-only and girls-only segregation.
A year prior to that historic crossover, then school paper adviser Mrs. Romillas Necesito invited me to write for the Arts & Trades, the school newsletter. From news & sports writing, I quickly rose to fill the ranks of News Editor then Filipino Editor, a post nobody seemed to take as Tagalog is not the lengua franca of the Visayas. Looking back, I am thankful I took the challenge because in the years that followed when EVSAT competed in the national secondary schools press conference, we were the only school outside Luzon who stood firmly against Tagalog-speaking schools. They were all amazed at how an entrant from a Cebuano-speaking region could beat them at their game. In the years that we participated, we reaped quite a number of accolades and gold medals in the categories we competed in.
In my senior year, when the Arts & Trades became the university-wide school paper, it was renamed the EduTech, I was appointed its editor-in-chief. To date, I was the only high school student to have filled that position. It always went to a college junior or graduating senior. If you asked me then if writing would be my chosen career I would hastily say it was not. But I think I was meant to be a wordsmith early on. I just wasn’t as keen in reading the proverbial writing on the wall. Many years later, the publication industry opened its doors to me. I could say my dream found me; instead of me finding it.
High school graduation time came and I found myself, once again, in the office of the school superintendent, debating on whether or not our batch should be allowed to wear a toga because previous graduates never wore one. I must have worn him down by my repeated persistence because I simply presented our cause for reconsideration every time he said no. The adage, “If at first you don’t succeed, try and try again,” works after all. The following year, EVSAT became CVPC. As the last graduating high school batch, we closed EVSAT’s chapter with a bang!

The Road Less Traveled
On the road to success, many tread on highways but never seem to reach their desired destination. That rings very true because that observation is echoed by a Biblical precept – in that, many are called but few are chosen.
Personal circumstances, stations in life, political affiliations, religious beliefs & dogma, cultural mores, peer pressure, and widespread prejudice are some of the factors that stifle one's climb to the peak of success.
In life's broad avenues of choices, some follow the easy roads that many trek; while others go for uncharted paths and pave the way for others.
The choice, therefore, is either climb the heights and explode brightly then fizzle out; or to simply twinkle ceaselessly and constantly. The long-staying pillars in any industry are not the flash-in-the-pan superstars but those who have climbed each rung of the ladder steadily and surely; displaying patience, perseverance and the indomitability of the human spirit. Because when push comes to shove, the ones at the very top who never toiled are most often the first to go.
I can continue on raving about the ramifications of vices & virtue, but in the end, it all boils down to personal choice. As the opportunities present themselves, in its myriad forms, it is what each one opts for that spells the difference in the long run. It is that very choice that carves our niche under the sun. As an adage aptly puts it, 'we reap what we sow.'
So choose well and wisely, and always seek Divine Providence for every action you make. I can keep extolling on the inspirations that turn dreams & aspirations into fruition, but time is always of the essence. Besides, in the multitude of words, something is always bound to be left out. So let me close my speech by quoting a poem written by Henry Wadsworth Longfellow - A Psalm of Life. The passages from this centuries-old literary gem are as true today as they were before; and well into the far future. It goes . . .

Life is real, life is earnest
And the grave is not its goal
Dust thou art to dust returnest
Was not spoken of the soul

Trust no future however pleasant
Let the Dead past bury its dead
Act! – Act! in the living present
Heart within and God o’erhead

Let us then be up and doing
With a heart for any fate
Still achieving, still pursuing
Learn to labor and to wait.”

Thank you all for listening! And may the many happy returns of the day find you, and find you well! :-)
Labels: 2013 86th founders day alumni award journalism norsu outstanding speech