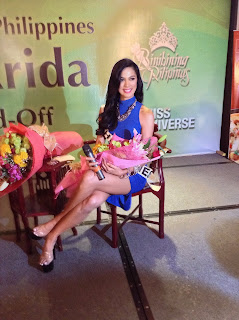 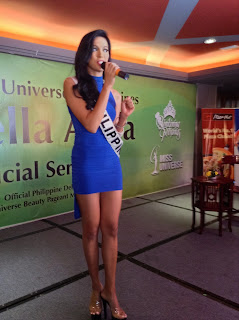 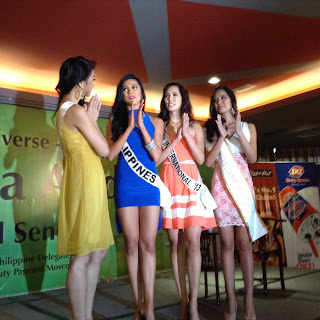 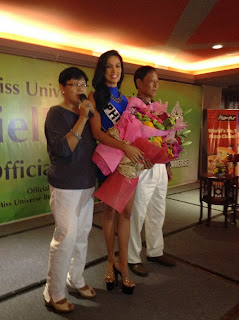 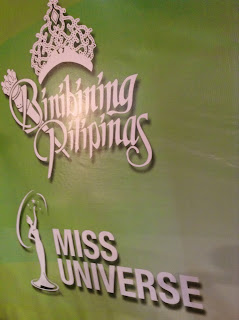 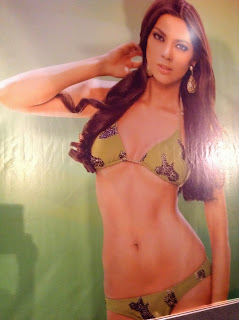 Despite the organizers’ ban on the Philippines from being included in the on-line voting, Miss Universe Philippines 2013 Ariella ‘Ara’ Arida continues to make waves in the ongoing Miss Universe 2013 preliminaries in Moscow.
“Please bring as many votes to the online site. We have no doubt she will bring home the crown,” implored BPCI vice-chairman Conchitina Sevilla-Bernardo, during the send-off party at the Gloria Maris Banquet Hall two days before Ara flew to the Russian capital. Even though this plea has become moot and academic due to the ban, Ara’s chances hasn’t been dampened as evidenced by her stellar showing in all the preliminary phases of the pageant.
“She possesses all the potential to become the country’s 3rd Miss Universe. Her heart is for the country. I therefore throw back to her all the advices she gave me that made me win in Belarus. Have faith in yourself!” challenged Binibini co-winner and reigning Miss Supranational 2013 Mutya Johanna Datul.
Since winning one of the coveted crowns last April during the Binibining Pilipinas Gold, the 24-year-old, 5’8” stunner from Laguna province has undergone months of rigorous training. From personality development, Q & A sessions, speech/language lessons, social graces & deportment, pasarela, hair & makeover courses, gym time, and one-on-one coaching sessions with former Binibinis Venus and Shamcey, Ara has got more than enough help in preparing for the rigors on the global stage. “You are the winner and the crown is yours. Think and believe that you are the winner and everything else follows,” intoned Venus.
“Just be yourself. Don’t pretend to be who you are not. Always be sincere and be confident; all else will be a walk in the park,” concurred Shamcey. Even if it’s a competition, fellow titlists also reminded her to soak up in everything the pageant has to offer. “Just have fun! Enjoy the preliminaries, and immerse yourself in the whole Miss Universe experience,” shared Janine.
Like the Filipino queens before her, Ara is eager to represent the country in the Miss Universe pageant. “I’ve worked very hard to prepare for the pageant. I feel proud to be representing the Philippines, and I am focused on winning the crown for all my kababayan. I want the universe to know that Filipinos are not only a beautiful people, but also raised with a deep love of God and country,” intimated the Chemistry alumna from UP Los Banos. “This is going to be my first time to experience winter and the cold climate. I’m overwhelmed by the support that I’ve been receiving, especially that from the BPCI and Madame Stella Araneta, who’s like a second mom to us all Binibinis. I came from a simple life and did not expect to be where I am now. My gratitude also goes to everyone who never stopped believing in me; they’re my biggest source of strength right now. I’m not just fighting for myself but for the country and I’ll try my very best to meet all the challenges ahead,” she added.
The statuesque beauty from Alaminos will be buoyed by the support of her family, friends, supporters, and her fellow co-winners. “My advice to my daughter is to never listen to bashers, especially their hurtful remarks. As parents, we feel for her too. I remind her to always pray to God; to be her usual self and enjoy the ride. Her strongest virtue is her determination to win the crown. She’s a fighter!” declared Estela ‘Ethel’ Hernandez, who cheered her lovely daughter together with better half Arlesito Arida. Both of Ara’s parents are educators.
“The pressure has been there from the start, ever since I won last summer,” she related. Instead of letting pressure get the best of her, especially after the back-to-back wins of Mutya Johanna Datul and Megan Young in the Miss Supranational and Miss World pageants, Ara has taken things in stride. “It is a good sign that both Mutya and Megan won. They serve as motivation for me to work harder; it pushes me to exert more effort. I face pressure as a motivation to go further.
“The biggest sacrifice any competing titlist undergoes is to cut on her food intake. I’m doing this because I want to arrive in Moscow in tip-top shape. I also miss times with family and friends as I’m focused on my training.
“I respect Russian laws against gay individuals just as I respect the LGBT communities here at the home-front. We simply respect the laws of any country so they get to respect ours in return. In answering the crucial Q & A portions, it boils down to how your heart feels at that exact moment and you simply say what’s in there. It’s not always about the content but how it was delivered. The greatest competitor I have to face would be myself,” confided Ara, who went on to say that her charms are a melding of an exotic Latina and Oriental vibe.
In the 61-year history of the Miss Universe pageant, the Philippines has produced two winners: Gloria Diaz in 1969 and Margarita Moran in 1973. In the last three years, the country has consistently placed in the Top 5; starting with Venus Raj’s major, major finish as 4th Runner-up in 2010.  This was followed by Shamcey Supsup’s now-famous tsunami walk as 3rd Runner-up in 2011, and Janine Tugonon’s near-win as 1st Runner-up last year.
“She’s very positive and driven. We are all waiting for her to grab the limelight,” enthused fellow Gold winner Bea Rose Santiago, Bb. Pilipinas International 2013, who’ll be competing in Tokyo come Dec. 17th.


The 61st edition of the Miss Universe coronation rites will be held on Saturday, Nov. 9th at the Crocus Hall in Moscow. Ara will be competing against 86 other international hopefuls. The proclamation ceremonies will be aired the following day over the StarWorld channel. Check local TV listings for time of airing through the ABS-CBN Kapamilya network. For more updates on the pageant, simply log-on to the Miss U web site, www.missuniverse.com.
Labels: ara ariella arida bb. pilipinas beauty Filipina international pageants miss universe moscow pageant russia