Reigning Miss Universe Philippines 2013 Ariella ‘Ara’ Arida returned to Manila amid cheers and accolades from supporters and fans at her homecoming party inside the Gloria Maris Banquet Hall in Araneta Center. The 24-year-old Chemistry graduate from U.P. Los Banos finished 3rd runner-up to Venezuela’s Gabriela Isler after an impressive showing during the much-anticipated culmination rites in Russia’s Crocus City Hall.
“At the outset, I’d like to thank all my kababayan for the votes and support they’ve given me. I’ve felt their support, especially from Mrs. Stella Marquez de Araneta though she’s far away. I don’t know if I’ll feel totally elated especially with what’s happening in Leyte. I am happy that, in my own little way, I’ve brought back smiles to many Pinoys who have been distraught from the havoc wrecked by typhoon Yolanda.”
The 5’8” stunner from Alaminos, Laguna will be celebrating her silver natal anniversary on Wed, Nov. 20th. “Before my birthday, I’ll have my hair trimmed. I was supposed to get that before leaving for Moscow but I was pressed for time. I will let it stay the same ‘coz this has been my coif ever since. During my training, I missed bread because we were told to stay away from baked goodies. So my carb sources were kamote (sweet potato) and banana.”
Ara was one of the very few lucky candidates who was handpicked to model for the Tony Ward collection during the Moscow Fashion week, and was also among the handful chosen to shoot a commercial for Mercedes Benz’s 2014 marketing blitz. “Everything was memorable. I feel truly blessed to be part of these events because they are ‘big things’ in Russia; that, plus my exposure in Emin’s forthcoming music video. Being picked by corporate sponsors boosted my confidence. During the finals night, everything happened so fast. All we had to do was change into our next outfits. There was no time to chat with my fellow contestants. After the announcement of the Top 16, we were whisked off to separate dressing rooms.
“When I landed on the Top 5, I said, whatever the Lord gives me, I’ll gladly accept. Unlike the preconceived notions circulating in the grapevine, there was a very healthy and friendly environment among us girls. I’m happy with what I’ve achieved so I hope the Filipinos accept that too and focus our energies now in helping others. Miss Venezuela is genuinely nice despite what the other girls say. I became close to her and Misses Spain, Panama, Canada and Brazil during the pre-pageant activities.
“To all those planning to join future beauty contests, just be yourself. Every moment of the pageant is not a competition. Take time to enjoy the activities but do your very best during the preliminaries. During the closed door interviews, I was asked if I felt pressured since pageants are big in the Philippines and I told them that since pressure has always been there, I tend not to think about it.”
In the final Q&A, Ara answered the query by saying, “I do believe we should invest in education and that is my primary advocacy. Education is the primary source and ticket to a better future.”
Ara will be donating part of her prize money for the Yolanda victims. “The devastation has brought such heartbreaking news and loss. Disappointment is my greatest fear thus I always give my all so that in the end I won’t regret anything!”


The Binibining Pilipinas Charities Inc. (BPCI) has also announced that it will be donating P1-million for the Yolanda relief operations. Commenting on the announcement, Ara shared, “I feel happy with the BPCI’s efforts to help our brothers in need. The donation will surely come a long way, and the organization has my full support in future outreach efforts.”
The other members of the Miss Universe 2013 court are Patricia Yurena Rodriguez (Spain), 1st Runner-up; Costanza Baez (Ecuador), 2nd Runner-up; and Jakelyne Oliviera (Brazil), 4th Runner-up. 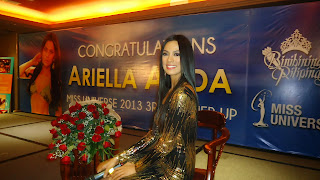 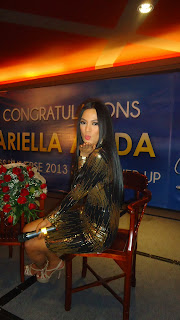 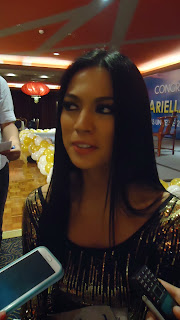 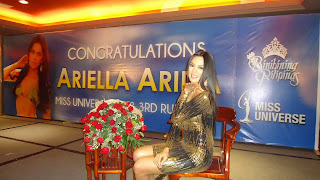 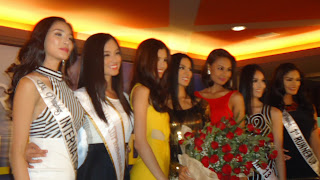