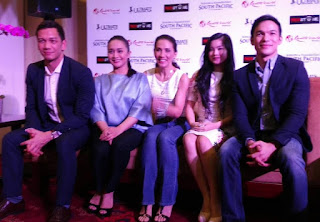 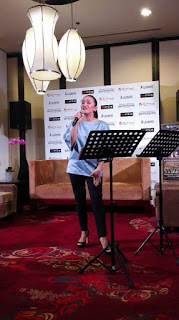 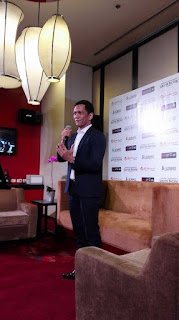 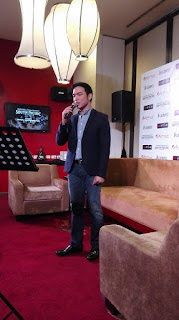 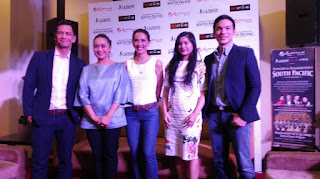 “South Pacific is known for its soaring music that it makes you believe in love and the sublime feelings of bliss. For example, Some Enchanted Evening is sang four times in the entire show but each time it is sang, it presents a new subtext; like a motif in the entire score.
“The musical may be in a hyper-romanticized state yet it presents so many incarnations on the theme of love. It is relevant today as it was before. This production brings South Pacific to a new generation of kids. We live in a very visual culture these days but we still bring the arts to a lot of people in the medium that they understand.
“In essaying the songs, I hold back a little of the classical which is my training. I always find levels of truth in embracing a character,” intoned Jon Meer Vera Perez after singing 'This Nearly Was Mine,' one of the arias of plantation owner Emile de Becque which he portrays.
Slated on back-to-back Saturdays (Sept 12 and 19), the production is David Ives' concert adaptation of the Pulitzer-prize winning novel 'Tales from the South Pacific' by historian James A. Michener. The show marks the first time that a concert adaptation of a major musical will be done in the Philippines. Combining NPAT's state-of-the-art technical facilities with the cast's impressive musical talents, the production has pioneered a new approach to watching stage musicals.
South Pacific chronicles the adventures of Lt. Commander James Michener while serving the US Armed Forces that he wrote in 1947. After winning the Pulitzer, it was made into a musical in 1949 and as a major motion picture thereafter.
Featuring the works of renowned musical theater tandem Rodgers & Hammerstein, the in-concert offers most of the original music that relates a story of love mired with issues of prejudice and racial discrimination all set on a paradisaical island in the South Pacific in the early 1940s.
“Nellie Forbush is from Little Rock, Arkansas. So aside from the accent, which I consider a major challenge, I need to find the definitive reasons for scenes with the character I play and why she thinks the way she does.
“Text work is harder without the movement and tunes as the latter two are what had been guiding me since I started singing at the age of six. The stage came naturally through the encouragement of my parents and mentors from school,” quipped global artiste Joanna Ampil, who sang I'm In Love With A Wonderful Guy with effortless ease.
RWM's South Pacific in-concert is poised to relive another theater classic with performances from lauded thespians Joanna Ampil (Nellie Forbush), Jon Meer Vera Perez (Emile de Becque), Mark Bautista (Lt. Joseph Cable), and Ima Castro (Bloody Mary). The outstanding leads will be joined by an ensemble of the country's finest musical talents that include Michael Williams, Red Concepcion, Hans Eckstein, Raymond Concepcion and Anna Andres (as Liat) among others. The two shows will be accompanied by the music of the 40-piece Manila Philharmonic Orchestra under the baton of Maestro Rodel Colmenar; and helmed by veteran stage performer and director Menchu Lauchengco-Yulo.
“We will do it like the encore special in New York where scenes and dialogue are delivered sans the costumes. It will be about the music and not casting according to type like the role of Bloody Mary which will make it rather difficult to perform in an Asian audience because South Pacific is about racism.
“There will be no sets but a video wall will inspire the idea and milieu. This will be an edited tale with melodies; not quite a concert nor a musical yet still tells a story. In-concert series have not yet been staged in the country so we're excited to do this venture,” shared show director Menchu Lauchengco-Yulo.
Rodgers & Hammerstein's South Pacific in-concert is part of RWM's 6th anniversary celebration that offers audiences a serving of knockout concerts, exclusive events, and big promotional gigs all crammed into three months of non-stop thrills that begun last month.
“I understand any role better with guidance from the show directors especially on the nuances of who I portray. Then I do my research on the physicality of my character; how he looks and how he talks. During the duration of a show that I'm a part of, I do cardio workouts.
“Aladdin is one role I want to play as it speaks to the kid in me. Plus it is something light as against the previous roles I've played in Noli Me Tangere, Marcos, Full Monty and Bituing Walang Ningning,” enthused Mark Bautista after singing 'Younger Than Springtime,' the aria of Lt. Joseph Cable that he plays.
RWM is the first one-stop, non-stop entertainment and leisure destination in the country that features recreational thrills, world-class performances, unique events, and exciting lifestyle options.
Tickets are available at all TicketWorld outlets and at the RWM box-office. For more details, simply visit the company Web site, www.rwmanila.com and/or call tel. no. 908-8833.
Labels: hammerstein in concert james michner musical npat Philippine production rogers rwm show south pacific stage theater