Aptly, this year's edition of the Manila Improv Festival opened with the poem/soliloquy entitled "Feel the Freedom." The night took on a polotical color when repartees and banters hinted at personalities and affairs of the state. 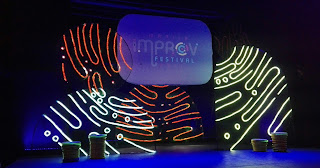 The Lion City's trio, ASAP, played out a 'dramatic' rendition of a soap opera they titled "Breakfast in the City," coining the title from Audrey Hepburn's movie and Sarah Jessica Parker's TV series though the narrative was not about any of the aforementioned productions.

Improvmafia, a duo from the Land Down Under, regaled the audience with vignettes tackling familial issues and domestic affairs. While Gabe Mercado and the SPIT ensemble presented a beauty pageant segment that they dubbed "Miss Fish," where cast members ingeniously weaved marine and maritime issues into their spiels. The group's quick-witted lines simply brought the house down. 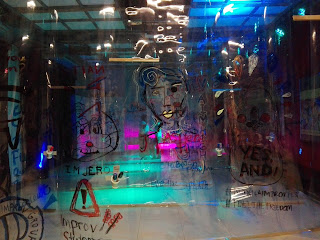 My earliest memory of improvisation would be the film "Punchline" where Tom Hanks and Sally Field tried to outdo each other with glibness before a live audience. After that movie, stand up comedy bars seemed to have sprouted like virtual mushrooms all over Metro Manila.

The success of impromptu delivery has necessitated the rise of improv theater and its steady following. With the platform finding a home at the PETA Theater Center, and its growing international network, the annual Manila Improv Festival is here to stay.

Catch the remaining performances of 170 groups from 70 cities like Beijing, Shanghai, Singapore, as well as Philippine cities like Bacolod, Cagayan de Oro, and Manila that will run until March 27 at the PETA Theater Center.
Labels: #FeelTheFreedom #ManilaImprovRest asap improvisation improvmafia PETA spit theater