Two of the country's finest voices topbilll Solaire's forthcoming maiden show at the newly-opened The Tent on October 20th. Simply dubbed "Kuh Ledesma Christian Bautista Sing Streisand Groban Legrand," the one-night only performance will feature songs that have become the soundtrack of our lives. 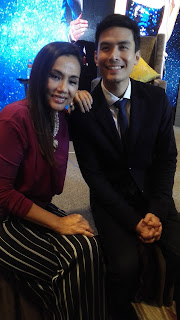 As an advocate of Filipino artists, Solaire showcases yet another pair of brilliant stars - after the successfully staged 'A Lani Morissette Musical Journey' concert - that will serve as the initial offering in the integrated resort's newest event venue, The Tent.

"This is an exciting time for both Christian and I as we will be rendering songs that we love to sing, especially 'Somewhere' (from West Side Story) which is very close to my heart. Streisand became my mentor in voice placement and I emulated her. Cecille Azarcon, on the other hand, was my voice teacher. It was because of Streisand that I learned how to sing hard songs.

"For this show, I would be honored to sing Legrand's 'Umbrellas of Cherbourg' (from Jacques Demy's film "Les Parapluies de Cherbourg'"). And for a switch, I'd be singing Groban's 'To Where You Are' instead of Christian.

"I sincerely hope that OPM, as an organization, would inform us local artists on dates of foreign act shows so we don't perform neck-to-neck with them especially on Valentine's Day. At times, it depends on how exciting you actually make the blitz of a show that really matters," enthused Kuh, who is now on her fourth decade in showbusiness.

The seasoned chanteuse behind the hits like 'Dito Ba?,' 'Til I Met You,' and 'One More Try' started her singing career with the erstwhile Ensalada Band in 1978. This was followed by an impressive stint with the Music & Magic band before going solo.

"I will be putting up my museum next year and it will recount how I found and met Christ in my career as an artist. It is where meaning comes in as to how my journey in life happened. It will be at the Hacienda Isabella and the museum will also display some of my paintings and sculpted works.

"I finished recording an album that contains all songs entitled 'Ikaw.' Also in the works is a book of photos with friends. And then, I'd like to direct a movie one day.

"In the coming show, I would also sing a splice of 'I Believe' and You'll Never Walk Alone' (from Carousel). Teodoro Valencia helped local artists because of an ordinance that required radio stations to play a number of OPM songs for every hour of air play. Sana, there will be somebody like him who will be pushing the envelope again," continued Kuh. 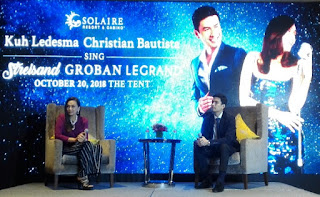 When all the developments will have been completed for the pipelined Solaire projects, it will become a go-to place like Macau. It will be one big entertainment city.

"We are bringing back Filipino music and continue our OPM Series at The Tent, alongside The Theater shows. The big shows help prepare the Pinoy audience to watch our other shows. We have teamed up with the German Club in this new 1.8K -seater venue for the Oktoberfest. Guests can enjoy the food at our buffet spread. Phase 2, which is seven hectares wide, is unfolding very soon," shared Audie Gemora, Solaire's director for entertainment.

With a bevy of highs and lows throughout the years under Kuh and Christian's respective belts, both artists agree that time has allowed them to trans!ate their repertoire into more personal narratives of their lives even beyond the limelight.

Christian cites his relationship with fiancé Kat Ramnani and how she has made an impact to his performances now. "This will be my last concert before I tie the knot."

"I haven't sang 'You're Still You' for a long while. Back in the Star in a Million search, I started with Groban songs," intimated Christian, whose debut single 'The Way You Look at Me' become a hit after exiting from the said search.

"There will always be a niche for OPM. We need to speed things up during the show so medleys would do the trick. I am a witness to the golden age of OPM, the years that followed, and the new digital era that opened doors to everyone who has a dream," he added. 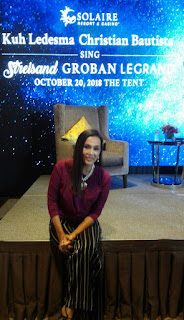 The fans of Streisand, Legrand, and Groban can definitely expect a deeper sense of connection in the songs that will be sung during the show. It will still be the music that they have fallen in love with, time and again.