While Dr. Jose P. Rizal's celerated novel, Noli Me Tangere, reads eloquently in prose, it is equally glib in its translation to classical music; in this instance, as a full-length opera with orchestral arrangements influenced by the kundiman and Western classical music tradition.

"Noli Me Tangere, The Opera" tells the timeless story about love, betrayal, and hope set against a repulsive backdrop of tyranny, torture, and murder. It follows Juan Crisostomo Ibarra (played alternately by Nomher U. Nival and Ivan Nery) who returns to the Philippines after pursuing scholarly studies in Europe. He plans to open up a school and marry Maria Clara (alternately played by Mheco Manlangit and Bianca Lopez), his betrothed. However, parish priest Padre Damaso (alternately played by Nils Flores and Ronaldo Villaruel Abarquez), the archenemy of the Ibarras, is out to hinder Crisostomo's agenda. The opera paints a clear picture of the 'social cancer' that illustrates the rotten system of governance, the illicit way of the church, and the unfavorable trade of the privileged class. 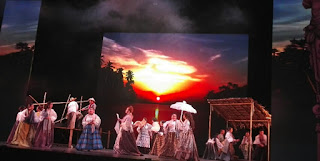 Based on our national hero's 1887 chef-d'oeuvre of the same title, "Noli Me Tangere, The Opera," made its world premiere in 1957 at the Far Eastern University, and featured the music of National Artist Felipe Padilla de Leon and the libretto of National Artist Guillermo Tolentino.

The opera made its CCP debut in 1974. It was restaged at the Tanghalang Nicanor Abelardo in 1987, led by Fides Cuyugan Asensio's Music Theater Foundation. Thereafter, the CCP and J&S Productions presented the 60th anniversary presentation of the opera at the CCP's main theater in 2017. It returned to the CCP last March 2019, breaking box-office records with three sold-out performances, prompting this mid-year rerun.

"We are thrilled that our stage production of Felipe Padilla de Leon and Guillermo Tolentino's 'Noli Me Tangere, The Opera,' which we first produced in New York City in 2013, is back at the CCP this weekend, culminating the 158th birth-anniversary of Dr. Jose P. Rizal," said executive producers Edwin Josue and Jerry Sibal. The latter is the show's director, set, and costume designer.

"Noli Me Tangere, The Opera celebrates the timeless work of our national hero, as well as two national artists, and the immense talent of our young classical singers and musicians. We can't wait to share the magic of this opera, once again, with the CCP audience," the producers added. 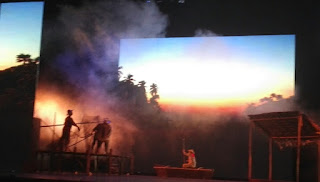 Prior to the 60th anniversary production of the opera at the CCP, J&S Productions premiered the show at the Kaye Playhouse in New York City in 2013. The production also played at the John F. Kennedy Center for the Performing Arts in Washington, D.C. in 2014 and at the Resorts World Manila in the same year.

The 3-day show is presented with mounted LED screens and English subtitles. This weekend rerun is one of the highlights of CCP's 50th anniversary.

Besides this operatic adaptation of Dr. Jose P. Rizal's landmark novel, "Noli Me Tangere" has also been translated into film, television, comic books, musicals, and plays. It is mandated by law to study Dr. Rizal's life and works in high school and college. 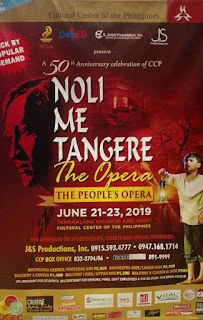