For the thrill-seeker, the ride to the outskirts and/or towns up north and down south in the island province of Catanduanes can be an exhilarating and new experience, even for the jaded sojourner.

It's one meandering ride along feeder roads outside town, whether you take the bus or jitney. The latter transportation mode was utilized during the American Occupation in and around metropolitan areas. It looks like the modern-day jeepney on the exterior, albeit its interior seating is designed like that of a bus. Jitneys ply the routes to and from Virac, the provincial seat of commerce. Sometimes, you get to ride with live fowls gawking at passengers from the laps of its owners. But for the most part, it's with crying babies and betel-chewing folks. 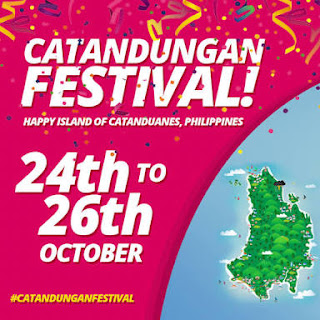 The street dancing parade for the annual Catandungan Festival, Padadyaw sa Tinampo, weaves around the streets of Virac. Revelers dressed in costumes that speak of their entry motif and/or prevalent cottage industry dance to the beat of the drums. The festive fever escalates as the onlookers feel the frenzied gyrations and the heat of the afternoon sun. 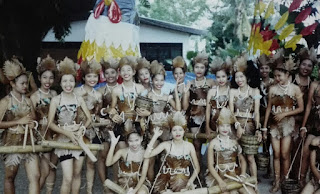 Virac, the capital of Catanduanes, is a coastal town with a gold-sanded shoreline that faces the vast open waters of the Maqueda Channel and the Pacific Ocean. Had it been situated a little farther into the ocean, it could be mistaken as part of the sprawling Micronesia group of islands.

After World War II, Commonwealth Act No. 687 authorized the separation of the sub-province of Catanduanes from the province of Albay, and its establishment as an independent province. Today, that independence and autonomy is commemorated annually with the Catandungan Festival - celebrated every last week of October - on the date of its charter/founding.

Food and crafts are featured in a weeklong agro-fair at the capitol grounds. Booths of the component municipalities offer visitors information on the sights and spots, as well as the industries in each. These include Viga's abaca and hemp, Pandan's fresh catch, Bagamanoc's seafood, Barras' textile, Carramoran's lasa, and Panganiban's verdure, to name a few. 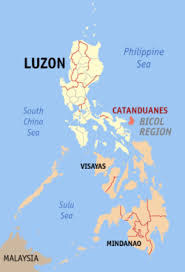 While some road stretches outside the provincial capital are cemented, many others are still unpaved. You'll get the dust on sunny days and the mud when it rains; not to mention the ravines and gorges that dot the entire landscape. Should you plan to visit interior Catanduanes in summer, be sure to wrap your head or you'll get dust-covered hair in shades of ash and brick. Brace yourself, too, coz it's one bumpy ride if you travel inland.

If you ever get caught in a storm, you'll surely get stranded 'til the weather condition abates. Roads become impassable due to landslides. Air and water travel from Virac will also be held in abeyance.

If you're the type who loves to go outdoors enjoying Mother Nature, the province has a lot to offer. Spanning the entire Virac beachfront are pristine, unspoiled waters lapping on fine golden sand. Viewed from atop the Midtown Inn, one can see several sand breaks ideal for surfing. The atolls and reef in Barangay Bugao in Bagamanoc town up north create beautiful surf perfect for boarding. During typhoons, however, the surf can turn into whirlpools that lift water off the ocean's surface, making the spectacle, at once, scary and awesome.

One of the most beautiful places offering the most breathtaking view is located in a place called Cagnipa. It's rare for the sea to be near a cataract, but, here, the cascading waterfalls almost kiss the seawaters at its feet. It is in the forested areas where I got the chance to taste the wild berry, amhi. The said fruit is endemic to the island and can't be found in any other area in the country. The fruit peel is dark-colored but its pulp is light-colored, with its flesh giving off a sweetish-sour taste. The fruit probably grew from the seeds that fell off the beaks of migratory birds from the Pacific region.

Fiestas here are really celebrated. In fact, during one visit to Virac, I was tagged along by friends who have relatives in barangays Cavinitan and Gogon, celebrating their annual feasts. Though not a stranger to Bicolano cuisine, I still opted to partake of the  homemade delicacies and some dishes that were local to the island. Should you wish to sample their food, I recommend pinangat, the Catandungan's version of the laing, which is just as tasty but spiced down for tongues with low tolerance to siling labuyo. Also, try the cosido, a fish stew cooked with fresh tomato halves, shredded Chinese pechay, and green chili peppers. Then there's the pinurpug, a steak dish, as well as the calderetta, that both use carabeef. While elsewhere in the country carabao slaying is outlawed, here, carabaos are bred for consumption.

The festive fiesta spirit is so palpable, you can almost touch it! In any house you'll visit, one delicacy always makes an appearance - the santan! Why it is named after the flower specie remains a point to ponder, even among the townsfolk. It's a concoction of coco milk, muscovado sugar, and pili nuts. It looks like latik but feels and tastes very differently.

Here's a bit of trivia: Did you know that the entire Bicol region (Catanduanes included) has the largest gin consumption in the entire archipelago? And did you also know that it is the womenfolk that drink almost 80 per cent of the total consumption. Lest you wonder which gin label is patronized, it is the Ginebra bilog that they mix with synthetic fruit juice.

Most of its municipalities are represented by beauteous maidens who, in a friendly beauty competition, vie for the honor of being named the province's muse during its annual pageant. 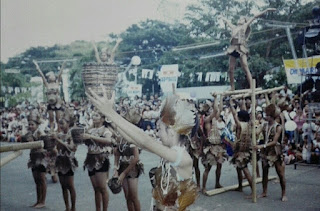 A lighthouse, at the point where the sea laps at the shores nearest the town, still stands to this day. The landmark looms high and mighty despite the passage of time, serving the town like a sentinel on perpetual duty. On clear nights, its beacon is said to reach into the darkest waters of the ocean; luring weary travelers to take a respite from the day's toils.